In the past decade, Cleveland, Ohio has seen the demolition of 8,000 abandoned homes, with more than 5,000 further demolitions planned. Samuel Walker and Emily Rosenman argue that in asking cities with shrinking tax bases to address foreclosures – the aftereffects of the failure of speculative housing finance – the federal government is putting these municipalities in charge of cleaning up the local effects of a national financial crisis.

The last two and a half decades have seen Cleveland, Ohio’s population fall by more than 100,000, and since 2007, 8,000 abandoned homes have been demolished (as shown in Figure 1). With municipal funding, federal grants, and settlements with national mortgage lenders, the city plans to demolish about 5,250 more of around 7,700 remaining vacant structures. Jim Rokakis, Director of the Thriving Communities Institute (TCI) and one of Cleveland’s most vocal supporters of demolition, proclaims that “only by turning the failures of the great recession into green space can [we] stabilize the value of what’s left.” In pursuit of demolition as a strategy to attract economic growth, political actors in Cleveland are aggressively pushing to tear down the city in a desperate attempt to save it. 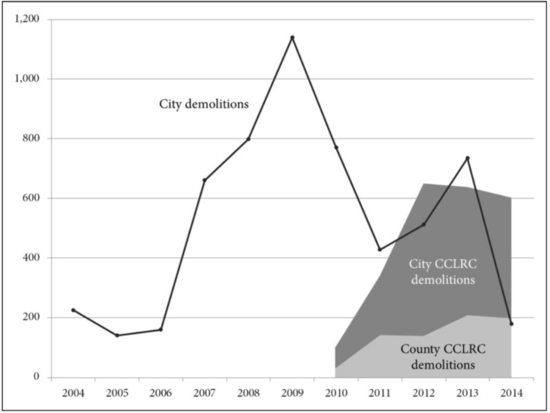 Economists and policymakers blame foreclosed homes for attracting crime and hindering the recovery of property values in Cleveland and other economically depressed US cities. They argue that foreclosed homes prevent cities from attracting investment after the 2007 US subprime loan crisis. In Cleveland, residential abandonment comes after racially-targeted subprime lending in the early 2000s and population decline following decades of deindustrialization and suburban sprawl. Municipal and federal politicians, many homeowners, community development corporations, the Federal Reserve Bank of Cleveland, and even mortgage-holding banks argue that demolition is the best way to revive the investment potential of foreclosed neighborhoods. Many vacant houses have been stripped of anything of value, including copper piping and furnaces, and are located in neighborhoods with extremely low housing prices, making rehabilitation unlikely. While many people in these neighborhoods are sad to see their neighbors’ old houses destroyed, they support demolitions due to quality of life concerns and the effect vacant homes have on other home values.

Digging deeper into the politics of demolition in cities like Cleveland, however, allows us to think about what is behind the spread of these tear-downs, which, to many local residents and politicians, seems like common sense. But what forces are responsible for the demise and abandonment of Cleveland’s houses and how might these forces actually be constraining the city’s housing policy priorities? Our research finds that a local political coalition is behind the promotion of demolition as a solution to the city’s weak housing market. This coalition emerged in the wake of the US government’s failure to reform the structure of the US financial system after the crisis of 2007-2008. Demolition policy in Cleveland illustrates the results of forcing cash-strapped municipalities to deal on their own with a surge of housing abandonment – the localized manifestation of a national financial crisis. 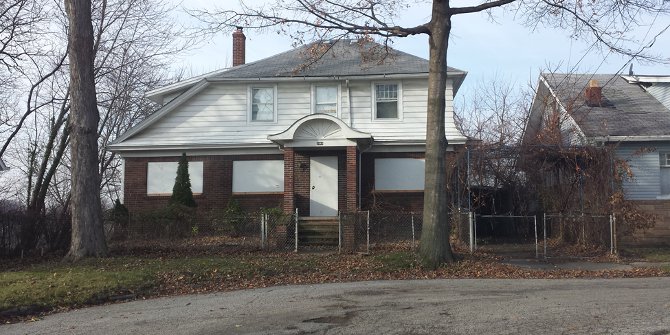 Three important processes contextualize the rise of demolitions as the response to housing abandonment in Cleveland. The first is the US’s general failure to reform the financial system after the 2007-2008 financial crisis. Due to the influence of Wall Street lobbyists, the rotating door of financial elite and government policymakers, and the expansion of speculative finance to the point that major banks were “too big to fail,” the government’s answer to the crisis was a taxpayer-funded bank bailout rather than structural reform of the banking industry. Asking cities with declining tax bases to pay for demolitions essentially puts these cities in charge of cleaning up the local wreckage of a crisis rooted in problems with the national financial structure. This issue is especially relevant now that the federal government’s (limited) grant funding for high-foreclosure cities has run out.

Cleveland was one of the cities hit hardest and earliest by the foreclosure crisis, even though local actors attempted to restrain subprime lending. As far back as 2002, when the US Federal Reserve Board of Governors failed to take national legal action on subprime lending, local Ohio politicians worked to pass municipal ordinances banning these loans. In 2008, the city filed suit against 21 banks and mortgage lenders, claiming that subprime loans led to the “public nuisance” of abandoned properties. Cleveland’s lawyers highlighted the costs of abandonment, claiming that the scale of these problems – and their link to subprime lending – meant that banks, not cities, should foot the bill. These cases were ultimately unsuccessful on the grounds that the city could not establish that the banks were directly responsible for the abandonment of properties and that, under Ohio state law, municipalities do not have the power to regulate mortgage lenders. In the wake of these failed actions, local organizations are now trying to generate solutions at the local and regional levels.

The second process contextualizing the rise of demolitions is one such solution: the Cuyahoga County Land Bank. The 2004 creation of the land bank sped up the tax foreclosure process, facilitating the demolition of vacant structures. Once these houses are demolished, local municipalities can hold onto vacant lots (often with temporary uses such as urban agriculture) or return them to the market. Passing the Land Bank legislation required convincing Ohio’s right-wing (often rural) representatives that the Land Bank would operate like a private business. It also required a funding structure that would not necessitate new taxes (the bank is instead funded with penalties and interest on delinquent property taxes). Here we see how a market-based logic underlies state intervention in the post-crisis housing market. We also see how a policy focus on the re-marketization of vacant land eclipses attention to the housing crisis caused by evictions and foreclosures.

The third process revolves around the politics of demolition funding. High-vacancy cities like Cleveland must compete for access to demolition funding from the federal government and the settlements of federal lawsuits against Wells Fargo and other banks. Now that federal funds have largely run out, cities are turning to the municipal bond market – now used to fund almost all large public infrastructure investments in US cities – to pay for demolition. After a study showed that the impacts of foreclosure had spread beyond the inner city, for example, suburban municipalities supported a $50 million bond to fund demolitions throughout Cuyahoga County. This effectively places a municipal bet on the idea that demolition will lead to economic growth.

Cleveland is a cautionary example of what can happen when housing is understood more as a financial investment instead of a form of shelter to which everyone should have a right. When the primary policy response to a housing crisis is focused more on salvaging property values than addressing lingering housing needs, perhaps our regional and national political priorities need to be rethought. While demolitions do address the excess of housing stock in cities like Cleveland, their effectiveness is ultimately limited unless regional and national problems of urban sprawl, municipal fragmentation, residential segregation, and a speculative financial system are addressed. Is focusing municipal policy around restoring Cleveland’s attraction to outside capital the best way to secure the city’s future? Why not a right to housing?

This article is based on the paper ’Back-door regionalism and the demolition coalition in Cleveland, Ohio’ in Environment and Planning A,

Emily Rosenman – University of British Columbia
Emily Rosenman is a PhD Candidate in the Geography Department at the University of British Columbia, where she studies urban and economic geography. Her dissertation focuses on the intersections of economic development, social movements, and capital markets. She also conducts research on housing in slow- and no-growth cities, such as Cleveland and post-Katrina New Orleans.