In many states, town and county governments can set local sales tax rates on top of the state sales tax rate.  This results in a highly decentralized sales tax system across the country that leads to substantial variation in local rates across states and within states.

In the absence of local sales taxes, sales tax differentials at state borders average about 1.5 percentage points.  However, these differentials can be much larger.  For example, the Massachusetts sales tax rate is 6.25 percent, but neighboring New Hampshire sets no state sales tax rate.  These large tax differences can result in tax-driven cross-border shopping where individuals shop in neighboring low-tax states in order to avoid high sales taxes.  Empirical evidence suggests that individuals are sensitive to tax differences when deciding where to shop.

In recent research, I model how local governments set tax rates.  Given that jurisdictions care about cross-border shopping, jurisdictions set tax rates in competition with other governments.  For simplicity, consider a case where all towns are identical in every respect except for the fact that some towns are located in high-tax states and other towns are located in low-tax states.  Towns may also differ based on how far they are from the state border.  If towns set local sales tax rates in order to maximize tax revenue, taking as given the state tax rates, what is the equilibrium pattern of local sales tax rates?  Figure 1 shows the predicted pattern of tax rates for towns near a state border.

In Figure 1, simply comparing the state sales tax rates (the difference in the blue lines) shows a large tax differential at the border.  However, comparing the state plus local tax rate (the difference in the total tax rate in red), the tax differential at the border shrinks substantially.  This means that border towns in states with high state taxes set relatively low local tax rates and border towns in states with low state taxes set relatively high local tax rates. Taxes also vary based on proximity to a border; within a high-tax state, towns away from the border set higher taxes than towns near the state border.   Within a low-tax state, towns away from the border set lower taxes than towns near the border. 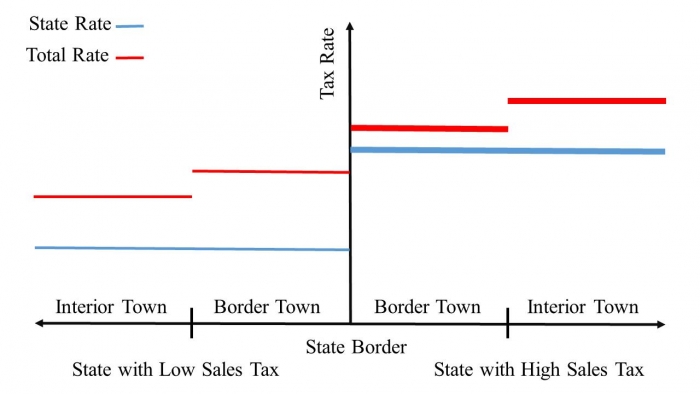 Why does this pattern emerge?  The border town in the low-tax state has the most advantageous position.  This town benefits from capturing cross-border shoppers because it is the first town where residents of the high-tax state can buy low-tax goods.  The reverse is true for the border town in the high-tax state; for this town, it will have many of its residents shopping in the neighboring state and therefore is in a disadvantaged position.  The town benefiting from all the inflows of cross-border shoppers then marks up its tax rate, while the disadvantaged town on the other side of the border marks down its tax rate to reduce the amount of cross-border shopping.

To answer whether this occurs, I use data on the tax rate of every town, county and special district.  I calculate the driving time from every town to the nearest major road intersection of a state border.  This driving time is informative; people in towns with short driving times will have lower costs of cross-border shopping.  Knowing the nearest state border also indicates whether a town is located in a relatively high-tax or low-tax state.  I then compare towns on one side of the border with towns on the other side of the border as well as comparing border towns with towns at the interior of the state.  The idea of comparing towns on opposite sides of the border is that they are on average similar but differ based on the state they are located.

Figure 2 shows that in the neighborhood of the border, local sales tax rates are 1.25 percentage points higher on the low-state tax side than on the high-state tax side.  Recalling that the average state tax differential at the border is approximately 1.50 percentage points, local taxes reduce tax differentials at state borders by over 3/4, which suggests that localities are economically important at reducing cross-border shopping at state borders. 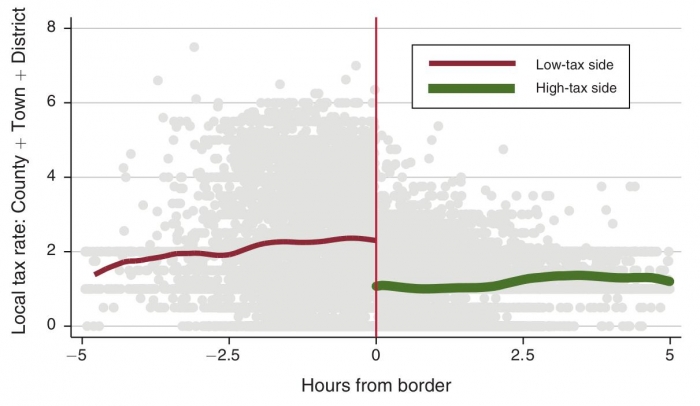 Figure 3 shows that when focusing on places with very large differences in the state tax rates, local governments substantially reduce these state tax differentials at state borders.  The level effect on local tax rates at the border is much larger and meaningfully will influence shopping patterns. 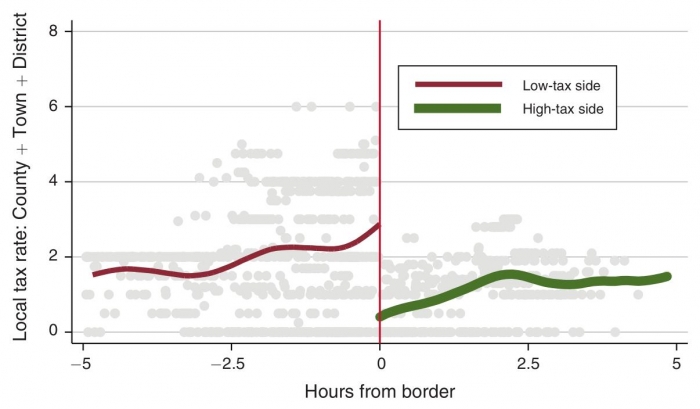 Furthermore, when comparing border towns with interior towns located in the same state, I find that border towns in low-tax states set higher taxes than interior towns in that state.  This decline is evident on the left side of each of the figures.  A ten minute increase in driving time from the nearest high-tax state lowers a town’s local tax rate by 0.14 percentage points relative to an average local tax rate of approximately 2 percent in low-tax states.

These findings may apply to other taxes, regulatory and spending policies where both states and local governments have authority.  When caring about the policies as a whole, it is misleading to simply compare state policies across states when localities also have authority over the same policy.  In the presence of local taxes, states that seem different based on state tax rates alone look much more similar after accounting for local policies.  Local governments set sales taxes in ways that appear to be rationally consistent with their objectives and in a way that may reduce large distortions at borders.

This article is based on the paper “The Tax Gradient: Spatial Aspects of Fiscal Competition” that appeared in the American Economic Journal: Economic Policy in 2015, pages 1-29.

David R. Agrawal – University of Kentucky
David R. Agrawal is an Assistant Professor in the Martin School of Public Policy & Administration and an Assistant Professor in the Department of Economics at the University of Kentucky. He received his Ph.D. in economics from the University of Michigan. His research focuses on public economics with an emphasis on taxation, fiscal federalism, and fiscal policy in urban and regional contexts.  David received the Peggy and Richard Musgrave Prize in 2011.