The growth of income and wealth inequality has led to greater political influence for the 1 percent. But what are the social policy outcomes of this increasing inequality? In new research, Thomas Hayes and Lyle Scruggs examine support for social safety nets among different income groups as well as the link between state welfare generosity and income inequality. They argue that those with greater wealth are more likely to dislike generous state welfare policies; the greater political influence that these groups now wield may be linked to sharper reductions in state welfare policies.

As knowledge about the growth of income and wealth inequality has increased, many studies have found evidence of the unequal political influence of the wealthy.  Less well researched are the social policy outputs across political jurisdictions, and positive policy feedback– i.e., inequality begetting more inequality–, as some “oligarchic theories” of American democracy suggest.

In a recent research, we examine whether the political power of increasingly concentrated wealth produces welfare state retrenchment, possibly reinforcing the growth of inequality in America. We looked at the income shares going to the wealthiest 1 percent in each state and two elements of state social policy outputs —unemployment and social assistance benefit replacement rates.  Our results support the “plutocracy hypothesis,” which suggests that as state incomes become more concentrated, state welfare policies are subject to sharper reductions.

The fact that social benefits decline in the face of growing inequality at the very top contradicts the common assertion that democracies will produce more redistribution to compensate for rising income inequality.  An important reason for this, we argue, is the lopsided influence of wealthy individuals in the democratic process. The wealthy have long been more opposed to stronger safety nets for the less-well-off. But income concentration at the top has become so skewed, and politicians so reliant on their support for re-election, that representation in America may have veered quite far from the ideal of one-person, one-vote in recent years.

How can growing inequality at the very top generate social policy retrenchment? First, not only have the wealthy long been more likely to participate in politics and exercise significant political power relative to their numbers, but they have become, increasingly likely to be active in important political activities in the United States (the .01 percent of earners account for over 40 percent of all campaign contributions in 2012 up from about 20 percent in the 1980s).  Second, the ideological leanings of the rich tend to be more anti-welfare than the middle class and poor, even when all groups are skeptical of welfare programs. Our analyses, using nationally representative surveys support such findings, most specifically related to government spending on programs meant to provide benefits to those struggling economically.

Figure 1 shows information from two national opinion polls that demonstrate that rich and poor generally disagree sharply on welfare policies. The figure shows Net Opposition by income group for spending in each area so that positive values in the figure indicate majority opposition while negative values indicate majority support. The figure shows increasing opposition to spending on each safety net program as individual incomes increase.  While welfare and government spending in general may be unpopular, they are more unpopular as household income increases. Notably, there is net support for unemployment benefits for all but the highest income group. 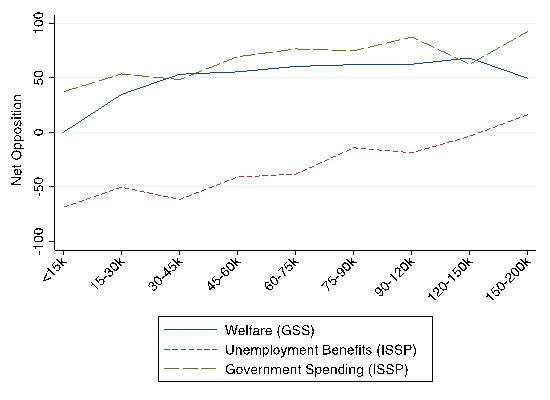 We also examine opposition to unemployment benefits using data with income categories beyond the upper range measured in most surveys. Figure 2 shows that opposition to benefit extension increased noticeably at higher incomes. Unsurprisingly, net opposition is higher among Republicans on this issue, but rises noticeably among high income Democrats. 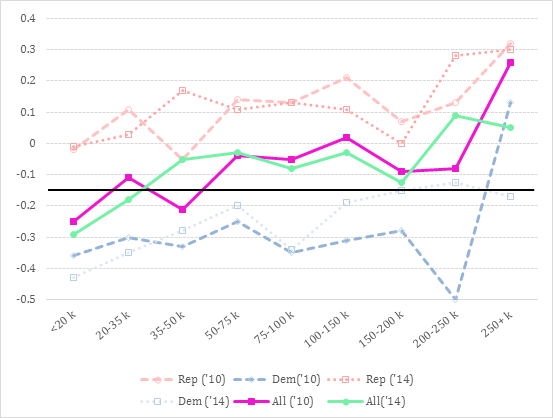 The third and final element of our argument is that not only do the interests and psychology of greater wealth appear to reduce support for social welfare programs for the middle and lower ends of the distribution, but the wealthy carry considerably more weight with elected politicians.  This is due, among other things, to dependence on individual financing to run for office, including those within one’s own party.

Our argument is that increasing income concentration mobilizes more wealthy individuals– the rich themselves– who have increasing relative power over the electoral fates of politicians and, and the ear of politicians in office.  Holding total income fixed, an increase in income concentration shifts resources away from middle class or poor voters who are (empirically) much more likely to support strong unemployment or welfare protection presumably out of both self-interest and “fellow feeling” for the plight of the poor and middle class, to individuals who tend to be less empathetic in general, have less economic interest in supporting such policies, and accrue to people (the poor and middle class) to whom they are increasingly socially disconnected. Given the existing evidence that relative poverty tends to reduce participation of the poor, rising inequality shifts the political agendas in the direction of less social protection, while reducing the participation of those most likely to vote for more social protection. After the election, growing inequality further favors the interests of those with concentrated income. The evidence suggests that this class skew exists for partisans of both major political parties, even though supporters of one party (Republicans) tends to be more anti-welfare independently of income.

To examine the relationship between welfare generosity and income concentration we employ a data set, which encompasses annual information on individual US states from 1978 to 2010.  While we use a variety of statistical techniques to examine this relationship, it is perhaps best illustrated graphically. Figure 3 shows the bivariate relationship between the level of income going to the Top 1 percent and each of our measures of state welfare benefit generosity. The results show a clear negative correlation between inequality and benefit generosity.  This negative correlation squares precisely with the prediction of the oligarchy hypothesis, but runs counter to the democracy hypothesis. 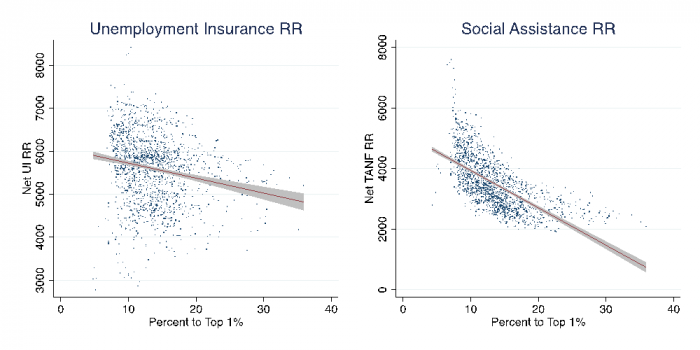 The extent to which the wealthy have unequal influence over the political system is a key concern when evaluating the degree of democracy in a given nation.  Our analysis provides some initial (albeit circumstantial) answers to why and how economic elites may exercise an oversized influence on policy.  An important implication of our findings is that as income becomes more concentrated, we should see increased misrepresentation of citizens concerns.

This article is based on the paper ‘The Influence of Inequality on Welfare Generosity’ in Politics and Society.

Lyle Scruggs – University of Connecticut
Lyle Scruggs is a professor of political science and member of the Human Rights Institute’s Research Program on Social and Economic Rights at the University of Connecticut. His recent research examines the impact of economic conditions on attitudes about climate change and the relationship between social insurance protection and health outcomes.