Discrimination by those selling or renting homes is illegal under the 1968 Fair Housing Act (known as Title VIII), but housing discrimination and segregation in the US have not been eliminated. Federal, state, and local agencies are responsible for enforcing Title VIII, so in which part of government is enforcement most effective? In new research which analyses data from the US Department of Housing and Urban Development (HUD), Charles S. Bullock III, Eric M. Wilk, and Charles M. Lamb find that state and local agencies function more effectively than HUD in enforcing Title VIII and that the level of government that handles housing discrimination claims makes a difference.

The Fair Housing Act of 1968, commonly referred to as Title VIII, is a landmark civil rights law that prohibits discrimination in the sale, rental, and financing of housing as well as in the operation of brokerage services. Nonetheless, almost five decades later housing discrimination and segregation persist in the US, signaling that all is not well in Title VIII enforcement. Improvements might involve, first, increased effectiveness with which civil rights agencies at all levels of government resolve discrimination complaints and, second, remedies for victims of discrimination. With this in mind, in new research, we explore the relative effectiveness of federal, state, and local agencies in enforcing Title VIII. We find that state and local civil rights agencies are generally more effective than the federal government in both conciliating complaints and providing remedies to persons claiming housing discrimination.

The US Department of Housing and Urban Development (HUD) is the lead federal agency in fair housing enforcement. HUD implements fair housing policy by investigating, conciliating, and closing Title VIII complaints and then providing appropriate remedies. State and local civil rights agencies that assist in Title VIII enforcement under HUD’s Fair Housing Assistance Program (FHAP) use a very similar process. If there is both a state and local FHAP agency where the alleged discrimination occurred, the complainant may initially file a complaint with either HUD or the local or state agency. If the complainant files with HUD under these circumstances, HUD sends the complaint to the local agency for processing. Complaints filed with the local agency get processed there. The state agency processes the complaints it receives. If there is no FHAP agency in the geographical area where the alleged discrimination occurred, then HUD handles the complaint.

The development of FHAP and its operation raise important questions about how the US can better enforce civil rights. It also raises a fundamental question about federalism: When federal, state, and local governments enforce the same national program, does the level of government at which the remedy is pursued result in different outcomes? Based on an analysis of a comprehensive data set obtained from HUD for the years 1989 to 2004, the answer appears to be yes.

One measure of bureaucratic effectiveness is conciliation success rate.  Failure to mediate between the parties involved in a Title VIII dispute shows that the agency has not been effective.  A second measure of bureaucratic effectiveness is the first-attempt success rate in conciliation, i.e. how often was a resolution achieved on the first try, thereby eliminating the need for multiple attempts?

Using these measures of success, the US Department of Housing and Urban Development lags significantly behind state and local agencies. HUD’s ineffectiveness in comparison to Fair Housing Assistance Program agencies is especially pronounced on the first-attempt measure: a state agency is 88 percent more likely than HUD to conciliate a complaint successfully on the first attempt, and local agencies are 73 percent more likely than HUD to succeed.

A third measure of bureaucratic effectiveness is the extent to which federal, state, and local civil rights agencies provide remedies to victims of housing discrimination. On this dimension HUD appears to be more effective than FHAP agencies in monetary relief awarded—but only for successful conciliations. When remedies in both successful and unsuccessful conciliation attempts are considered, HUD’s advantage in providing a remedy to victims disappears. 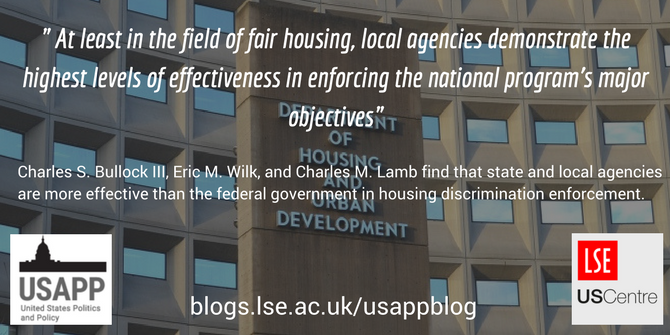 Our research indicates that state and local agencies function more effectively than HUD in enforcing Title VIII and that the level of government that handles a housing discrimination claim does make a difference. The requirement that states and localities pass and enforce discrimination laws substantially equivalent to Title VIII in order to participate in FHAP helps explain these findings. State and local governments willing to undergo the process of achieving and retaining substantial equivalency may be more enthusiastic than HUD about carrying out their functions effectively and better equipped to process complaints given their geographical proximity to individual cases of discrimination.

Incentives for enforcement by state and local agencies are needed

These findings have several implications that build on each other. First, differences in outcomes in a federal system become apparent when each level of government is given responsibility for enforcing fair housing law. This leads to the second implication. At least in the field of fair housing, local agencies demonstrate the highest levels of effectiveness in enforcing the national program’s major objectives.

Given this second implication, then, the third is that Congress should consider creating incentives to encourage more state and local agencies to enforce Title VIII.   Hundreds of additional metropolitan areas and counties could pass housing discrimination laws—often their first ever—and develop effective local agencies.

The final implication of our research is that the success of state and local fair housing program implementation suggests that delegating enforcement of other federal programs could also result in greater effectiveness in reaching program goals. After all, if enforcement of this contentious civil rights program improves through local and state agencies, achievement of less controversial policy goals will likely be facilitated if given to states or municipalities. Delegating to state and local agencies would be especially attractive if it resulted in cost savings, which the U.S. Commission on Civil Rights has shown occurs with state and local agencies fair housing enforcement.

Charles S. Bullock III – University of Georgia
Charles S. Bullock, III, is the Richard B. Russell professor of political science and Josiah Meigs distinguished teaching professor at the University of Georgia. He is the author, coauthor, editor, or coeditor of more than 30 books and more than 250 articles. Among his books are Redistricting: The Most Political Activity in America, Georgia’s Three Governors Controversy and The Rise and Fall of the Voting Rights Act. He is the past president of the Georgia and Southern Political Science Associations. He has consulted extensively on redistricting and is a frequent source for domestic and foreign journalists.

Eric M. Wilk – Perimeter College of Georgia State University
Eric M. Wilk currently teaches at Perimeter College at Georgia State University. He has spent the last several years teaching at Georgia Gwinnett College. He has extensive experience serving a variety of clients and audiences with marketing, academic, and political research. His most recent research analyzes how factors such as race, ethnicity, location, and level of government processing agency have impacted the outcomes of the discrimination complaints. Congress, elections, southern politics, and federalism represent the areas of particular interest. He also has significant background in political, corporate, and educational consulting.

Charles M. Lamb – University at Buffalo, SUNY
Charles M. Lamb is a professor of political science at the University at Buffalo, SUNY. Before going to Buffalo he was a research scientist at George Washington University and a fair housing specialist at the U.S. Commission on Civil Rights in Washington, DC. He is the author of Housing Segregation in Suburban America since 1960: Presidential and Judicial Politics. He has also published in professional journals and coedited four books: Supreme Court Activism and Restraint, Implementation of Civil Rights Policy, Judicial Conflict and Consensus: Behavioral Studies of American Appellate Courts, and The Burger Court: Political and Judicial Profiles.