If the quality of democracy is to be measured by the extent to which it constrains the economically dominant, then American democracy is failing, writes George Tyler. Recent research has shown how campaign financing is skewing policy influence towards top earners. This is in contrast to many northern European countries, which can offer practical models for the US to follow.

Aristotle measured the quality of democracy by the extent to which politics constrains the economically powerful, allowing the preferences of the landless to be reflected in public policy. According to a new analysis, American democracy gets a failing grade on Aristotle’s test while the countries of northern Europe are star pupils.

Path-breaking recent research has established a causal relationship between preferences of elite earners and public policy outcomes: the income bias. Aristotle’s maxim in the context of the US is the precise hypothesis that Benjamin Page at Northwestern and Martin Gilens of Princeton tested in research. Some 1,779 contentious Congressional votes over two decades were matched with contemporaneous US public opinion surveys. The survey data were parsed by respondent incomes into low (tenth percentile of family income), fiftieth percentile and ninetieth percentile silos.

Gilens and Page documented affluence dominance, finding a “total failure” of middle income voters to influence Congressional policy outcomes. For instance, as the share of top earners favoring a particular policy rises from 10 percent to 90 percent, the odds of that outcome occurring increases by 45 percentage points. In contrast, as the share of supportive middle income earners rises from 10 percent to 90 percent, its odds of enactment improve by less than 4 percentage points.

The melding of political and economic influence documented by Gilens and Page has placed America on the pathway described by Oxford’s Stein Ringen: “In Athens, democracy disintegrated when the rich grew super-rich, refused to play by the rules and undermined the established system of government. “

Pay-to-play is the pathology at the center of America’s low quality democracy. In pursuit of campaign contributions, the Republican Party in particular has succumbed to the income divergence agenda of the nation’s conservative political donor class – low, regressive taxes, wage suppression and fewer public goods. Hobbled by that party’s opposition, the Obama administration made little effort to restore real wage growth, reverse eroding social mobility and the like – and frustrated non-college white voters in America’s Rust Belt repaid the Democratic Party in kind in 2016.

Donor class support of their Republican acolytes was more responsible than the Russians for the 2016 election pathologies that delegitimized US democracy. Nine-digit spending by the Koch brothers was channeled into mendacious personal attacks on opponents and baseless attacks on mainstream factual reporting. The billionaire Mercer family is singlehandedly responsible for the emergence of the incendiary Breitbart website. And both Rupert Murdoch’s Fox News and the mammoth far-right Sinclair conglomerate of 173 television stations lavished billions of dollars worth of fables lauding Republicans and demonizing opponents.

The outcome is the most polarized American electorate in five generations since the Civil War. More believe the mainstream press is their enemy than trust it. Surveys by Transparency International find that Americans now have less confidence than Europeans in legislative and judicial institutions. Worse, fewer than half of Americans believe it’s “absolutely important to live in a democracy;” the share rejecting democracy is more than double the share in Northern Europe. And one-third of Americans have come of late to support “a strong leader who doesn’t bother with Congress or elections.” 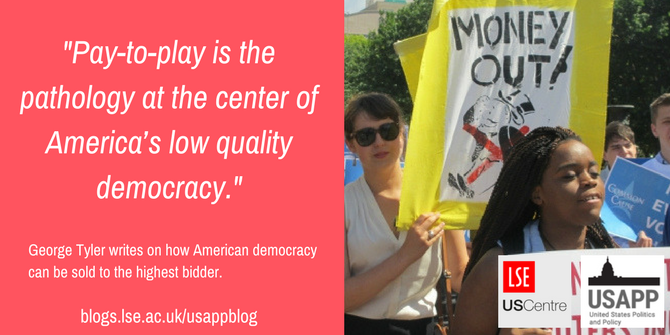 “Activists rally at the White House, demanding democracy reforms.” by Public Citizen is licensed under CC BY NC SA 2.0

Now look at the situation in northern Europe. Economic mobility is higher, education including college cheaper, vacations longer, health care less expensive and job security greater. There, the preferences of average households are heard and heeded by public officials. Thanks to co-determination and collective bargaining, for instance, wages measured in purchase power terms in the capstone manufacturing sectors of thirteen European nations are more than $10 an hour higher than American wages according to the US Bureau of Labor Statistics. And real wages in Germany during 2014–16 alone rose as much as real wages for most Americans have in the entire span since 1979. Evidence is also found in data on government redistributive efforts. Changes in the Gini Coefficient measure of income dispersion as a consequence of government tax and spending policies reflects the intensity of efforts to expand prosperity. The diminution of market-income inequality achieved by public policies is nearly twice as great in Belgium, France and Germany, for instance, than in the US. That is unsurprising since American federal tax and spending policies redistribute $1.35 to the highest quintile of earners for every $1 to the lowest quintile. Little wonder then that America’s income disparity after government taxes and transfers resembles that of Turkey.

Finally, the electoral failures of Geert Wilders, Marine Le Pen and the German AfD party document that Trumpian tribalism and racism has less appeal in northern Europe than in America. The explanation is multifaceted, including European electoral rules that minimize negative political ads while providing voters accurate policy and candidate information. It also includes the not-distant memories on the continent of fascism. And it includes the more assertive response by Western Europeans to the poisonous threat posed by über-partisan and inaccurate social media posts. But most importantly, the high quality of western and northern European electoral systems reflects success in largely excluding private money from politics. That success is why Gallup finds that Germany (41 percent approval) is today’s top-rated global power, with the US (29%) bunched with the other faux democracies of China (30%) and Russia (27%).

Rebuilding the quality of American democracy may take a generation because it begins with ending pay-to-play, dependent on recentering the Supreme Court by Democratic presidents and senators. The interim should be devoted to energizing voter participation with public funding of elections, open primaries, promoting proportional representation, automatic voter registration, election-day registration and other reforms.

The high quality democracies of northern Europe confront formidable challenges detoxifying social media and confronting avaricious authoritarians in Poland, Hungary, Russian, China and the like. Even so, they provide seasoned, practical models for the reformation of America’s ersatz democracy. History is rich with ironies, but few as significant as northern Europe displacing an oligarchic America as the indispensable nations, spreading democracy abroad while exhibiting its success at home in spreading prosperity widely.

George Tyler
George Tyler began his career working in the United States Congress as an economic adviser to Senators Hubert H. Humphrey of Minnesota and Lloyd M. Bentsen of Texas and as Senior Economist on the Congressional Joint Economic Committee. Appointed by President Clinton as a Deputy Treasury Assistant Secretary in 1993, George worked closely with international financial institutions and in 1995 became a senior official at the World Bank. George is the author of What Went Wrong: How the 1% Hijacked the American Middle Class… And What Other Nations Got Right.