Now nearly three weeks old, and with all sides refusing to move from their positions, the US government shutdown shows little sign of coming to an end. Michele Swers writes that while in previous shutdowns both Republicans and Democrats in Congress have made concessions when public opinion has turned against them, President Trump’s refusal to back down on the US-Mexico border wall makes this far less likely. If Trump continues to hold his ground, she argues, then the outcome will hinge on House and Senate Republicans’ loyalty to a president who is expanding executive power.

The partial US government shutdown is entering its 20th day and is on track to surpass the longest shutdown, a 21-day standoff between Democratic President Bill Clinton and the Republican controlled Congress in 1995/1996.  Why does the current crisis seem so impenetrable and what signs should we look to for how it might end?

Who Does the Public Blame?

In past shutdowns, pressure to compromise increases as more government services are disrupted and media coverage intensifies of the plight of furloughed federal workers, the suffering of citizens denied vital services, and the spectacle of shuttered national parks filling with trash.   As a result, politicians pay close attention to who the public blames for this mess.  This is why President Trump utilized his bully pulpit in a televised address and a planned visit to the border to blame Democrats for not taking border security seriously.  In return, in their response Democratic leaders Nancy Pelosi and Chuck Schumer portray President Trump as throwing a tantrum and stress their desire to open the government. In the most recent shutdown, when Democrats refused to negotiate on spending bills without a deal to protect Dreamers, Democrats realized they did not have enough leverage to force the Congressional Republicans and President Trump to compromise on immigration. They quickly capitulated to avoid shouldering the blame for a long shutdown.  Similarly, in the 1995/1996 shutdown when Newt Gingrich and Republicans realized that rather than forcing President Clinton to accept deeper spending cuts, they were elevating his public standing as protector of government services, they came to the negotiating table.  Currently, polling shows that President Trump receives more blame than Democrats for the impasse, but public anger with all sides will increase as the shutdown drags on.

What are the Political Incentives of the Players?

Even if President Trump is currently shouldering more of the blame, it is not clear that the general public is the audience commanding his attention.  President Trump is preparing for re-election in 2020 and the border wall was his signature campaign promise.  While his national public approval rating remains mired in the low 40s, he is much more popular with Republican voters.  The Republican base and the conservative media that amplifies their message want to see the President fight for his border wall and keep his promise.

To date, Republican Senate Majority Leader Mitch McConnell has been quiet maintaining he will not put a bill before the Senate that President Trump will not sign.  McConnell is also up for re-election in 2020 and does not want to risk angering Trump voters and drawing a primary challenger.  Moreover, McConnell now leads a majority that is larger and more loyal to the President.  Moderate Democrats who lost in 2018 were replaced by conservative Republicans and outspoken Republican Trump critics Bob Corker and Jeff Flake retired.  In the House, Republicans lost their majority but those who remain are more conservative.  It was the more moderate members in suburban districts that fell to the Democratic midterm wave.   Meanwhile, newly energized Democrats expect Speaker Pelosi to steer progressive legislation through the House and are enraged by the idea of a border wall.  The Senate is filled with Democratic presidential hopefuls willing to hold the line against a border wall. 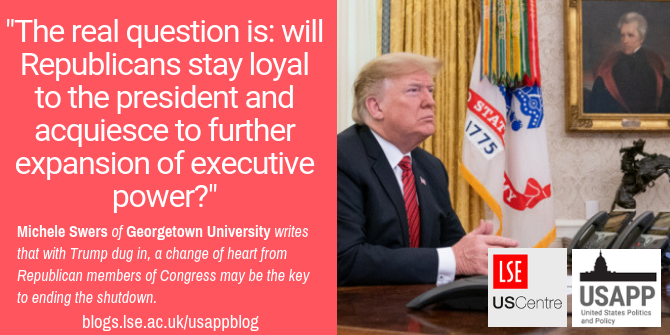 “President Donald J. Trump participates in a Christmas Day video teleconference from the Oval Office” by The White House is Public domain.

The Wild Card: How Do the Players Wield Their Institutional Powers?

It is clear that Washington is in a hyper partisan and polarized state.  Research on divided government shows that things are particularly difficult when the House and Senate are controlled by different parties because the two houses of Congress must agree on a solution before negotiating with the president.  In recent years hyperpartisanship has led Congress to wield its procedural prerogatives like weapons and the president responds by relying more on executive power.  Republicans and Democrats have ramped up their use of the filibuster to thwart majority rule in the Senate. In the House, Speaker John Boehner spurred by the demands of Tea Party Republicans used the debt ceiling and government shutdowns to press President Obama to accept budget cuts and to try to force repeal of his signature health care law in 2013.

In the current shutdown, Democrats are using standard tactics. In the House they are passing Appropriations bills to re-open shuttered agencies in the hopes of flipping Republican votes.  In the Senate, they are blocking legislative action until the majority brings bills to re-open the government to the floor.  Democrats hope they can peel off enough Republican votes to show they are close to being able to override a presidential veto and force the President to the table.  The wild card is President Trump. Even when Republicans controlled both houses of Congress, President Trump preferred executive action (executive orders, changes to the regulatory process, re-negotiating or pulling out of international agreements) to negotiating legislation.

Now that Democrats control the House, he is threatening to declare a state of emergency and work through the Pentagon to divert existing money for defense projects to a border wall.  If that happens, Democrats in Congress will go to the courts claiming the President is infringing on Congress’s power of the purse and overstepping his authority. The real question is: will Republicans stay loyal to the president and acquiesce to further expansion of executive power that could be used against them the next time a Democrat is in the White House?  Alternatively, will conservative objections about federal government overreach or concerns from defense hawks who don’t want to see money siphoned from the defense budget override the political pressures of the day requiring a return to the negotiating table?

Michele Swers – Georgetown University
Michele Swers is a Professor of American Government in the Department of Government at Georgetown University. Her research interests encompass Congress, Congressional elections, and Women and Politics. Her most recent book, Women in the Club: Gender and Policy Making in the Senate (University of Chicago Press 2013) examines the impact of gender on senators’ policy activities in the areas of women’s issues, national security, and judicial nominations.