As both campaign and as presidential rhetoric, Donald Trump has boasted of his deal making prowess. However, like for all other presidents before him, the deals that Donald Trump makes internationally will be informed by US domestic politics – especially in the lead-up to a presidential election. Looking to the past, Andrew Payne writes that while previous administrations have often tried to pursue foreign policy in such a way as to minimize any domestic political impacts, presidential campaigns have often limited the incumbent’s room for manoeuvre because of the fixed date of an election, and the threat of policy changes that are presented by challengers to the incumbent. The 2020 election will likely present Donald Trump with similar constraints as he attempts to come to agreements with China, Afghanistan, and North Korea.

“Deals are my art form. Other people paint beautifully on canvas or write wonderful poetry. I like making deals, preferably big deals.”

[Donald Trump, The Art of the Deal]

If history is any guide, there is reason to hope that President Trump belatedly takes up painting this campaign season. Over the next 18 months or so, as always seems to be the case in American politics, the looming presence of a presidential election will throw up a whole host of impediments to the pursuit of optimal diplomatic agreements abroad, including with China, Afghanistan and North Korea. A brief look back at critical negotiations during the wars in Vietnam and Iraq suggests a crucial lesson: electoral politics and diplomacy do not mix well.

Domestic politics is known to shape presidential decision-making on foreign policy (a so-called two-level game). What makes the problem so acute in an electoral context is the officeholding incentive inherent in a democratic system like that of the United States. Presidents depend on voters for political survival, and since most tend to prize re-election, they are incentivised by the nature of the office to consider any policy proposal that reaches the Oval Office with one eye on the electoral consequences at risk. No policy domain is exempt from this, including high-level diplomacy.

Back in April 1971, for instance, Richard Nixon was clear about his priorities when it came to the pursuit of peace in Vietnam. “Everything has to be played in terms of how we survive,” he explained to his National Security Advisor, later adding, “if we could survive past the election, Henry, and then Vietnam goes down the tubes, it really doesn’t make any difference.” Indeed, the terms of the deal he had Kissinger negotiate over the following eighteen months would leave thousands of North Vietnamese guerrillas in the South, waiting to overrun the country after a “decent interval” had elapsed following the withdrawal of US forces.

Nixon reacted again with concern only for his own future when, at the eleventh hour, the President of South Vietnam, Nguyen Van Thieu, threatened to scupper the talks. Despite being advised that “our terms will eventually destroy him,” Nixon’s sympathy for such a key ally came second to his concern about the political impact of any resulting breakdown in talks on the eve of the 1972 presidential election. “The more we can stagger past the election the better,” he concluded, “I don’t want it before the election with a Thieu blowup, it’s going to hurt us very badly.” The Paris Peace Accords were signed shortly after Nixon’s second inauguration, with Saigon’s future having been sacrificed by the President at the altar of electoral expediency.

Reason #2: Opponents read the newspapers, too

Even if the president can rise above the fray of partisan politics, the challenges posed by election season are compounded by the presence of other actors with competing preferences. At home, presidential challengers carry all the same officeholding incentives of the incumbent without any of the international responsibilities that come with being the nation’s Diplomat-in-Chief. As such, high-profile negotiations involving the United States represent opportunities for other candidates to differentiate themselves from one another and the current administration, with bold, imaginative, and sometimes downright unworkable alternative proposals.

While these may be effective in garnering votes, they may also serve to weaken the incumbent administration’s room for manoeuvre in ongoing talks. Already uncertain as to how credible any commitments made by a here-today, gone-tomorrow president may be in an election season, an opponent is incentivised to monitor the alternative positions put forward by front-runners in the presidential race and alter their bargaining position accordingly.

Lyndon Johnson found this to be true even when his name was not on the ballot paper in 1968. Having withdrawn from the presidential race to focus on the pursuit of peace in Southeast Asia, LBJ was aghast when the Democratic nominee, Hubert Humphrey, publicly broke with his proposed ceasefire terms. Johnson understood that unless he also weakened his terms, Hanoi now had every incentive to stall the talks. “If Humphrey’s elected, they’re in clover,” Johnson explained in a phone call to his Secretary of State. “If he’s not elected, then they can look and see what they want to do between me and Nixon. So you can just forget everything until then.” 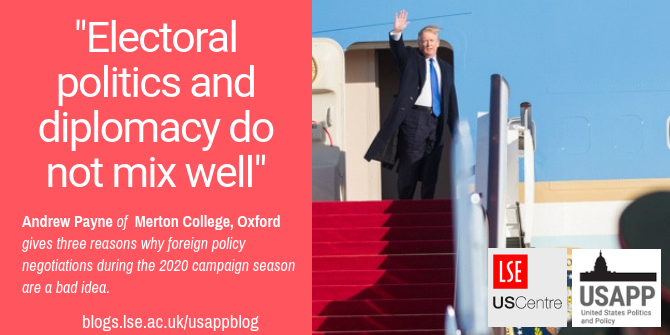 When Hanoi did finally come to the table, however, Johnson’s leverage was hindered further thanks to the efforts of the Republican nominee. Hoping to convince Saigon that its interests would be served best by waiting for a more hawkish administration to take office, Richard Nixon sought to sabotage the peace talks via back-channel communications, ordering that a “monkey wrench” be thrown into the process.

Even if the sitting president still offers the best terms available, a wise opponent may drag out negotiations, conscious that domestic pressures and an immovable deadline in the shape of Election Day may push the incumbent to offer successive concessions as that time limit approaches.

During the 2008 election cycle, George W. Bush faced this challenge while trying to negotiate a Status of Forces Agreement with Iraq during the twilight of his presidency. Intended as a basis for locking in the perceived gains of his “surge” strategy beyond the lifetime of his administration, the talks became bogged down over the question of legal jurisdictions over American troops. “It became pretty obvious that this wasn’t going to go anywhere, and it was not going to produce on the timeline that we had, which was the November election,” admits Doug Lute, Bush’s “war czar” on the National Security Council staff, who assumed oversight of the negotiations. A compromise was swiftly negotiated giving the Iraqis jurisdiction, at least on paper.

As Election Day 2008 drew closer, the pressure for a deal intensified, compelling Bush to make a further series of critical concessions to the Iraqis. Crucially, having previously considered the notion of a fixed drawdown schedule to be an anathema, he allowed a clause to be baked into the agreement compelling all US forces to withdraw by the end of 2011. “That was a signal that we need this agreement,” confirms Lute, adding that “here is a case where he really did have a strategic horizon that was timeline-based. He knew what the milestones were in the calendar, and he drove us.” In so doing, the entire character of the agreement had changed. It was now in essence a withdrawal agreement, ironically so unobjectionable to Barack Obama that he refrained from criticising a deal which had been borne of a desire to tie his hands.

With primary season around the corner, a couple of issues are now particularly vulnerable to the spoiling effect that electoral politics can have on negotiations.

Most obvious, perhaps, is North Korea, where President Trump’s initial claims to have “solved” the problem of nuclear proliferation on the Korean peninsula have since been shown to be exaggerated at best. Amid stalling talks, leading Democratic candidate Joe Biden and Pyongyang are already engaged in a war of words. After appearing to signal a harder line policy towards North Korea than that of Trump, the Vice President was branded a “fool of low IQ” whose hopes for victory in 2020 are “enough to make a cat laugh” by the official North Korean news agency.

The achingly slow progress of talks with the Taliban involving a possible full US withdrawal from Afghanistan may yet be influenced by electoral considerations, too. Given the Democratic field’s broad support for a policy of restraint in the Middle East, as well as Trump’s pledge to extricate the US from the “forever wars,” it would be no surprise to see further American concessions to remove a possibly thorny campaign issue for the President at the expense of Afghan allies.

Finally, we may yet see an electoral impact on the ongoing “trade war” with China. While the public tend to know little and care less about foreign policy except in cases where the commitment of military forces are in question, President Trump has been notably effective in raising voters’ consciousness of trade policy. As Democrats begin to formulate their own positions on the issue, Trump has already claimed that Beijing is stalling talks in the hope of negotiating favourable terms with one of the president’s challengers in the 2020 race.

Even if Trump is as accomplished a negotiator as he questionably claims, an election season in the United States places profound constraints on any president’s ability to succeed at the bargaining table. With a cocktail of political pressures and competing incentives about to be unleashed as we look ahead to the primaries, there is much cause for concern.

Andrew Payne – Merton College, Oxford
Andrew Payne is a DPhil Candidate in International Relations at the University of Oxford. His current research examines the impact of electoral politics on American decision-making in the wars in Korea, Vietnam and Iraq. He is the author of a forthcoming article in International Security exploring the role played by electoral constraints in decision-making during the Iraq War.