Criminal justice “reforms” that expand parole rely on prisoners’ families and communities to pick up responsibility for their care and supervision.

Criminal justice “reforms” that expand parole rely on prisoners’ families and communities to pick up responsibility for their care and supervision.

The last decade has seen a levelling off of prison populations in the United States. Vanessa A. Massaro writes that the reforms which have led to this trend have actually displaced the burden of incarceration from prisons onto families and communities. Through her ethnographic research in Philadelphia, she finds that care for incarcerated people imposes significant financial and emotional costs on their families as residents often cycle in and out of the prison system.

After 40 years of rapid expansion, prison populations in the United States began leveling off in 2008. This slight decrease in the still high prison populations at the state and federal level are the result of myriad bi-partisan reforms to shorten sentences, reduce racial disparities in the system, and divert drug offenders from incarceration. In practice, these reforms may not address these issues; rather, they are geographically displacing the burden of imprisoning people. Instead of these services being delivered by the state, families are now tasked with clothing, sheltering and caring for people convicted of crimes as they are paroled into their homes.

The State of Pennsylvania serves as a prime example of these national trends in imprisonment reform. Pennsylvania is only 12 percent Black, yet its overcrowded state prison system is 45 percent Black. Republican Governor Corbett signed the bi-partisan Justice Reinvestment Reform Initiative bill into law in 2011. Since taking effect in 2012, Pennsylvania has reduced the state prison population by over 1000. But in this same period the number of people on parole has increased by over 5000. The state has experienced a net increase of people under correctional supervision. Criminal justice reforms are “net wideners” that sweep more people into the justice system overall. This increase in total people supervised signals the need for closer attention to the often unseen consequences of criminal justice reform.

These underlying consequences are not experienced evenly across society. Racial disparities in criminal justice combine with residential segregation to create neighborhoods disproportionately burdened by mass incarceration and the expansion of parole. Philadelphia is one of the most segregated cities in the US, and Black neighborhoods experience higher rates of incarceration than their white counterparts. Black neighborhoods are thus also disproportionately impacted by reform measures. If reforms seek to address racial disparity and reduce recidivism, then the experiences of these communities is an essential, yet missing, piece of the reform puzzle.

My research examines the toll these reforms are taking on families of incarcerated people. I have lived and worked in one primarily Black neighborhood for nearly ten years: Grays Ferry, Philadelphia. I found day to day life in Grays Ferry is shaped, in part, by the high numbers of residents who cycle in and out of the prison system, and who fear arrest. It saves tax dollars to supervise people through parole and families see it as preferable, but the costs and emotional burdens are ultimately shouldered by loved ones. My ethnographic research on the experiences of families and communities of incarcerated loved ones demonstrates the need to take the broader reverberations of incarceration into consideration in any policy initiative.

It was just a sit and wait thing and then I worked all the time so, it just kept me busy and it kept my mind off [my husband being locked up] so when I come home I’m so fricking tired, I don’t even have time to cry…but my son had gotten real close to him so by him being locked up, my son really had nobody that he can really talk to…it was like my son was abandoned. (Author’s interview transcripts)

Extreme financial burden compounds the emotional toll. Between 2015 and 2017 we conducted interviews, focus groups, and surveyed approximately 300 randomly selected households in neighborhoods with a high proportion of minority residents across Philadelphia. Many spend hundreds of dollars monthly supporting loved ones who are incarcerated:

I would say if you’re putting money on their [commissary account] and visiting, that alone would be…probably a month $300…it’s a lot.

Responses demonstrate that care for incarcerated people represents a considerable financial cost to the people we spoke with. In a neighborhood where 35 percent of the households live on less than $2,000 a month, the hundreds of dollars people report spending represents a significant burden. Residents reported spending large sums to aid loved ones during arrest, incarceration and parole. 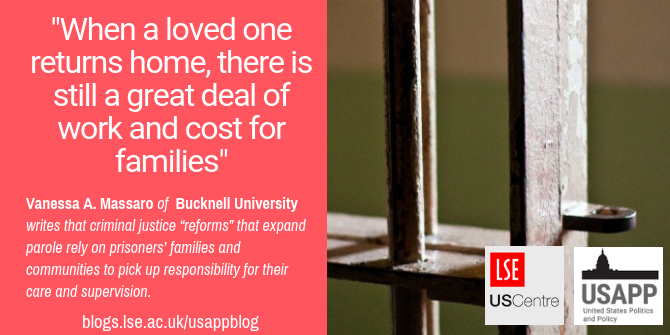 When a loved one returns home, there is still a great deal of work and cost for families. Families help them with supervision fees upon release from prison, aiding in job searches, and providing ongoing emotional support during the reentry process. If the goal is to reduce the number of people in prison and not to simply widen the net of correctional supervision, then the broader support network that keeps people from recidivating must be taken into account.

There is a disconnect between these narratives and the guidelines for families and parolees provided by the Pennsylvania Board of Probation and Parole (PABPP). These documents demonstrate the role families play in each step of the parole process. Take for example this chart of the parole process, families are tasked with providing a safe and secure home via the “home plan,” an integral part of the process. PABPP relies heavily on families for smooth and successful reentry of parolees, but offers little programming or resources to directly support them. Correctional and parole offices cut costs by relying upon the unpaid work of prisoner’s families (mainly Black women) and communities to provide myriad services for the incarcerated and paroled. As criminal justice reforms sweep the United States, there must be more consideration of the experiences of communities like Grays Ferry. The impact on families need be considered and supported in policy. Supervision fees, parole and probation requirements, and incarceration have wider impacts than simply the accused person.

More research on the experiences of families and households of incarcerated people is an important start to understanding the unrecognized work they do in the parole process. Investment in community based treatment and services, education, etc. reduces recidivism and frees additional public resources to invest in our communities. But a closer look at the expansion of parole in Pennsylvania cautions against a narrow goal of reducing the prison population. We must also reduce the number of supervised people to avoid creating a new geography of incarceration that circumvents meaningful change to the US justice system. Attention to the lived experiences of people in Grays Ferry and other over-imprisoned communities is necessary to explore pathways for reforms that are about more than shifting people from built prisons to parole. Justice reform reinvestments must reduce the number of people caught in the system and deliver meaningful social services not only to those who commit crimes or suffer from drug addiction, but also their broader support network of families and local communities.

Vanessa A. Massaro – Bucknell University
Dr. Vanessa A. Massaro is an assistant professor at Bucknell University. She is currently an American Association of University Women American Fellow. Her research focuses on the community impacts of mass imprisonment across Pennsylvania. She uses mixed qualitative field-based methods and GIS to understand the financial and emotional impacts for communities embroiled in this geography.