In There Is No More Haiti: Between Life and Death in Port-au-Prince, Greg Beckett offers a richly detailed, decade-long ethnography of Haiti that digs into how it feels to endure ‘forever crisis’. This deep and thoughtful study shows a sensitivity to the affect of ongoing disaster and the relationship between crisis and ordinariness, contributing to both the literature on Haitian politics and critical development studies more broadly, writes Lachlan Summers.

There Is No More Haiti: Between Life and Death in Port-au-Prince. Greg Beckett. University of California Press. 2019. 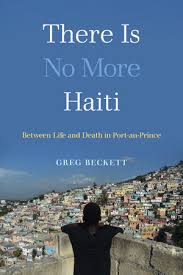 Michel-Rolph Trouillot famously wrote that the epistemological foundations of Western liberalism rendered the Haitian Revolution (1791-1804) ‘unthinkable’: Enlightenment thinking, with its specific sense of the ‘subject’, of ‘property’ and of ‘liberty’, made impossible the idea that enslaved people could proclaim their own freedom. Greg Beckett’s richly detailed, decade-long ethnography of Haiti similarly traces the way in which Haiti exceeds political categories, but here the focus is not on the thinkability of Haitian politics, but the inevitability of Haitian crisis.

Beckett’s focus on the permanence of crisis is risky: Haiti was labelled, infamously, a ‘shithole country’ by Donald Trump, and is commonly noted as the ‘failed state that keeps failing’. But Beckett reorders this dominant narrative, showing that the lazy characterisation of Haiti as essentially ungovernable, as always warranting intervention, is in fact one of the motors of its compounding crises. So, rather than explaining away crisis, identifying agency where it didn’t seem to exist, the book digs into how it feels to endure ‘forever crisis’ (106). As disasters proliferate, they begin to feel like an ever-present possibility, and the more possible such shocks become, the less they surprise. Beckett’s book both explores how disasters endure and foregrounds his interlocutors’ affective responses to their permanence.

There is No More Haiti is composed of five long chapters that are bookended by two smaller meditations on Haiti’s position in the geopolitical imagination. The first two chapters focus on slower violence, and the final three describe more explosive and immediate forms of crisis. Chapter One concentrates on debates over an urban garden. The garden was proposed as a site for a revitalisation of Port-au-Prince food production, but, over time, the difficulties in ensuring this sees the space become a flashpoint for debates over the possibility of democracy in Haiti. The second chapter looks at the work men undertake, and the moral sensibility this engenders, as they move to Port-au-Prince to make a living in its informal economy. Here, ‘the relation between work and money, activity and value, [is] not always clear’ (84) – buying a banana fritter can, for example, be a means of demonstrating commitment to a shared future, rather than just being about the food itself (83). However, the more transactional exchanges of foreign aid workers and missionaries, who don’t expect to spend their future in Haiti, can create friction between locals, disrupting these networks of solidarity (97).

The third chapter, which documents in an epistolary form the lead-up to Haiti’s Bicentennial of Independence, shows the way in which disorder and misinformation ensured that Haitians were ‘waiting for [a] coup’ (110). Haitians knew the coup was coming, Beckett argues, because the Revolution, the François Duvalier dictatorship (1971-86) and the US occupation of Haiti (1914-34) all lay scripts that would inform the coup against President Jean-Bertrand Aristide in 2004. The fourth chapter explores the violence after 2004’s coup, during the years of international military intervention and provisional governance. The chapter shows that these interventions amplified disorder, as tensions escalated between the national police, rebels, provisional governments, international forces, gangs and citizens. On the one hand, this sees increased policing, in which places like Chapter One’s garden become UN-denoted Red Zones, where police and military shoot on sight; on the other, international aid workers becoming involved with gangs and human trafficking. The fifth chapter looks to how natural disasters, principally but not exclusively the 2010 earthquake, amplify existing crises by both falling most heavily on the structurally subordinated and inviting further international intervention.

Beckett’s sensitivity to the continuity and repetition of disaster takes to task the idea that Haiti is inherently ungovernable. Firstly, he shows compounding crises: the interruption of solidarity networks (94); the production of conditions conducive to gang violence (190); UN soldiers’ participation in the René Préval provisional government’s violence (172-78); aid workers’ involvement in drug and sex trafficking (187); and UN soldiers inadvertently introducing cholera to Haiti after the earthquake in 2010 (232). Secondly, he notes repetition: a coup ousts Aristide, the country’s first democratically elected President, on the bicentennial celebration of the Revolution, in a manner that parallels the kidnapping of Toussaint Louverture during the Revolution (113); Titanyen, the mass grave used to dispose of the bodies of the disappeared during the Duvalier dictatorship, was used by the UN to dispose of the thousands of unidentified bodies after the  earthquake; and the UN-directed post-earthquake economic programme featured numerous similarities with the economics of the Duvalier dictatorship (233). ‘Repetition reveals a structure’, Beckett argues (150): crisis and disorder spiral in tandem, amplifying one another, and new crises follow old scripts.

Beckett’s writing sensitively deploys several rhetorical strategies that support his book’s analytic interventions. Firstly, Beckett’s imagery is at times lyrical, but his side details don’t just emplace the narrative; they propel it along. Passages that draw upon interviews might make note of extraneous facts, such as the smell of burning tyres or an aid worker jogging in circles around a hotel courtyard. These details position disaster as both background and foreground, showing how crisis and crisis response embed themselves in the everyday.

Secondly, Beckett positions his interlocutors as theorists, rather than informants. He regularly returns to key phrases – ‘There is no more Haiti’; ‘chen manje chen [it’s dog-eat-dog]’ – from multiple angles, examining the range of moments such statements cover. Moreover, his interlocutors theorise certain idioms: chache lavi [looking for life], or the work and moral sensibility required to make it in Port-au-Prince’s informal economy (70-76); ensekirite [insecurity], or the feeling of political, criminal and structural violence converging (156-57); and blakawout [blackout], which connects rolling losses of electrical power to Haiti’s loss of sovereignty and an individual’s lack of agency (168-70). This writing shows his interlocutors’ affective responses to their incapacity to avoid embroilment in further crises, and offers a Haitian sense of crisis, rather than a sense of Haitian crisis.

There is No More Haiti, the title of the book, is a quote from one of Beckett’s interlocutors, now deceased, and meditations upon the statement bookend the piece. However, the book ends by interpreting ‘There is no more Haiti’ as a somewhat liberal expression of hope: the expectation of eventual transcendence. For me, this short final chapter sits uncomfortably with the early chapters’ sense of ‘forever crisis’ – that disaster might not be the opposite of ordinary – and warranted greater explication. This aside, Beckett’s deep and thoughtful ethnography effectively demonstrates that disorder is not the absence of order, but is a structured confluence of scripts and externalities that are profoundly felt by people in Haiti. Though she is not cited, the book sits alongside works from affect studies, like Laura Berlant’s Cruel Optimism, for its focus on an unrelentingly immediate present that forecloses futures. This sensitivity to the affect of ongoing disaster contributes to the literature on Haitian politics. Beckett’s thinking on crisis and ordinariness could also be helpful in critical development studies more broadly – especially in situations of enduring crises, such as refugee status. And, particularly considering the widespread inaction toward the climate disaster, Beckett’s interlocutors offer helpful counsel for thinking through the banal catastrophes and forever crises of the future.

Lachlan Summers – University of California, Santa Cruz
Lachlan Summers is a PhD student in anthropology at the University of California, Santa Cruz, where he researches earthquake politics, trauma and chance in Mexico City. He has previously researched the securitisation of Australian foreign aid in the Pacific and the social production of space in Brisbane, Australia. He is a contributing editor for Cultural Anthropology.