How public pressure and community coalitions can reinvigorate public transport

How public pressure and community coalitions can reinvigorate public transport

The economic downturn of the late 2000s led many municipalities to retrench public transit services, often in poorer areas. Richard Duckworth and Alex Karner take an in-depth look at Clayton County, Georgia, where a decade after the cancellation of an important bus service, the efforts of non-profits, community leaders and transit users have led to new public transit services which now have vastly increased ridership.

One of the notable demographic trends in the United States in recent decades is the growth of poverty in suburban areas. Labor market changes and rising housing prices in urban centers have contributed to more poor people living in the suburbs, where needed services and infrastructure are often deficient and difficult to maintain. Our recent research investigates the case of public transit service in Clayton County, Georgia, a suburban county located just south of Atlanta that has faced exactly these types of trends and challenges. After Clayton County lost all its local bus service in 2010, an extraordinary effort by non-profit groups, community leaders, elected officials, and transit users themselves demanded and achieved new public transit.

In 2001, as the poverty rate in Clayton County began to increase dramatically, county leaders established local bus transit service known as C-Tran. Ridership far exceeded expectations, with one county official concluding that the success was “tremendous evidence that the [service was] badly needed.” Many residents came to depend on public transit and there is evidence that some moved to Clayton County because of it. However, in 2010, facing a budget crisis spurred in part by the economic downtown, the county commission discontinued C-Tran.

But by the year county leaders eliminated C-Tran, Clayton’s poverty level had grown to twice what it was when the system began nearly ten years earlier. The effect on the large low-income and transit-dependent population was devastating. Many could no longer access essential services and economic opportunities. 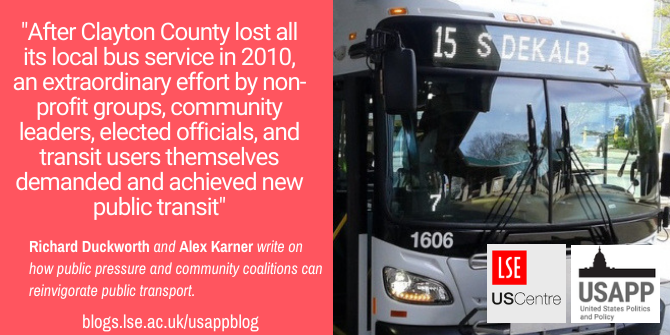 Promptly after C-Tran’s demise, a pair of state legislators formed an advocacy coalition called Friends of Clayton Transit. This group pursued a sustained effort to reestablish transit in Clayton County by joining the regional Metropolitan Atlanta Rapid Transit Authority (MARTA), which had already been operating a bus and rail system in two neighboring counties and the City of Atlanta for nearly 40 years. Joining MARTA, rather than reestablishing a local system, was thought to be the best strategy for bringing sustained transit service back to Clayton because it offered more secure future transit funding and seamless integration into the regional transit network. MARTA was openly enthusiastic about expanding, but to make it happen, transit advocates would need to persuade county leadership and voters to approve the 1 percent dedicated sales tax required for MARTA membership. Establishing the tax required authorization from the county commission and final approval by voters in a popular referendum.

In 2010 (the same year C-Tran public transit service ceased) and again in 2012, the Clayton County Commission failed to authorize the sales tax referendum that would allow the county to join MARTA. Friends of Clayton Transit coalition members spoke out in favor of the referendum and pro-MARTA sentiment among voters contributed to the defeat of two incumbent commissioners who had opposed it.

Clayton County’s next chance to join MARTA required the county commission to negotiate a contract with the agency and authorize the popular referendum by July 2014. Again, commissioners were not immediately supportive of the steps needed to join MARTA. They continued to be uneasy about allowing a sales tax hike, and some wanted to study alternatives to MARTA membership. During the spring and summer of 2014, Friends of Clayton Transit and others – faith-based organizations, labor unions, environmental non-profits, and other community groups – pressed the issue through meetings, rallies and even a prayer vigil. Under pressure from the pro-transit advocates, the commission chairman eventually came out in support of MARTA membership and the referendum. He convened a special commission meeting the day before the July deadline where the commission approved a tentative contract with MARTA and authorized the sales tax referendum. 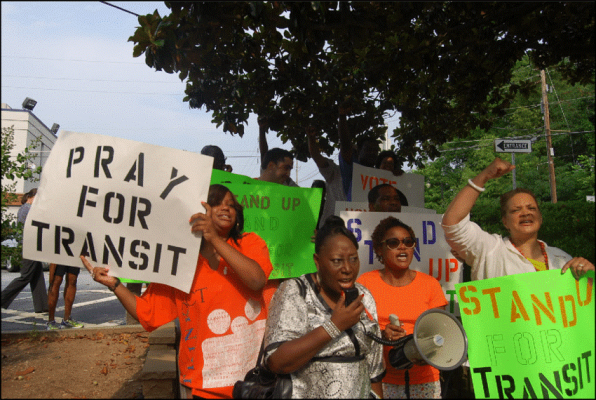 Next, Friends of Clayton Transit and its allies (including another local equity-focused organization called the Partnership for Southern Equity) turned their attention towards securing pro-MARTA, pro-transit tax votes in the popular referendum. Again, they held rallies and press conferences in addition to organizing a general get-out-the-vote effort, much of which was done in close partnerships with faith-based organizations. In November 2014, Clayton County voters approved the referendum by a margin of 46 percentage points. MARTA bus lines began operating in Clayton County in 2015 and are already more expansive than the C-Tran system that was eliminated in 2010. MARTA has also reported that ridership numbers were better than predicted and approved a future 22-mile commuter rail line in the county. 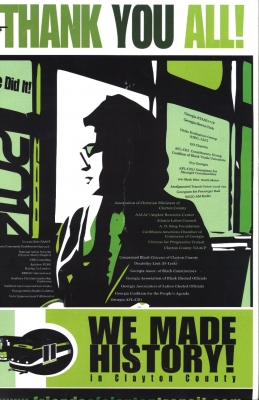 The favorable circumstances that surrounded Clayton County gaining transit service by joining MARTA are not usually present in places desperate for public services – the population had recently experienced the loss of a relatively popular bus system, and conveniently there was an established system operating in adjacent jurisdictions that was enthusiastic about expanding. However, this victory does illustrate how non-profit organizations can work with individual elected officials, community groups, and others outside of the business community to significantly alter regional transportation systems for the express benefit of low-income and transit-dependent populations. The coalition that helped usher MARTA into Clayton County challenges existing studies of the development of major urban initiatives, which often focus on the need for alignment between government and big business interests to assemble the required resources. This case demonstrates that organizing by non-government and non-business entities can also lead to large-scale transportation infrastructure upgrades.

Richard Duckworth – U.S. Department of Agriculture
Richard Duckworth is a program analyst at the USDA. He graduated from Georgia Tech’s Master of City and Regional Planning program in 2017 and then completed the U.S. government’s Presidential Management Fellowship.