In recent years, immigration has emerged as one of the most important issues that Americans believe the country faces. But what affects how legislators vote on immigration issues? In new research on state-based immigration legislation, James Avery and Jeff Fine find that when an area has more Latinos, Republicans who represent them are more likely to vote for restrictive immigration policies, while Democrats are consistent in their opposition to such measures no matter the number of Latinos in their district.

When asked to identify the most important problem facing the nation today, nearly 1 in 5 Americans select a topic related to immigration. This puts immigration behind only government dysfunction/poor leadership as the issue most in need of attention. This should not be surprising, given high-profile policy fights between President Trump and congressional Democrats on immigration-related issues like President Trump’s border wall, DACA, and birthright citizenship.

While immigration receives frequent national attention, states were debating and enacting immigration policy even before the emergence of Donald Trump as a presidential candidate in 2015. Most prominently, Arizona passed SB 1070, which severely restricted immigration before most of its provisions were struck down by the US Supreme Court. Looking at votes of individual state legislators allows us to understand the factors that lead elected officials to restrict or expand immigration.

There are large differences in how Latinos and non-Latinos view several high-profile immigration policies that have been considered to varying degrees at the federal and state levels. This is evident in public opinion data from Gallup, as we show in Figure 1. We argue that these differences give distinct incentives to Republican and Democratic lawmakers, driven by their distinctive base constituencies. 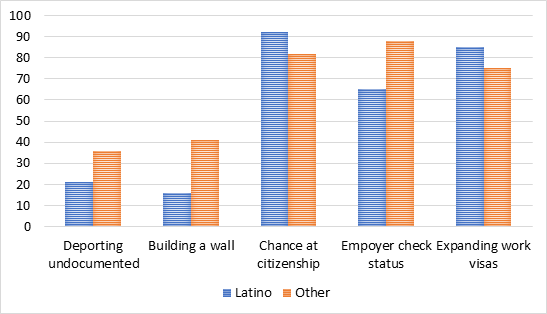 In general, political scientists find that larger groups within a constituency get better representation of their interests. This makes sense for two reasons. First, elected officials ideally should be working hard to provide outcomes that benefit their constituents. Second, a wealth of studies demonstrate that elected officials are driven by their desire to be reelected. Rational legislators, therefore, should better represent larger groups to help maximize their chances at retaining their jobs.

Oddly, many studies find no effect of larger Latino populations on the quality of representation this group receives. Instead, areas with more Latinos tend to elect Democrats, liberals, and Latinos. As a result, Latino constituencies receive better representation through the types of people they elect. We find that these characteristics of elected officials affect immigration voting in American state legislatures, with Republican, conservative, and non-Latino elected officials being more likely to restrict immigration than their Democratic, liberal, and Latino counterparts. Figure 2 presents the probability of a restrictive immigration vote, based on the partisanship, ideology, and ethnicity of the legislator. 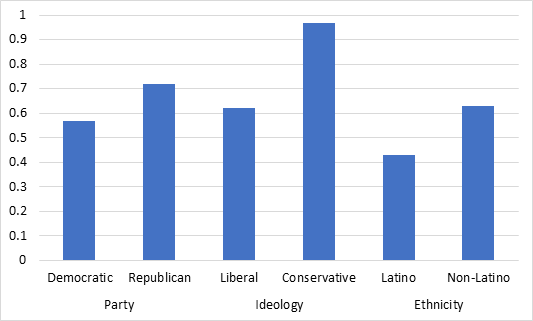 Latino Constituency Size Matters Too, But Only for Republicans

As shown above, Republican and Democratic legislators vote to restrict immigration at different levels. However, they also respond differently to having more Latino constituents. Republicans vote to restrict immigration more often when they have larger Latino constituencies, as shown in Figure 3. This pattern is consistent with what scholars call the “racial threat theory,” where larger minority groups pose economic, social, cultural, and/or political threats to many among the white majority in an area. 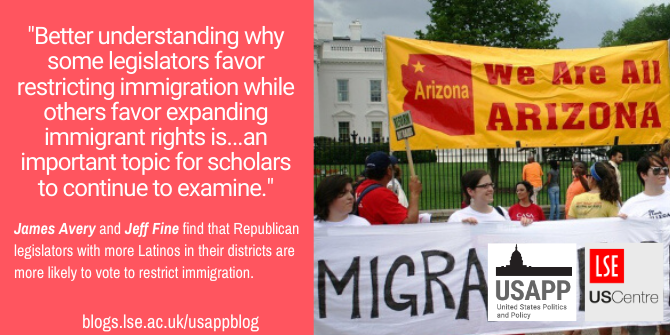 “Protesters Denounce SB 1070” by Generation Progress is licensed under CC BY NC SA 2.0

Democratic legislators, however, may not be influenced by feelings of threat because Latinos comprise an important part of their districts, and because white Democratic voters may be less likely to perceive threat from larger Latino populations than do Republican voters. As shown in Figure 3, Democratic legislators provide a consistent level of support for immigration – opposing bills that restrict immigration and supporting those that expand it – regardless of the number of Latinos in their districts. 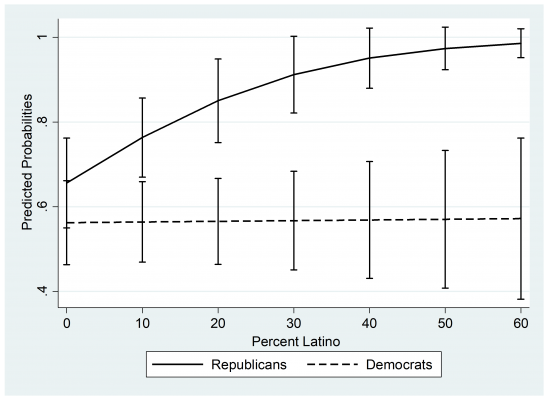 Immigration policies continue to be central in American political discourse. This is at least partly driven by the high priority given to these issues by President Trump, and the importance this issue will likely have in the 2020 presidential election. Better understanding why some legislators favor restricting immigration while others favor expanding immigrant rights is therefore an important topic for scholars to continue to examine. Our research suggests that Republican and Democratic legislators approach this topic in distinct ways, both in their overall level of support for immigration and in how they respond to Latinos in their districts.

While these findings are clear from our examination of state legislator votes in the United States, we need to do more to unpack what is driving these differences. Is this the product of the types of candidates who run and win party primaries in districts with more Latinos? Is this shaped by differences in immigration attitudes of Latinos and non-Latinos in districts and states?

Future studies also might apply our framework for partisan differences in responsiveness to constituents to see whether it applies to policies beyond immigration. For example, there are other issues with important racial or ethnic differences in public opinion, like civil rights or criminal justice reform. It might also apply to other issues that are important to Latinos, like health care and education.