Reframing the forced alienation of our information as ‘digital slavery’ makes clear the push to ‘own’ us and to subvert our behavioural autonomy, writes Mick Chisnall.

There is something odd about calling the misuse of personal data online a privacy ‘issue’. We need ‘privacy’ when we undress or talk to our loved ones; it’s about feelings like shyness and embarrassment. In the digital world we label lots of things as ‘privacy issues’; but is stealing my credit card details and using it to rack up debt really an issue of privacy? Isn’t it really like stealing my car keys and driving off? Would we call car theft a ‘breach of privacy’? Both cases are just plain old theft. Is talking about online personal data privacy perhaps a way of deflecting attention away from the nastier side of what has become an annual 250+ billion-dollar market in trafficking personal data?

In fact what is going on here is really about control of behaviour, especially purchasing behaviour. Whether through behavioural marketing or outright threat, the online world is shaping our beliefs, dictating how and what we consume and enforcing the rules. I make this argument in more detail in a recently published article. It’s time to stop talking about personal privacy online and to start referring instead to something we are rapidly normalising in our everyday lives, nothing less than Digital Slavery. But, surely ‘slavery’ is overstating the issue? It’s a word describing an abhorrent infringement of fundamental human rights, and so it  should not be applied casually. Yet, as I began to unpack the term, it really is appropriate for what is happening.

Traditionally slavery was defined as the act of holding a human being as ‘property’ or as a ‘thing’. More recently the distinction has been made between ‘chattel slavery’ for the traditional definition and ‘modern slavery’. The latter, including practices such as sex trafficking, encompasses the idea of ‘ownership’ as actual control of the slave rather than the slave being a legally owned object. ‘Digital slavery’ has aspects of both ‘chattel’ and ‘modern’ slavery. And what is enabling this trade is not the sailing ships, guns, whips and chains of the trans-Atlantic slavers but an unholy triumvirate of surveillance technology, personal data trafficking and Artificial Intelligence (AI).

Owning another human being as property

The argument revolves around two versions of the concept of ‘self-alienation’. In property law, something is ‘alienable’ if it is ‘sellable’ or able to be ‘alienated’ from one owner to another. The ‘self’ can be thought of as located somehow with a body. This has been sometimes called a ‘body-subject’. The question arises as to whether a ‘body-subject’ is or ever should be alienable. While the body-subject is made up of both material and psychological parts, the law is mainly concerned with the physical body, especially in areas such as the sale of body parts and surrogacy. 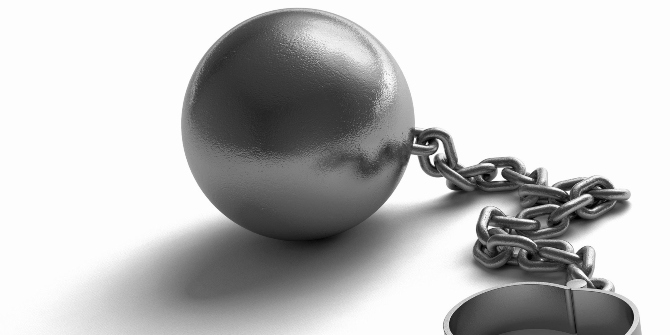 When this data is acquired by governments or corporations, legally or illegally, through obscure and lengthy contracts, trickery, manipulation or just plain theft, the body-subject is enslaved in an ownership sense. The conjunction of linked personal data, coercive and automated information gathering, and ‘forever storage’ has enabled the rise of new types of information ‘slave owners’. Personal data is mined, commodified, assetised and trafficked. The traders maintain that all this personal data they have extracted is an ‘unowned’ raw resource. Somewhat like oil, the commercial value and ownership of the resulting commodity itself is vested in those who collect (extract) and refine it. However unlike oil, governments have not yet charged for exploration/production licences, nor sought a tax levy on derived profits.

Owning another human being as control

A potential weakness in the argument that corporations and governments are wrongly ‘enslaving’ the property of the self is that it smacks of what the philosophers call ‘essentialism’. In today’s world, who can define an essential ‘good life’ that captures the values of every individual? The modern view supports the idea of individuals having the right to say what is good for themselves. So a possible line of argument runs: ‘If I want to have my personal data captured and trafficked, and my actions driven by algorithms, who is to tell me I am a slave?’

To avoid this criticism, we must consider a second type of ‘self-alienation’ – one based not on self-property, but on the obstacles put in the way of an individual living their own autonomous life. The level of self-alienation that we can experience ranges from encountering temporary obstacles all the way through to experiencing total domination, which just is slavery. In the digital world, self-alienating third-party practices resulting from personal data aggregation and trafficking can lead directly to ‘digital slavery’, because the agency and will of the citizen or consumer is actively eroded in hidden ways, and levels of coercion increased. What makes aggregated and re-purposed personal data so valuable to both corporations and governments, is its role in driving behaviour towards either increased consumer sales, or greater citizen compliance with the state, respectively. Personal data is the lifeblood of algorithms feeding online social marketing, predictive analytics, compliance ‘wizards’, BDAI (big data and artificial intelligence), and behavioural economics/nudge strategies.

Examples of these activities abound in everyday life. Evidence of targeted ‘behavioural’ online advertising based on an individual’s captured online (and sometimes offline) history is clearly present in virtually every Google search. Both governmental and commercial systems continually overstep minimal information-gathering requirements with the use of *mandatory fields to gather information – notwithstanding the ambitions of the EU’s recent GDPR initiative. Where such data is collected legally, the citizen/consumer is inevitably presented with extended mandatory legal boilerplate and notices of privacy policy, which the majority of us either accept without reading or fail to understand the true implications of. The fine line between enticement and entrapment goes largely unsupervised and unregulated online.

Western governments particularly show an unbounded enthusiasm for online citizen ‘services’. The social security agency in Australia, Centrelink, pursued a controversial Online Compliance Intervention (OCI) system, referred to colloquially as ‘Robo-debt’. This was a prime example of the aggregation and mining of personal data, collected from citizens for different purposes, in order to fuel algorithms that compel compliant behaviour. The social welfare recipient’s autonomy and ability to run their lives was diminished through forced engagement, a lack of transparency in the algorithms and a bureaucratic strategy of minimising complaints by requiring citizens to go back through the online system itself. To see where this kind of government behaviour can conceivably end up, consider the ‘dark twin’ of corporate loyalty programs, as embodied in the Chinese government’s social credit system, which provides penalties for ‘bad’, i.e. non-state-endorsed behaviour.

To grasp the whole scope of this control and manipulation one should move beyond the link between private corporations and political parties…, to the interpenetration of data-processing companies like Google or Facebook and state security agencies. … The overall image emerging … provides an adequate and terrifying vision of new forms of social control that make the good old twentieth-century “totalitarianism” a rather primitive and clumsy machine of control.