This week the Democratic Party held their online 2020 presidential nominating convention. Peter Finn writes that while history has been made with the nomination of Kamala Harris as Joe Biden’s running mate, the party’s alliance of convenience with Republican never-Trumpers could spell discord for the Democrats in the future.

Held largely virtually, though formally based at the Wisconsin Center in Milwaukee, Wisconsin, the 2020 Democratic National Convention, which has officially seen Joe Biden and Kamala Harris adopted as the Presidential and Vice Presidential candidates, has been like none of its predecessors. Here are my key takeaways from this week’s convention:

Joe Biden is officially a presidential nominee: The former Vice President has been the presumptive nominee for months, officially becoming the nominee during a colourful virtual roll call on Tuesday night. In some ways the move from presumptive to official nominee is a distinction without a difference. Yet, to leave the characterisation at that would be shortsighted. Biden has run for president twice before (1988 & 2008). After dropping out of the 2008 contest, he went on to become Vice President to Barack Obama for eight years. Beyond this, he represented Delaware as a Senator from 1973 to 2009, with his past actions sometimes causing friction with, and points of attack for, younger or more progressive Democrats (including his now running mate, California Senator, Kamala Harris). If he loses in November, Biden will still have been one of the most important recent figures in US politics. If he wins, he will be heralded by the party faithful for ousting President Donald Trump, will have a chance to respond to the COVID-19 pandemic and will be a key actor in defining the future of both the Democratic Party and the US government.

Kamala Harris is making history: Likewise, Harris was anointed by Biden as his vice presidential pick earlier this month, with her confirmation on Wednesday evening little more than a procedural formality. However, this confirmation made history, with Harris becoming the first woman of colour to be chosen as a Vice-Presidential candidate. Moreover, as Amy Tatum recently noted in this series, ‘she is the first Asian American to be on a presidential ticket; and if elected would become the first woman to hold the office of Vice-President of the United States.’ These firsts could increase in the coming years. Biden has intimated he sees himself as a ‘bridge’ to a new generation of Democratic Party politicians, making it unlikely he will seek a second term if elected in November. As such, Harris could find herself in pole position to become the Democratic nominee to replace Biden as president in 2025.

Democratic Party has dealt well with switch to digital: Since the Spring, the Biden campaign has adopted a relatively restrained posture, shifting from face-to-face campaigning to a mix of online speeches, meetings, gatherings, the use of social media and dabbling with a podcast. This approach appears to have stood them in good stead for the convention, which has built on this foundation with a slick website, live and recorded contributions from across the party and a clear demonstration of big-tent unity. 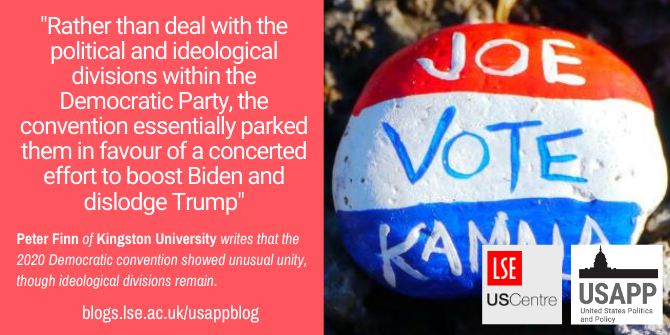 “Vote for Joe Biden & Kamala Harris” by Rick Obst is licensed under CC BY 2.0

The Democratic Party is (currently) a home for Never-Trumpers: Republicans disillusioned by the direction of their party under Trump currently find a home in a Democratic Party focused on the singular task of removing the president from office. Groups such as the Lincoln Project are encouraging such voters to support Biden, with the convention featuring contributions from Republicans such as former Ohio Governor John Kasich and a video showcasing Biden’s friendship with John McCain. Whether this marriage of convenience between Never-Trumpers and the Democratic Party can last beyond November, or will dissipate after the presidential election, however, remains to be seen.

Four years after being president, Barack Obama remains a key figure: In his convention speech Barack Obama was explicit in his criticism of Trump, arguing, among other things, that his ‘administration has shown it will tear our democracy down if that’s what it takes for them to win’. This criticism, along with similar rebukes delivered by Michelle Obama, were key moments of the convention. Having explicit backing from the Obamas is clearly a boon for Biden. That said, one wonders whether such a heavy reliance on the couple could start to become as much of a distraction as a benefit for the Democratic Party if it continues in future.

The future direction of the Democratic Party is still unknown: Despite unity around the former president, there is significant division among Democrats. Indeed, rather than deal with the political and ideological divisions within the Democratic Party, the convention essentially parked them in favour of a concerted effort to boost Biden and dislodge Trump. However, these divisions are real and long-standing. The more progressive wing represented by New York Representative Alexandria Ocasio-Cortez and Independent Senator Bernie Sanders of Vermont, for example, have long chafed at the centrist instincts of party leaders. Moving forward, if the alliance with Never-Trumpers was to become a permanent fixture of the party then this schism would likely worsen. If Harris does run to be the party’s nominee for president in 2024, a challenge from the left could certainly materialise. Interestingly, Ocasio-Cortez will be 35 in October 2024, making her eligible to run for the White House. Though it is unlikely she could secure the nomination in four years. It is certainly within the realm of possibility she could act as a galvanising force similar to Sanders in 2016.