The recent death of Supreme Court justice Ruth Bader Ginsburg will set up a bruising battle in Washington over her replacement. With just two months to go before Americans casts their ballots on November 3rd, President Trump has insisted that he has the right to fill the vacancy, whereas Democrats argue that no new justice should be confirmed until after the upcoming election. In this Q&A, Thomas Gift examines the likelihood that Republicans proceed with the Supreme Court confirmation and how this political fight will affect Trump’s chances for re-election.

Is there any way that Republicans will hold off on confirming a new SCOTUS nominee until after the 2020 election?

Politics is the art of the possible. That’s true whether Republicans or Democrats hold the majority—and right now, with a slight edge in the Senate, it’s the GOP with the keys to power. The opportunity to nominate a new Supreme Court justice is too enticing for most Republicans to pass up. It could solidify a right-leaning majority on the highest court in the land for decades. Not only could that put established rulings—like those related to the Affordable Care Act, abortion, or affirmative action—in jeopardy, but it could also block future Democratic-led agendas. This is the kind of stuff that the GOP only dreamed of when Trump was sworn into office in 2017. Of course, some Republicans may break ranks and refuse to confirm a nominee before the election on November 3rd. But Senate Majority Leader Mitch McConnell will do everything possible to make sure that position doesn’t succeed.

But won’t Republicans look like flip-floppers after refusing to hold a vote on Barack Obama’s Supreme Court pick, Merrick Garland, in 2016?

Sure, Republicans will look hypocritical in confirming a justice less than two months before the election, after refusing to vote on Garland in the election year of 2016. Sure, they risk a titanic backlash if they get trounced by Democrats in 2020, with everything from court packing to D.C. statehood to ending the filibuster being on the table. Sure, Republicans would cry foul if the situation were reversed, and at least one high-profile senator—Lindsey Graham of South Carolina—is wishing he hadn’t been quite so unequivocal in the past about not nominating a SCOTUS nominee in an election year. But this is Washington in 2020, and no serious observer expects either party to do anything except that which suits their immediate political interests. Is it high-minded statesmanship? No. Is it the reality of a hyper-polarized America? Certainly.

Who is Trump likely to nominate? And which Republicans will decide whether that nominee gets voted on before the election?

Trump has already said he’s planning to nominate a woman, and two names keep emerging: Amy Coney Barrett, a judge on the Seventh Circuit (which covers part of the Midwest), and Barbara Lagoa, a judge on the Eleventh Circuit (which covers states in the Southeast). Both have strong conservative resumes, considerable experience, and would fit the mold of jurists who’d satisfy Trump’s Republican base. In terms of names to watch in the Senate, it’s mostly the moderates who will determine whether Trump’s nominee gets a vote before November 3rd. Senator Susan Collins of Maine and Senator Lisa Murkowski of Alaska have publicly affirmed they don’t want a vote to happen until after the elections, which could result in Joe Biden choosing a new nominee if he wins. Another key figure to watch, Sen. Mitt Romney of Utah, hasn’t made public statements in either direction. 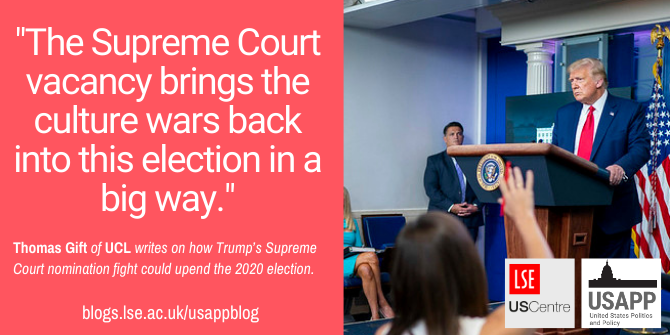 Specifically, which voting blocs will Trump’s nominee most energize?

Trump wants to remind social and religious conservatives that—regardless of what they may think of him personally—he comes through “in the clutch.” Many on the right were skeptical in 2016 that Trump would nominate the kinds of Federalist-Society-approved justices to the Supreme Court typical of a more conventional Republican president. With his previous picks of Brett Kavanaugh and Neil Gorsuch, however, those qualms have disappeared. And with Trump doubling down on his strategy of appealing only to his conservative base, there’s zero chance that Trump will deviate from that trend this time. From the deceit to the lying to the scandals, detractors have long puzzled over why Evangelicals tolerate Trump’s troubling personal and public behavior. Agree or disagree with their motivations, moments like this are precisely why.

Broadly speaking, how will the fight over Trump’s SCOTUS pick reshape the 2020 race?

The SCOTUS vacancy brings the culture wars back into this election in a big way. Last week, this race was primarily about the coronavirus and the economy. With roughly 200,000 Americans dead from the pandemic and unemployment numbers hovering over 8 percent, neither boded well for Trump. Those issues won’t abruptly fade from public view, but their importance will become blurrier with America’s focus riveted on a bruising fight over Ruth Bader Ginsburg’s replacement. On balance, a distraction from the coronavirus and the economy helps Trump. It also magnifies the ideological cleavages in the electorate and activates party allegiances. For months, experts have warned about how unexpected events could throw a wrench into the 2020 race and change its fundamental dynamics in a heartbeat. We’re about to see that unfold.

Thomas Gift – UCL
Thomas Gift is a Lecturer of Political Science at UCL, where he is director of the Centre on US Politics (CUSP). He is also a Visiting Fellow at the LSE US Centre.