If Republicans are so convinced that the 2020 election was rigged, why aren’t they protesting? Ben Margulies argues that the authoritarian nature of Trumpism, where his supporters are encouraged to leave politics to him, may be undermining any vigorous populist response.

Donald Trump thinks he won the 2020 presidential election. At least, he has certainly devoted a great deal of time to claiming that he won. His representatives and allies have alleged fraud in several key states, without success. At an institutional level, Trump’s claims have made little headway; electoral authorities and courts, including Republicans, have rejected allegations of fraud. There seems to be little appetite towards among Republicans for the kinds of measures which would be needed to overturn the election result, such as demanding that Republican-majority state legislatures in closely contested states like Pennsylvania disregard the vote tallies and appoint their own presidential electors, pledged to Donald Trump. Trump’s own General Services Administration belatedly accepted that Biden was president-elect on November 23.

Trump seems to have had more success convincing his voters that the election was unfair. A Reuters/Ipsos poll, undertaken in mid-November, found that 52 percent of Republican respondents believed that Trump had “rightfully won.” Only 26 percent thought the result was “legitimate and accurate.” An Economist/YouGov poll produced an even starker result – 86 percent of Trump voters denied Biden had won legitimately. Some scholars contend that Trump voters say Biden cheated because they want to show support for Trump or anger towards pollsters, but it is clear many really believe fraud occurred. On November 15, Trump supporters rallied in Washington DC and other cities, endorsing  the president’s allegations of malfeasance. On December 1, a Georgia elections official condemned Trump supporters who had sent death threats to election officials and their families.

There were widespread fears prior to the November 2020 elections that Republicans would refuse to accept a Biden presidency (and Democrats a Trump re-election), and attempt to obstruct it. One set of concerns focused on the legal or political manoeuvres that Trump and the GOP might employ. Another focused on the threat of mass protest or public violence. Through the courts and his rhetoric Trump and his party have indeed tried to put a spanner in the machinery of election certification, and made an attempt to influence Michigan state legislators. But where are the mass protests? If many Republicans are so certain that Trump was denied the election by fraud, why are they not out on the streets demanding that he stays in office?

Many of the problems Trump faces in rallying his supporters stem from the nature of the Trumpist project. Donald Trump leads a populist radical-right movement. Populism, as Robert Barr wrote, is usually a top-down process. Barr called it a “plebiscitarian” form of linkage between the populist politician and their electorate. The populist leader encourages the people to acclaim them and elect them, but otherwise to leave politics to their chief. That is why the most archetypal form of political participation in Trump’s movement is the rally; it is a form of acclamation. But this sort of top-down structure does not encourage the sort of mass mobilization that would bring down a government. It is very different from the sort of grassroots mobilizations against (actually) rigged elections like the EDSA Revolution in the Philippines in 1986, or the toppling of Slobodan Milošević in Yugolsavia in 2000. As Ed Kilgore wrote in New York magazine, Trump made no real effort to mobilise either Republican office-holders or voters to pressure election officials and state legislatures.

Voters who choose populists often display a cynicism about the political system or its actors. In 2019, Catherine Fieschi and Paul Heywood pointed out that cynicism – a belief that everyone in politics is out for themselves – is different from a rejection of politics or the constitutional system as a whole. Sometimes, cynics will accept the system, and just seek their own “fixer” to work the institutions to the advantage of their followers; instead of making a moral condemnation of the system, they try to bend it to their advantage. Fieschi and Heywood identify Silvio Berlusconi, the Italian tycoon-politician, as an example of such a “fixer,”In her book Populocracy, Fieschi describes Italian voters seeking out new populists to work the system as they become disillusioned with the existing set of manipulators.

Trump certainly portrayed himself as an unscrupulous dealmaker in a bent system. The problem is that, if you believe that the system is corrupt anyway – and if you have already accepted that as the basis of the system’s functioning –  then it does not come as a surprise that your opponents “steal” an election. Cynical voters are in effect saying that they want someone who will play dirty, so they lack a moral basis to be outraged when their opponents (allegedly) do the same, just as the cynics predicted. Cynical voters are thus unlikely to rally angrily in defence of abstract democratic norms. 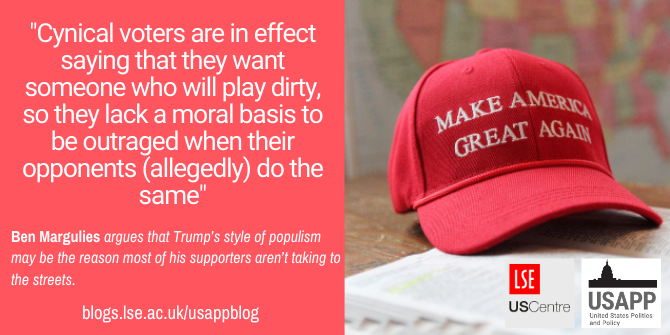 Photo by Aubrey Hicks on Unsplash

Disorder is for Democrats?

Ironically, one problem the Republicans may face is their own association of violent protest with Democrats. In a BBC piece on the November 15th pro-Trump rallies, the BBC reporter interviewed one woman who said, “We won’t like it, but you will not see us rioting on the street. I can almost guarantee you that, we will not be rioting because that’s not what Republicans are…” In an article published on November 8th, Dionne Searcy of The New York Times relates the disdain of Republican voters in Nebraska for Democratic protests. She quotes Tucker Sheets, who says, “In the 2016 election after Trump won, we got nothing but crying and whining and trying to get rid of him for four years. I don’t want to do that. I want to move on and keep going.”

As with everything in the US, this hostility to protests has much to do with race. For many white Americans, disorder, criminality and upheaval are associated with people of color, especially African-Americans. Those whites who hold such racist values tend to support Donald Trump. Participating in public protest or violence might strike them as unattractive because they associate these activities with Black Americans, which would defeat the point of the racial hierarchy they are invested in defending. (When racist whites do resort to protest and violence, they tend to portray it as a countermeasure against the activities of Black people, a thread connecting Jim Crow-era lynchings to contemporary defences of police brutality.)

To return to my earlier point about cynicism: most Black Lives Matter protesters, whom Republicans so often condemn, are not in the least cynical. They have very strongly held norms about how a constitutional democratic republic should function, and this is why they mobilize in such large numbers. Many Trump voters also have strong views about how the United States should be – or in this case, who should be in the White House – but they either dislike the idea of protest, believe themselves to be incapable of changing anything, or think the system is hopelessly compromised.

What does this mean for the politics of the United States in the longer term? Republicans may be reluctant to mobilize en masse to preserve Donald Trump in office, but that does not mean that they will necessarily accept – or at least, fully accept – that Joe Biden is the legitimate president of the United States. As Adam Serwer has noted, Republicans no longer consider Democrats to be fully legitimate participants in US politics. That fracture in the imagined community of Americans will not heal even if the constitutional transfer of power takes place.

The longer this cold civil war lasts in the United States, the weaker constitutional and procedural norms will tend to become. A future Republican candidate might not appeal to cynicism as Trump has, but to a more robust authoritarian philosophy which promises moral revolutions, which in turn might license or encourage mass mobilization. The only thing that might be more dangerous to the Constitution than a ruthless cynic is a ruthless true believer.