While they are not Trump, we can expect Joe Biden and Kamala Harris to continue to reinforce unjust American power at home and abroad.

While they are not Trump, we can expect Joe Biden and Kamala Harris to continue to reinforce unjust American power at home and abroad.

Like Obama before them, many in the US and across the world have celebrated the election of Joe Biden and Kamala Harris as a win for hope and change. Tye Salandy argues that Biden and Harris’ political records so far in fact point to a continuation of the internal and global violence that has come to characterise US politics.

I remember when Barack Obama won his first term as US President in 2008. Late that night, at the moment his victory was confirmed, I heard a massive noise of joyful screams and applause from the neighborhood. At that point, I knew we were in for a rough ride. In the immediate aftermath, my colleague at Trinicenter.com wrote an insightful piece titled “President Barack Obama: Change…What Change?”  that was prophetic of Obama’s presidency. Obama was awarded the Nobel Peace Prize in 2009, yet his two terms showed an appetite for war-making and violence, albeit cloaked beneath polished words, diplomacy and the goodwill of many people excited to see a non-white face leading the White House.

Obama, Vice President (now President-elect) Biden and Secretary of State Hillary Clinton oversaw the illegal invasion of Libya, turning a stable country into a zone of conflict. Critics would describe Obama as being more Bush than Bush as covert drone strikes were dramatically increased, some estimate ten times morev than what occurred under George Bush Jr. Despite a seemingly tense relationship with the Israeli Prime Minister, he signed a $38 billion military aid package to Israel. Under the fancy rhetoric of “hope” and “yes we can,” mass surveillance programs expanded internally and externally.

From Bad Cop to Good Cop

Twelve years ago, the world was good copped/bad copped by Obama and Bush/McCain, and the cycle continues, as many in the world again celebrate the election of the good guy Joe Biden over the bad guy Donald Trump. Trump’s four years of blatant dishonesty, disdain for basic science, shallowness, misogyny, race-baiting, and childish behavior have given his critics more than enough evidence that he is not a worthy leader. Trump as the supreme bad guy rightly problematizes overt racism while drawing attention away from structural racism and the polite racism that is pervasive in white liberal circles. Trump with all his problematic behavior is an unwitting outlet for racial escapism in which racism is recognized in its overt and hostile (Trumpian and Republican) forms but not in its everyday manifestations that have been so central to Euro-American capitalism. Racism is then seen as an evil person phenomena rather than as a global, national and individual system of rewards and privileges accorded based on closeness to whiteness.

The euphoria around the election victory of Joe Biden and Kamala Harris is reminiscent of the Obama victory of 2008. While representation and firsts are important and have their place we must be careful of empty symbolism (or tokenism). For us in the Caribbean, women leaders and leaders that look like us have not transformed the structures of inequality or the complicity of governments entangled within global capitalism. In one sense it is easy to see how, in the context of white supremacy and patriarchy, the election of Obama then, and Harris now could make many people feel good. Beyond the shallowness of these symbols, the core structures of unjust American power do not just continue but are reinforced by the notions of merit, hard work and the fulfilment of the American dream.

Democrats and Republicans: Two Sides of the Same Coin

The differences between the Democrats and the Republicans is that the Republicans are relatively crude and straightforward in promoting war, white supremacy and US imperialism as core values, while the Democrats are more measured and diplomatic. Democrats speak the language of peace, hope and dialogue, yet behind this the internal and global violence of a declining US empire continues unabated. This explains how Trump is globally reviled (understandably so), but Obama is revered by many despite his record of war, intervention and violence. While Trump was a clear symbol that something was wrong in the White House, Obama and the Democratic tradition of governance took the edge off the empire and lulled Americans and people globally into a state of sleep and complacency.

Biden, Harris and the Illusions of Change

Joe Biden has spent a career in leading roles in American power structures and his legacy is anything but progressive and transformational. In 1994 the Violent Crime Control and Law Enforcement Act, also called the Clinton Crime Bill or the Biden Crime Law was passed. Joe Biden was influential in this law that was instrumental in overwhelmingly targeting and incarcerating people of color. He supported the illegal US invasions of both Afghanistan and Iraq and the expanded drone assassinations under President Obama. Like Harris, he is a strong supporter of Israel. His public speeches of healing and unity seem a far cry now from back in the civil rights era where he opposed busing and desegregation. 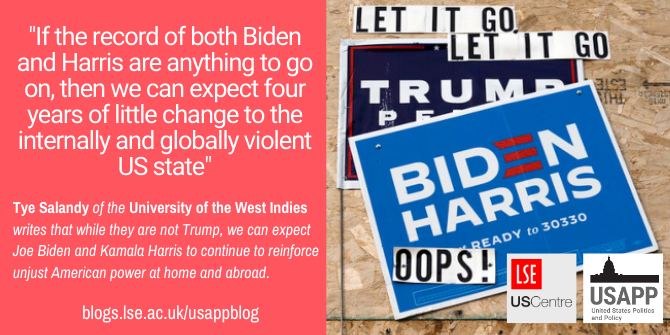 “Biden Harris and Trump Pence signs at Inter-County Cooperative Publishing Assn. after the election in St Croix Falls, Wisconsin” by Lorie Shaull is licensed under CC BY SA 2.0

Kamala Harris’ ascendency to power may seem to be an example of hard work and the shattering of a glass ceiling that hold women back. However, for anyone truly interested in justice her record is not the example on which transformation can be built. During her time in California as District Attorney and Attorney General, Kamala Harris is credited with a Back on Track program (aimed at keeping young offenders out of jail), an open justice database (for public access to crime statistics) as well as implicit racial bias training for cops. Yet, while Harris has positioned herself as progressive and a reformer, beyond a few initiatives her record is one of upholding the status quo.

Harris pioneered a truancy bill that aimed to punish and jail parents of children who missed school with little consideration of the sociopolitical context that truancy occurs in. After the Supreme Court ruled that California reduce its overcrowded prison population that was suffering starvation and inhumane treatment, Harris’ office argued that this would reduce the prison labor pool (Though it should be noted that at the time, Harris herself quickly stated that she did not agree with this argument). Harris is on record pledging unconditional support to Israel  who, empowered by the strategic and special relationship it enjoys with the United States openly defies international law and numerous UN resolutions around human rights abuses. According to columnist Vineeta Singh:

Kamala Harris’ career shows us how, if we use our privileges correctly, play by the rules, don’t scare white people by making radical claims (for example, that poor Black people matter every bit as much as any wealthy person); if we are willing to put our smiling “diverse” faces as stamps of approval on white supremacist policies , we too can be the face of white supremacist mass incarceration.

If the record of both Biden and Harris are anything to go on, then we can expect four years of little change to the internally and globally violent US state beyond smiling diverse faces, platitudes and inspirational meme-worthy gestures and words. Beyond the feel-goodism of the Biden and Harris leadership, there are many people within the US and globally who are negatively affected by US policies. Mass surveillance and erosion of privacy, systemic racism, police brutality, US imperialism and intervention, unbridled neoliberal capitalism and the ongoing industrial prison complex are all ongoing issues that are affecting the global village. The embeddedness of both Biden and Harris in American neoliberal capitalism that easily prioritizes power and profit over people and the environments suggest that we be cautious about the hope and change that they allegedly represent. Biden and Harris offer us a very different approach to Trump, reminding us that US imperialism does not have to be white, loud, hostile and belligerent. It can be brown, soft, polite and diplomatic.

Tye Salandy – University of the West Indies
Dr Tyehimba Salandy is a sociologist, educator and activist from the Caribbean twin island republic of Trinidad and Tobago and an Atlantic Fellow for Social and Economic Equity. His research focuses on globalisation and development, inequality, Caribbean radical thought, coloniality/decoloniality, and subaltern challenges to hegemonic knowledge, and he is particularly interested in the inequalities in the production of knowledge. He has lectured and delivered interactive presentations on aspects of sociology, youth development, Caribbean history, religion, culture and the psycho-social impact of colonialism, at schools, organisations and communities throughout Trinidad and Tobago and the region. He is a research fellow in the Sir Arthur Lewis Institute of Social and Economic Studies at the University of the West Indies. He is also a director at the Institute of Indigenous Knowledge, Empowerment and Research (IKER Institute), which runs ongoing projects aimed at encouraging ecological livelihoods, dialogue and social justice.