This week, Donald Trump will be the first US president in history to face a second impeachment trial. Although many experts think that a “not guilty” verdict is a foregone conclusion, recent polling suggests that a majority of Americans think that Trump should be convicted and barred from holding federal office. In this Q&A, Thomas Gift examines Trump’s approval numbers, whether the outcome of the trial is essentially predetermined, and what the political implications of acquittal might be for Republicans and Democrats.

Recent polling suggests that a plurality of Americans think Trump should be convicted in the Senate trial. What should we make of this?

It’s clearly notable that millions of Americans who cast their ballot for Trump no longer think he’s fit for office. Especially for a president whose base has been so loyal, it lends credence to the idea that—even by Trump’s standards—his role in the Capitol insurrection on January 6th was different than his past misconduct. Still, we shouldn’t lose sight of the clear partisan split here. Depending on the poll, about 80 percent of Republicans still want an acquittal. That won’t be enough to force a broad political recoil among GOP senators. It’s also worth noting that Trump’s defense team hasn’t been waging an aggressive PR battle during the last few weeks, and it’s possible that the polls could shift once the trial gets underway. That’s especially true given that Trump’s approval numbers actually went up, rather than down, at the start of his first impeachment.

Is there any chance the Senate trial could end in Trump’s conviction?

It’s extremely unlikely. Republican senators have an easy exit option here. If they choose, they can simply sidestep the merits of the case and rationalize a vote to acquit based on the disputed claim that impeachment can’t apply to a president once he’s left the White House. In late January, 45 Republican senators voted that the impeachment trial was unconstitutional on those grounds. Democrats struck down that proposal, but there’s nothing stopping Republicans from continuing to pursue that procedural argument. Questioning the constitutionality of the trial is the safe harbor for Republicans. They can tell Trump supporters that they voted “not guilty,” without actually having to defend Trump’s actions. It’s a convenient option, and it’s a key reason why the outcome of the trial seems to have an air of inevitability about it. 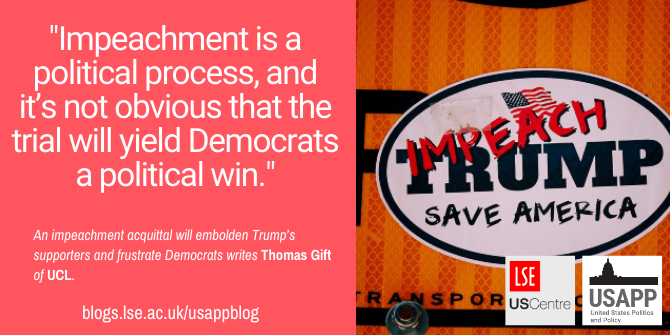 What will Trump’s defense involve? How will Democrats counter it?

Trump’s defense team will try to make the trial largely about the First Amendment. We’ll hear about the 1969 Supreme Court case Brandenburg v. Ohio, which essentially stated that speech is constitutionally protected unless it’s “directed to inciting or producing imminent” violence. Trump’s lawyers will assert that, if one looks at the plain meaning of Trump’s speech on January 6th, he’s asking his supporters to fight for election integrity in a general sense, not explicitly calling for violence. Democrats will counter by saying that context matters, and Trump should have reasonably envisioned that his fiery language—especially amid tensions resulting from his false election-rigging claims—could provoke unrest. They’ll also argue that Trump doesn’t have to violate the law to be impeached because not all impeachable acts need to be criminal.

If Trump is acquitted, what will the political fallout be?

The default answer is that it will further inflame polarization. Democrats will feel aggrieved because Trump wasn’t held accountable. And not only that, the fact that acquittal will partly result from a procedural rather than substantive argument—i.e., Republican senators insisting that impeachment can’t apply to former presidents—will breed even more resentment. Trump, by contrast, will spin his acquittal as something it’s not: an exoneration. That will embolden his supporters and—importantly—ensure that Trump is able to dangle the possibility of a 2024 run over the GOP. As a principled matter, Democrats may think that impeachment was the only option because to not pursue it would enable a culture of impunity. But ultimately, impeachment is a political process, and it’s not obvious that the trial will yield Democrats a political win.