Joe Biden’s recent trip to Europe—with included meetings with G7 allies in the UK and Russian President Vladimir Putin in Geneva—was the American president’s first major foray onto the world stage since taking office. In this Q&A, Thomas Gift gives his overview of Biden’s trip. He explains what issues were discussed, why we shouldn’t be surprised that the meetings focused more on broad goals than concrete policy details, and what the talks mean for Biden’s international agenda.

What were your overall impressions of President Joe Biden’s recent trip to Europe?

Biden has taken countless high-profile diplomatic trips during his career, but this the first time we’ve truly seen step onto the world stage as president. So, both symbolically and substantively, it was a notable moment. When evaluating the visit, it’s important to keep in mind expectations. Experts weren’t anticipating major substantive deals to emerge from the talks—and that turned out to be accurate. The White House mostly framed the G7 summit as an opportunity to hit the “reset button” on international relations after four turbulent years under Donald Trump and as a chance for Biden and Western allies to chart a broad vision forward. So, we heard lots of aspirational rhetoric about rallying behind shared priorities: promoting democracy, combatting climate change, ensuring an efficient rollout of COVID-19 vaccines, and so on. All of the G7 leaders confirmed that talks were productive. But it’s just a start. The devil, as always, is in the details. And most of those details—whether it regards a potential US-UK trade deal or a global minimum corporate tax—still need to be hashed out.

What does the trip portend for Biden’s ability to make progress on his global agenda?

Overall, we should have tempered expectations about what Biden can achieve internationally. Last week, I wrote an op-ed on this topic in The Hill with my UCL colleague Julie Norman. We argued that there are many reasons why—even if Biden touts the virtues of multilateralism—achieving major goals with partner countries will be hard. One is simply that Biden is governing more as a domestic than a foreign policy president. He’s made clear—through several outsized spending bills—that his focus is on making investments within America’s borders. Another challenge is the huge partisan divide that Biden faces in Washington. US presidents have more latitude to operate in foreign policy without the backing of Congress. Still, Biden may not want to expend scarce political capital on global issues that provoke Republican backlash and where divisions are even rife within the Democratic Party. Finally, there are many areas where G7 leaders don’t agree on the substance of policies—such as how to deal with China—even if they express broad solidarity on objectives.

US leadership is still valued. Especially against the backdrop of a rising China, American allies—both in Europe and elsewhere—are eager to maintain a united front against Beijing and to find common ground with the US on critical threats. Compared to under Donald Trump’s “America First” foreign policy, there’s more optimism about the international community adopting collaborative solutions on issues like the environment, public health, trade, and security. At the same time, there’s understandable reluctance within the G7 about whether the US will be a reliable partner over the medium- to long-term. Trump’s resilient support with the Republican Party—and the possibility that either Trump or a “Trump-like” candidate might beat Biden in 2024—is a concern in many Western capitals. Particularly for deals predicated on long time horizons, foreign leaders may worry that the US could renege on agreements in the future if a new administration comes to power. That makes it harder to forge compromises now on policies that American allies might otherwise support. 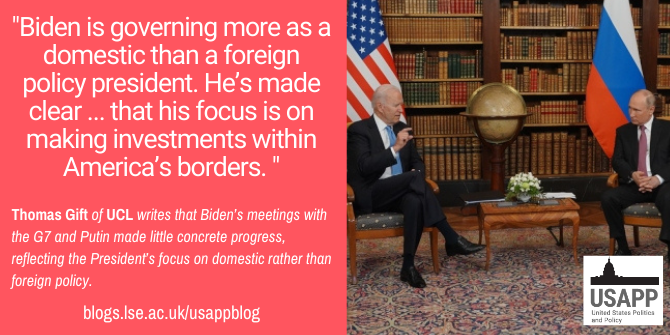 How should we interpret Biden’s meeting with Russian President Vladimir Putin in Geneva?

In Putin, Biden confronted the leader of a geopolitical adversary of the US, and relative to his talks at the G7, the meeting marked a sharp pivot in both tone and substance. There was no shortage of topics to discuss in Geneva, including nuclear arms control, cybersecurity, election interference, Ukraine, NATO, economic sanctions, and political freedoms and human rights. Biden, in particular, has had some harsh words for Putin in the past. For example, he called him a killer back in March. But recently, he’s dialed the language down a bit, referring to Putin as a “worthy adversary.” It’s again unsurprising that no genuine breakthroughs resulted from the talks with Putin. But certainly, Biden wanted to communicate a relatively tough line against Russia and also to broadcast that message to American voters. The point that Biden reiterated most often during his trip to Europe is his belief in the imperative of democracies joining together to counteract authoritarian governments. Those targets include, principally, the regimes in Moscow and Beijing.