The January 6 committee — a US House panel charged with investigating the 2021 Capitol insurrection — held its first day of hearings last week. In this Q&A, Thomas Gift explains key take-aways from the proceedings, how the news is playing to an international audience, and what the findings could mean for US domestic politics heading into the 2022 midterm elections.

What are your key take-aways from Day 1 of the hearings? What is a “success” for the panel?

There weren’t any bombshells, but we did get higher resolution details about key elements of January 6 from the Congressional committee investigating the Capitol insurrection. One is confirmation of how Trump truly abandoned all attempts to thwart the violence at the Capitol, which contrasted sharply with the actions of former Vice President Mike Pence who had issued orders to the military to respond to the insurrection. Another is the pivotal role of far-right militia groups, especially the Proud Boys and the Oath Keepers, in executing a premeditated plan for the storming. We also learned that some of Trump’s inner circle — including daughter Ivanka and former Attorney General Bill Barr — appeared to reject the former president’s false election claims.

Whether Day 1 was successful for Democrats really depends on how you define the goal. If it’s to alter Republicans’ minds about Trump (or to build the public case for his indictment), it’s hard to envision that happening. That says less about the persuasiveness of the investigation, and more about how Americans see the probe — through the prism of partisanship.

Does airing everything that happened that day remind US allies of how quickly a country can slide into the dangers of populism?

Even before January 6, the extent to which other Western countries looked to the US as a model democracy was probably overstated. For nearly four years, Trump had already laid bare unsavory elements of the country’s politics. From attacks on electoral integrity to the free press, impunity was clearly Trump’s legacy.

But there’s no doubt that the Capitol insurrection exposed an underside to the nation’s political culture that hadn’t been fully grasped, especially abroad. The lesson: If democratic backsliding can happen in the US, it can happen anywhere. It’s one thing to witness the dangers of unbridled populism, led by strongman-type leaders, wreak havoc across authoritarian regimes. It’s another to witness it in America. The fact it occurred so viscerally and with such force has to be a wake-up call, particularly for parts of Europe already experiencing a surge of far-right extremism. 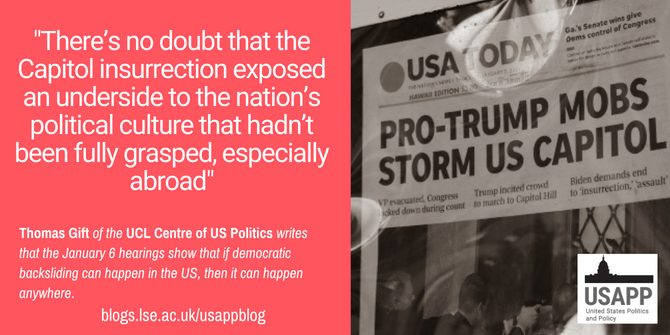 Photo by little plant on Unsplash

Do the hearings signal that the US is working to turn a corner and correct course to make sure that similar events don’t recur?

The January 6 commission is a step, but it’s only a step. Whether the US turns a corner will be shaped by what happens at the ballot box in 2022, and especially 2024. Americans opted to untether themselves from Trump once in 2020. Whether they’ll do so again if presented with that choice is unclear.

What Trump did on January 6th speaks for itself. But what also speaks for itself is that Trump remains the prohibitive favorite to win the Republican nomination in two years. Until the GOP can detoxify itself from Trumpism and snap back to a party that’s not held captive to the cult of one leader, no amount of investigating or political probes will normalize the country’s party system. Unfortunately, those political antibodies don’t exist right now. Many rank-and-file MAGA voters believe that the January 6 probe is a witch-hunt, a hoax, and a smokescreen — a narrative that’s being pushed even by “establishment” Republicans, both in Washington and across the states.

Is any of this likely to affect public opinion, especially as the country heads into the 2022 midterms?

Democrats might get a short-term bump in the polls, but that upshot will be fleeting. Footage of the Capitol insurrection has played seemingly endlessly for a year and a half in the US, and new details won’t change the basic narrative. It’s even possible some Democrats have miscalculated by hyping up the hearings. Politics is about managing expectations. The more ambitiously Democrats tout the hearings as a game-changer, they less likely they are to emerge with a political win.

Never-Trumpers are watching the hearings intently, but they’re voting Democrat anyway. Meanwhile, Fox News initially refused to air the hearings live (though it has now reversed this stance), and celebrity anchors like Tucker Carlson are framing the sessions as “America’s ruling class” delivering “yet another lecture on January 6.” So ultimately what we’re left with is entrenched partisanship. As important as they should be, the January 6 hearings will be an afterthought for most voters.