In the United States, undocumented immigrant women are often subjected to reproductive injustices, including the denial of abortions. dangerous shackling, non-consensual sterilization, and a lack of medical care. Brittany Leach looks at the far-Right discourses which simultaneously see fetuses as citizens while seeking to punish pregnant undocumented women immigrants. She writes on how the contradictions of these pro-life and anti-immigrant discourses are clouded by the far Right and argues that feminists should fight to end the imprisonment of pregnant immigrants – and all others – for civil immigration offenses.

In 2017, undocumented immigrant minor Jane Doe was detained and denied permission to receive an abortion, even though she planned to get one without government support. Doe’s rights were eventually upheld in Garza v. Hargan, but only after a long court battle. Meanwhile, other pregnant immigrants in US immigration prisons suffered other reproductive injustices, including dangerous shackling, non-consensual sterilization, and lack of medical care.

But why and how did this happen? Why seek to prevent Doe from having an abortion, if her fetus is viewed as an “anchor baby” whose existence threatens the American nation? Conversely, if all fetuses are cherished “fetal citizens,” why subject pregnant immigrants to conditions that endanger their fetuses?

One might answer: “because the point of these policies is to punish immigrant women”. This answer is not wrong, but it is too simple. It does not explain the many different forms of reproductive injustices immigrants face, why pregnant immigrants are targeted, or how the far Right is able to present contradictory policies as a coherent agenda. Feminists should not assume that anti-abortion and anti-immigrant rhetoric or policies are automatically compatible, just because both are supported by the same constituencies and officials.

In search of a deeper answer, my research examines pro-life and anti-immigrant discourses in Garza v. Hargan and beyond. A discourse is a set of stories, images, concepts, arguments, and actions that share a central idea or theme. For example, the pro-life movement describes fetuses as “people” or even as “citizens,” to encourage support for anti-abortion policies. Likewise, opponents of immigration use words like “illegal” or “criminals” to portray immigrants in a negative light, even though immigration violations are officially classified as civil offenses (like parking tickets), not crimes. The term “anchor babies” is used to present immigrants’ fetuses and children as “fake” or “fraudulent” citizens by suggesting that their mothers came to the US for the wrong reasons.

However, pro-life and anti-immigrant discourses often contradict each other. On one hand, many in the pro-life movement present their values as universal. They claim that all fetal life is sacred. Some, like Supreme Court Justice Brett Kavanaugh in his opinion in Garza v. Hargan, even claim that opposing abortion protects women addition to protecting fetuses. But if that is true, supporters of the pro-life viewpoint should be horrified when immigrant women are shackled around their bellies, causing miscarriages. On the other hand, anti-immigrant discourse presents harsh border enforcement measures (including immigration prisons and inhumane conditions within them) as important for border security. Opponents of immigration, like Judge Karen LeCraft Henderson, Judge of the United States Court of Appeals for the District of Columbia Circuit, in her opinion in Garza v. Hargan, claim these methods are necessary to preserve law-and-order and to deter future unauthorized immigration. Yet, even though she portrays Doe and her fetus as dangerous, Henderson objects to allowing Doe to have an abortion.

Another example is the contradiction between the pro-life idea of “fetal citizens” and the anti-immigrant notion of “anchor babies.” If citizenship can be determined before someone is born, as the idea of “fetal citizens” implies, then presumably any fetus who is likely to be born on American soil should be considered already a US citizen in utero. This would mean that undocumented immigrants’ fetuses are essentially US citizens who have rights, even if their “mothers” do not. However, “anchor babies” imagery presents these same fetuses as foreign and dangerous. Sometimes, this harmful and racist story about threatening “anchor babies” is used to claim that undocumented immigrants’ offspring should not be considered citizens even after they are born on US soil. But if “anchor babies” are considered foreigners who threaten the well-being of the nation, there is no reason to worry about immigrants having abortions.

I argue that they use two methods. The first is called “debilitation.” Debilitation refers to systematically ruining a population’s quality of life by exposing them to health risks and broken infrastructure, without allowing this mistreatment to become so severe that people die from it. This term accurately describes the conditions of pregnant women in immigration detention. They are routinely denied medical care and exposed to health risks like shackling, but if too many women started to die in immigration prisons, there might be public outcry. For politicians who wish to deter immigration by putting immigrants in unpleasant and even dangerous detention centers, debilitation offers a way to do that without overtly supporting violence against pregnant immigrants, which might offend pro-life supporters who view fetuses as innocents that deserve protection. 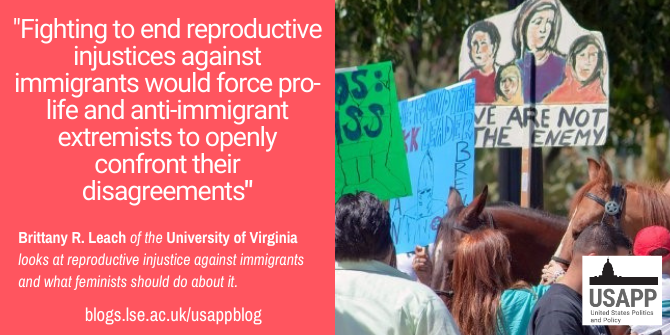 The second method is called “paralegality.” It refers to the idea that immigration policy is often made by executive agencies and border enforcement officials, rather than legislators. This allows legislators to leave it up to bureaucrats and immigration police to decide how much risk immigrants should face during arrest, detention, and deportation. If these lower-level enforcement agents miscalculate, and someone dies or suffers a miscarriage (which is a death according to pro-life activists), policymakers can evaluate the political climate and decide after the fact whether to defend or criticize the decisions of border enforcement agents. They can claim they did not intend for anyone to get hurt, blaming “bad apples” among the immigration police. Alternately, they can applaud the vigorous enforcement efforts of the border police, perhaps while expressing regret for the unfortunate outcome in a particular case that makes the news. This means they can decide to cater to their pro-life supporters or their anti-immigration supporters on a case-by-case basis.

Still, the question remains: why does anyone want to subject immigrant women to miscarriage risks and other health dangers, without owning up to it? Based on my research, I believe the answer is that far-Right extremists in the US want the future population of the nation to stay predominantly white, and Right-wing politicians do not want to lose these extremists’ support. This answer fits with the history of reproductive and racial injustice in the US. Historically, women of color and other “undesirable” women’s reproduction has been suppressed through methods like forced sterilization, while white women’s reproductive freedom has mainly been violated by restricting abortion and birth control. This trend has grown more complicated in cases like Doe’s, because immigrant women are now prevented from having abortions or safe and healthy pregnancies. However, the result is still that all women suffer reproductive injustice and that women of color suffer the most.

What should feminists do if my analysis is correct? We should fight to end imprisonment of pregnant immigrants – or anyone – for civil immigration offenses. It is not enough to simply provide better reproductive healthcare for immigrant detainees, because the same incentives to “debilitate” will still undermine the quality of care. This is best, not just for immigrant women of color, but even for white native-born women who wish to live in a world where our reproductive decisions are not a matter for the government to decide. Fighting to end reproductive injustices against immigrants would force pro-life and anti-immigrant extremists to openly confront their disagreements, potentially weakening their alliance. Successfully defending immigrants’ reproductive rights would also require feminists to build a powerful movement that fosters solidarity among diverse women, transforming structural conditions and public discourse in the process.

Brittany R. Leach – University of Virginia
Brittany R. Leach is a Lecturer in the Department of Women’s, Gender, and Sexuality Studies. She recently received a PhD in Political Theory from the University of Virginia. Her primary areas of research and teaching are feminist theory, transnational feminism, reproductive politics, and Continental political thought in the modern and contemporary periods.