At the one year anniversary of Joe Biden’s inauguration, the President’s approval ratings are at their lowest point yet, with COVID-19 lingering, inflation rising, and key legislation stalled. With the 2022 midterms less than a year away, moderate and progressive Democrats alike are calling for a reset. Is that still possible? In this Q&A, Julie Norman discusses the highs and lows of Biden’s presidency thus far, and the outlook for the administration moving forward.

What is Biden’s record so far on domestic policy?

Biden has had ups and downs on the two core domestic issues of his first year: COVID-19 and the economy. At the beginning of Biden’s term, the administration came out strong on the pandemic with a massive vaccine rollout campaign that saw over 70 percent of Americans at least partially vaccinated by late summer. However, Omicron has presented new challenges that reveal failures in the administration’s COVID-19 planning, including a lack of crucial investment in rapid testing, while the Supreme Court has recently blocked Biden’s vaccine workplace mandate for large companies.

On the economy, Biden managed to pass an early $1.9 trillion COVID-19 relief package and a $1.2 trillion bipartisan infrastructure bill. But his signature Build Back Better bill is stalled in Congress, and while unemployment is low and wages are rising, inflation is at its highest point in decades. Democrats are still aiming to pass elements of Build Back Better that they maintain will help counter inflation concerns in the long run, such as healthcare support and reduced childcare costs. But more immediately, public opinion will rest largely on the ability of Biden and incoming Fed officials to slow inflation, even as post-COVID-19 supply and demand uncertainties linger.

What about Biden’s promise of unifying America?

Biden took office with the aim of healing divisions after the tumultuous 2020 election and the January 6 riot at the Capitol, and to be sure, compared with the Trump years, the rhetoric in Washington has toned down under Biden, with many divisions playing out over policy debates rather than as personal attacks. Nonetheless, uniting the country would have been a difficult task for any president, which Biden has been trying to balance alongside holding his own party together, usually prioritizing the latter, and so far he has struggled on both counts. This was evidenced by the recent battle over voting rights bills; his speech in Atlanta which called on Congress to act on the legislation last week only further alienated Republicans and was brushed off as “too little, too late“ by many in his own party.

While polarization will most likely remain high among the electorate, especially during the election year, there are still options for Biden to pursue bipartisan legislation. The Senate has already passed a China competitiveness bill that is awaiting approval in the House and has the support of both parties to fund research and development, domestic supply chains, and US semiconductor production. And while Democrats’ voting rights bills are likely dead in the Senate, there is increasing bipartisan support to reform the Electoral Count Act (ECA). Proposed changes to the legislation would clarify how Congress counts Electoral College votes, potentially safeguarding future elections and closing loopholes that Trump attempted to exploit.

Biden set out early in his term to re-establish US commitments to multilateralism and global concerns such as climate change and democracy. But his foreign policy record for the first year is still marred by the botched Afghanistan pullout, even as the majority of Americans favored the withdrawal. Indeed, the alternative of keeping US forces in place would likely have resulted in an escalated targeting of American troops and a further continuation of an unwinnable “forever war” in the region. Still, in addition to leaving Afghanistan in a crisis situation, the strategic failure of the withdrawal was a blow to US foreign policy, rattling allies and rallying rivals like Russia and China. 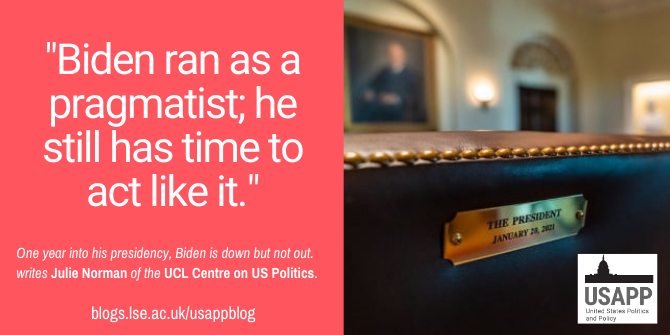 Meanwhile, despite the administration’s aim to focus on China, attention has, by necessity, been diverted to escalating tensions with Russia over Ukraine. The administration in general, and Biden in particular, has rightly engaged in direct diplomacy with Russian officials, in close concert with NATO allies, to try to avert an armed conflict without ceding ground to Russian President Vladimir Putin’s demands. But even absent a military invasion, the situation is raising alarms about the stability of the post-Cold War world order and will likely require ongoing attention in the upcoming year.

Where do Biden and Democrats go from here?

Much could change before November, but it is very likely that Democrats will lose one or both houses of Congress in the midterms. It is typical for the incumbent’s party to lose seats in the midterms, and Democrats don’t have much room to spare. Notwithstanding any unforeseen crises, the size of the shift will depend largely on the key issue of the economy, as well as the pandemic. But much will also depend on Biden, and the extent to which he is willing or able to reset going into his second year, be it through staffing changes, prioritising realistic legislation, and speaking directly to the concerns of working class Americans. Biden ran as a pragmatist; he still has time to act like it.