Nevada is one of the most crucial states in the 2022 midterm elections, with control of the US Senate potentially in the balance depending on the election outcome there. Eldrid Herrington takes a close look at how the primary races are shaping up for both parties in the Silver State, and at how redistricting may affect the state’s US House races.

Nevada is a critical battleground state for US midterm elections in 2022 in a state that is a demographic and political mirror of the United States as a whole. What do we know so far? That all races in the Silver State are extremely close.

Nevada is a battleground state and a bellwether – as noted in a prior post, Nevada’s population mirrors the demographic makeup of the United States and its political outcomes broadly tend to reflect the nation’s. But there have been some important state-wide changes in the past two years and the 2022 elections will be nailbiters. For the first time, most of the electorate in the state identifies as independent rather than Republican or Democrat, possibly demonstrating an impatience, distrust, or disillusion with party politics, or illustrating that voters remain persuadable for the party that hits on the messages that resonate. It is increasingly racially and ethnically diverse, with growing numbers of Hispanic, Latinx and Asian voters in particular.

Mirroring national trends, Democrats have achieved victories by very close margins in the 2016, 2018, and 2020 state races. In 2022, their voters are split between heirs to the recently deceased Harry Reid, powerful and influential majority leader of the US Senate, and the Democratic Socialist adherents of US Senator Bernie Sanders of Vermont, who have captured the Nevada Democratic Party leadership. This change is on the back of relatively strong union membership, particularly in Clark County, the seat of Las Vegas, and particularly through casino and other employees who belong to the Service Employees International Union (SEIU) and the Culinary Union, among others. It remains to be seen how this change in state party leadership will impact on the 2022 midterms.

There are potentially troubling signs for the Democratic party in terms of voter registrations in the state, which have increasingly become nonpartisan or Republican. Nonpartisan (or independent) registrations are now the majority, a fact that some attribute to automatic voter registration and others to disenchantment with party politics. Although Nevada is doing extremely well in terms of leading economic indicators, this may not be the perception of most voters and Democratic incumbents, a majority in the state, face fierce political battles.

The three biggest Senate seats up for grabs in the US in 2022 are in Arizona, Georgia, and Nevada. Senator Catherine Cortez Masto was elected for the first time in 2016 and is running to hold onto her seat. In 2016, Catherine Cortez Masto was elected the first Latina Senator in US history, but this achievement is under threat as the pandemic’s effect on a state heavily dependent on the hospitality and leisure sectors as well as inflation rises and supply chain issues.

Republican primary candidates for US Senate

Cortez Masto’s chief prospective Republican opponents are Sam Brown and Adam Laxalt. Laxalt is grandson of Nevada US Senator Paul Laxalt and son, through an extramarital affair, of New Mexico US Senator Pete Domenici. He was one term Attorney General of Nevada, from 2015-2019, and co-chair of Trump’s unsuccessful Nevada campaign in 2020. He joined Trump in making numerous false allegations of voting fraud in the state. (The Nevada Secretary of State, Barbara Cegavske, is a Republican.) Laxalt has Trump’s endorsement and notable allies in Florida Governor Ron DeSantis, and US Senators Rick Scott, Tom Cotton, and Ted Cruz.

Sam Brown is an Army veteran, West Point graduate and Purple Heart recipient who was badly injured in a 2008 deployment in Afghanistan. He has posted strong poll results and fundraising – much of it grassroots – in the past two quarters. 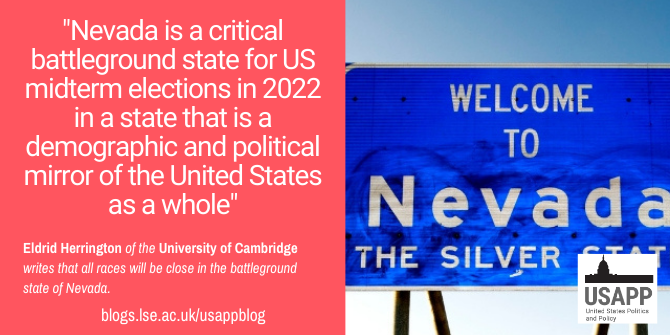 In his quest to become the Republican front runner, Brown has sought to portray Trump-endorsed Laxalt as a weak supporter of the Second Amendment, in a wrangle over gun rights and “red flag” laws (which allow police or family members to petition state court to remove firearms from someone deemed to be dangerous) – this in a state with the worst gun massacre in US history: the 2017 slaughter of 60 people in a concert at Las Vegas and injury of 411 more. Despite this, gun laws remain a potent purity test for Republican candidates.

While Laxalt was Attorney General, his office appointed a commission to study the implementation of gun control measures following the 2018 shooting deaths of 17 and injury of 17 students at the Marjorie Stoneman Douglas High School in Parkland, Florida. The Nevada commission drafted recommendations to reduce the incidence of school shootings.

Brown and others have used these recommendations to portray Laxalt as hypocritical and inconsistent in his positions in respect of “red flag” laws, which the influential National Rifle Association opposes. One of Brown’s prominent supporters and proxies has called Laxalt a “Manchurian candidate”.

Republicans’ positions regarding gun rights may gain them adherents in the primary but their candidate’s success in the general election may be affected by quite differing views of gun rights, especially in a state where most voters are in Clark County and Las Vegas and where voters have personal memories of the 2017 events.

Polls positing a matchup between Cortez Masto and Laxalt place either as a winner in one of the tightest races for the Senate. The closeness of the Senate race in Nevada in 2022 mirrors the close national divide, and all major state-wide races are highly contested. Democratic governor Steve Sisolak is likely to face one of a slate of strong Republican candidates that notably includes former Republican US Senator Dean Heller. A recent poll posits a tie between them in a head to head matchup that lies well within the margin of error.

Redistricting and the US House of Representatives

Democrats currently hold three out of the state’s four congressional seats. On 16 November 2021, the Democrat-controlled Nevada State Assembly redrew the congressional and legislative maps in the state, using data from the controversial 2020 US Census.

These voting maps have incurred Republican ire but also dismay from several Hispanic and Latinx advocacy groups. Latinx votes, representing 29 percent of the state total, and once concentrated in congressional District 1, are now split between three Congressional districts currently held by Democrats.

US Representatives Susie Lee and Steven Horsford, incumbent Democrats who represent the 3rd and 4th Congressional districts, are likely to benefit from the changes. The changes for District 1 have been the most dramatic: instead of having a tight inner-Las Vegas demographic, much of the voting area has been expanded into the suburbs, potentially diluting its Democratic concentration. Dina Titus, US Representative for the 1st Congressional district, faces a much tighter race and has been frank about the fracturing of her inner-city district, which now encompasses extensive suburbs and rural areas to the southeast. In a recent AFL-CIO town hall she reportedly said that “I got totally f***ed by the Legislature on my district”.

One aspect of the redistricting impacts 1 percent of the population but has important consequences chiefly for the 2nd Congressional district in the rural, Republican-held north of the state, currently represented by incumbent Mark Amodei. Nevada is one of 11 states in America that has required that, for the purposes of redistricting, inmates’ addresses remain where they were before they were incarcerated. This ensures that the voting power of the largely white, rural districts where most of the state’s prisons are located, is not augmented through “prison gerrymandering”. Following the 2020 census, data reflecting pre-incarceration addresses was used by Democrats to create district maps, to the fury of Republicans.

Elections in the future

Elections in Nevada may change radically in 2025: a ballot question is likely to be offered in November about moving to open primaries and ranked-choice general elections. Roughly a third of Nevada residents do not belong to a political party and proponents of the measure believe this will engage more voters in the political process at an earlier stage. Opponents cite the costs to the state of implementation. Only Maine and Alaska have any form of rank-choice voting at a state level.