The party of the US president often loses ground in midterm elections. As the midterms in November this year come into focus, Rob Ledger and Peter Finn review three issues that may be key in deciding whether Democrats are able to hold slender majorities in the US House of Representatives and the US Senate: the COVID-19 pandemic, Donald Trump, and the economy.

A fairly consistent feature of the US election cycle is that the party holding the White House tends to lose ground in the midterm House and Senate elections held at the halfway point between presidential elections. In 2010, for instance, following the loss of 63 House seats, President Barack Obama labelled the losses Democrats suffered a ‘shellacking‘. Likewise, almost four years ago, as a prior series we co-curated documented, in the first midterms of Donald Trump’s presidency, Democrats made large gains in the House of Representatives, albeit tempered by Republican gains in the Senate. As we move towards the midterm elections in November, this current series will document the build-up to these elections across key states and by covering key themes, attempting to provide readers — whether occasional, academics, or politicos — with a granular understanding of the US electoral process.

In the coming months, one of the questions driving coverage of US elections will be whether Biden can avoid the midterm losses that have bedevilled so many of his predecessors? Below we sketch out three key interrelated issues that could influence US voters in November: the COVID-19 pandemic, Donald Trump, and the economy.

In the almost two years since the COVID-19 pandemic first made its presence felt on presidential primary season in March 2020, it has driven US politics (as elsewhere),  in innumerable ways; leading to record breaking government spending bills, impacting the logistics of elections, and feeding into broader political polarisation, to name just three impacts.

At some point this Spring the US appears certain to hit the tragic milestone of a million confirmed deaths from COVID-19. When exactly this will be will depend on the speed that the Omicron variant spreads among the vulnerable and unvaccinated scattered across the US, and whether the Biden administration is able to coax (and in some cases mandate) significant numbers of those who have yet to become vaccinated to become so. All other issues aside, it is worth pausing for a moment to note the human tragedy represented by the loss of a million people to COVID-19 in the US. That it should have occurred in the world’s richest nation is as heart wrenching as it is frustrating.

How much of an electoral issue the pandemic will be by November is still obviously hard to say. However, the record breaking case numbers being recorded at present, and the steadily growing death toll, suggests it will, at the very least, be a campaign issue of note, if not quite the defining issue it was in 2020. Indeed, those thinking about where an ‘October Surprise’ (though admittedly this term is generally used with relation to presidential elections) might arise from in 2022 could do worse than reflecting on the COVID-19 pandemic’s ability to drive political events in unexpected ways over the last two years.

Despite a recent detente around vaccinations, with Biden praising the Trump administration initiative that drove vaccine development, there is clearly still no love lost between a Trump-infused Republican Party and the Democratic Party led by Biden, House Speaker Nancy Pelosi, and Senate Majority Leader Chuck Schumer.

More concerningly, the new year has seen a raft of predictions that, reflecting the Capitol insurrection of January 6th, 2021, the US body-politic is in mortal danger, with Trump often held up as a particularly concerning symptom rather than a cause. Professor Thomas Homer Dixon of the University of Waterloo, for example, has argued ‘American democracy could collapse’, claiming that by ‘2030, if not sooner, the country could be governed by a right-wing dictatorship.’ Likewise, Harvard University Professor, Laurence H Tribe posits that the US ‘and the legal and political institutions that prevent it from descending into despotism, are in even greater peril today than they were at the time’ of the 2020 presidential election. Finally, in a new book, journalist Stephen Marche explores various scenarios that could trigger a US civil war. 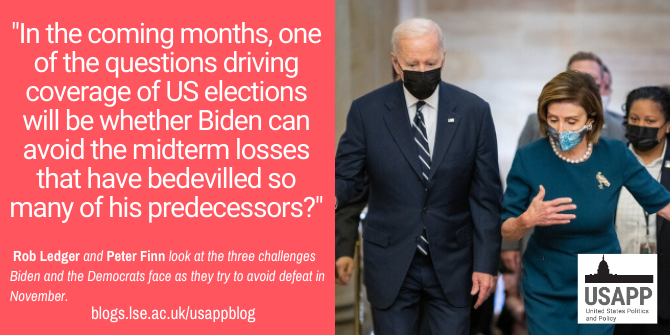 Whilst Trump will not be up for election in November, he appears likely to play an outsized role in deciding the type of candidates selected during Republican primaries. As such, though he may not quite dominate the midterms in the manner he did in 2018, he, and the reverence and revulsion he inspires, will clearly be a factor. Moreover, if the concerns of Dixon, Tribe, and Marche are borne out, the midterms could be part of a depressingly consequential historical arch.

Is it Still the Economy, Stupid?

US politics, as with so many other Western democracies, has lurched ever further into culture and identity issues and away from the previous economy-focused orthodoxy of the 1990s. Nevertheless, the economy could prove crucial in the midterms, both to boost Republican chances or provide a slight advantage to Democrats (or at least limit losses).

An issue likely to loom large ahead of the midterms is inflation, which increased to 6.8 percent last year, it’s highest level in almost 40 years. Although this is partly a result of supply chain problems, Republicans have already framed a narrative that Democrats cannot be trusted with the economy and the Biden administration’s stimulus package has overheated the economy—analysis shared by even more sober commentators—and led to price rises. In a move typical of Republican lawmakers in opposition, the party has also rediscovered its interest in running tighter budget deficits, engaging in the kind of small state fiscal conservatism favoured by more traditional GOP supporters.

The administration’s economic policy could also have real-world implications that may damage Democrats’ chances at the midterms, for instance the ending of federal assistance programs. The Federal Reserve is unlikely to be helpful either as it raises interest rates in an attempt to dampen inflation. Meanwhile, Senate Democrats’ failure to pass the much-vaunted ‘Build Back Better’ social infrastructure bill, including major spending on the green agenda, will add extra weight, if any was needed, to arguments claiming Washington is dysfunctional and pouring cold water on Joe Biden’s campaign pledges he could work effectively with Congress.

Nevertheless, it is not all necessarily bad economic news for Biden. The US economy’s recovery appears to be sustained and this could continue well into 2022. Unemployment has fallen over the last few months and some analysts even talk of ‘full employment’ being achieved this year. Similarly, supply chain problems appear to be abating and inflation could well fall as the year continues. Rather than being on the defensive, Democrats could potentially have a story to tell about the positive impact of the stimulus bills of 2021. And if the pandemic is as good as over by November, with the related boost to consumer confidence and economic activity, the economic picture might not be a particular weakness for the Democrats in the midterms.

In 2020 Biden ran, to a large degree, as a steady hand who could harness his knowledge of the workings of the US government gleaned from decades in the Senate and two terms as Vice President to control the COVID-19 pandemic. There were important successes in this regard, such as a quick ramping up of the vaccine program to the extent that by April it was common for three million vaccinations to be delivered daily. Yet, by August this pace had slowed, with most days seeing significantly less than a million shots delivered.

Polarisation, regardless of whether Trump is symptom or cause, and anti-vaccine sentiments that are preventing many from getting vaccinated pre-date Biden’s administration, but the failure to convince many to get vaccinated (a common theme across many countries) could cause the pandemic to impact economic activity this year.

All being equal, at this point it appears likely the Republicans will take control of both houses of Congress in November. The ability of the Democrats to avoid a now traditional midterm shellacking will, in large part, likely rest on their ability to deal with the COVID-19 pandemic, the troubling anti-democratic instincts that Trump represents, and economic challenges.