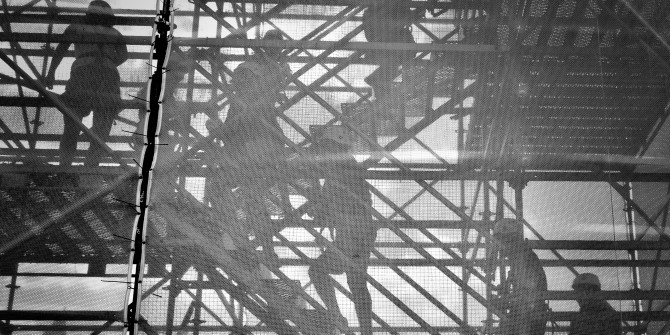 The labour share, the proportion of the national income paid to workers, has been falling globally since the 1980s, as illustrated in figure 1. This implies that the benefits of growth are not shared equally between workers and capital owners. This is a particularly worrying phenomenon in the presence of increasing wage inequalities, as it implies that the average worker’s share of national income has become lower over time. Our study shows that capital heterogeneity plays a crucial role in driving labour share dynamics. 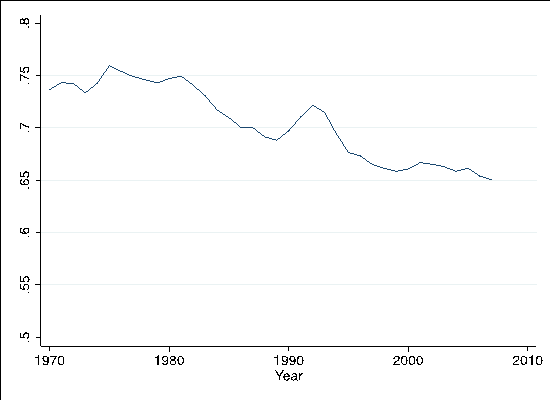 The literature to date provides alternative explanations. Globalisation, market regulations, market concentration and technical change have been considered responsible for the downward trend in the labour share. In these findings the notion of ‘capital’ plays a central role but the definition of capital generally refers to a total capital measure, without accounting for the possibility that different types of assets can drive the labour share in opposing directions. In contrast, research at the company level observes that production is increasingly relying on a variety of intangible assets—those that are not physical, some traditional examples being goodwill and patents (Perugini et al. 2017). Analysing the role of intangibles on the distribution of income is therefore crucial to understand why the labour share has been declining for over 30 years.

Recent technologies have been increasingly capital-using, leading to more capital-intensive production activities. This trend has been facilitated by a decrease in the price of capital goods, leading to higher substitution of labour with capital (Bentolila and Saint-Paul 2003, Karabarbounis and Neiman 2014). Investments in information and communication technologies (ICT), automation and artificial intelligence are gradually replacing tasks previously performed by workers (Acemoglu and Restrepo 2017, Aghion et al. 2017), changing the structure of the workplace and further reducing the demand for workers, particularly those with low skills.

Over time, the concept of capital has become more complex. Considering an aggregate measure prevents the correct identification of complementarities and substitution effects between capital and labour. Following the work of Corrado, Hulten and Sichel (2009) our analysis uses data on three types of intangible assets: computerised information, innovative property and economic competencies.

Computerised information coincides with computer software. Innovative property refers to the innovative activity built on a scientific base of knowledge as measured not only by conventional R&D statistics but also by innovation and new products and processes more broadly defined, including new architectural and engineering design, mineral exploration and new products development costs in the financial industry. Economic competencies include spending on strategic planning, worker training, redesigning or reconfiguring existing products in existing markets, investment to retain or gain market share and investment in brand development.

Our analysis investigates the effects that these different types of assets have on the labour share, next to a more traditional concept of capital and a measure of technical change, which captures the additional effect of technical advances beyond that embedded in new capital assets. In addition, we recognise substitution/complementary effects do not only depend on the type of capital but also on the type of labour. Therefore, we analyse movements in the total labour share and in the labour share for high-skilled and lower skilled workers. Figure 2 presents the main results of our analysis, which can be summarised as follows:

Overall, our results show that low skilled workers are increasingly suffering the negative consequences of technical change and of the development of new types of capital assets in the latest innovative wave. 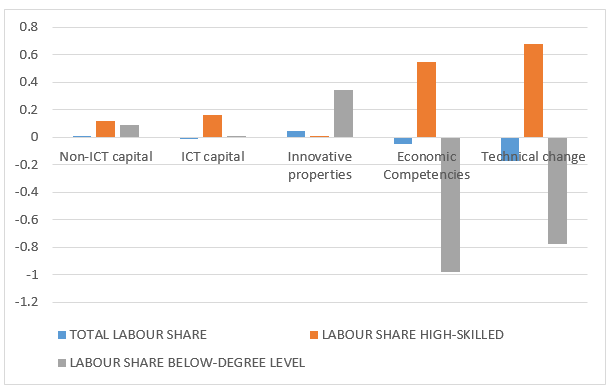 Our work also addresses the question of whether market regulations, such as employment protection legislations, affect the labour share. By comparing labour share figures in different countries and industries, we observe that the declining trend is pervasive, despite the presence of very different regulatory regimes. This result suggests that institutional factors cannot be considered responsible for the decline in the labour share. This implies that technological factors, such as accumulation of new forms of capital assets, rather than institutions, are likely to be the main drivers of long-run labour share movements.

Future research should further extend the analysis of substitution/complementary effects, using data with more information on the different types of skills/occupations and different tasks within occupations. In fact, several jobs require a multitude of tasks and not all of them are easily replaced by technology. The ability of performing different tasks becomes crucial to decrease workers’ displacement, prevent unemployment spells and wage cuts, and reverse the decline of the labour share, leading to an improvement of workers’ welfare.

Mary O’Mahony is Professor of Applied Economics at King’s College London. Her research interests are in the areas of productivity, growth and human capital. She has published widely in academic journals and has coordinated several research projects, mostly financed by the European Commission. She is currently principal investigator in the KCL contribution to the Economic Statistics Centre of Excellence.

Michela Vecchi is Associate Professor of Economics at Middlesex University Business School and research fellow at NIESR. Her research focuses on the impact of innovation on productivity, skills and the labour market. She is member of the editorial board of the Review of Economics and Institutions. She has contributed to several research projects funded by the ESRC, the European Commission and the Department for Business Innovations and Skills (BIS).

Francesco Venturini is Associate Professor of Economics at the University of Perugia (Italy) and research fellow at NIESR (UK). His current research deals with institutional and policy factors enabling innovation and how the latter affects economic growth and inequality.  Francesco is Managing Editor of the Review of Economics and Institutions. He also participated to several research projects for various EC departments (EPKE, EUKLEMS, Jean Monnet, ECR) and currently he serves as a member of the Ifo-World Economic Survey expert group (Germany). 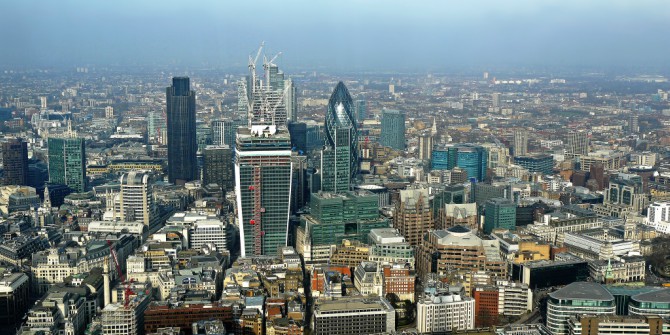 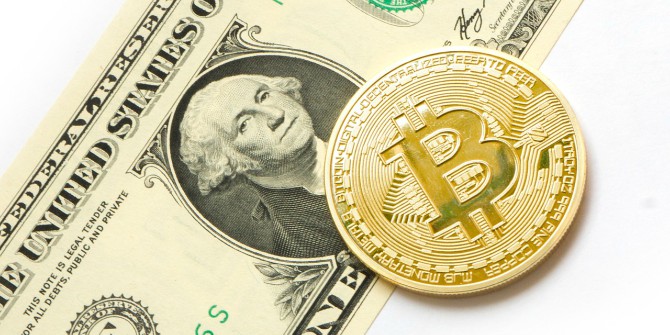