William Beveridge was Director of LSE 1919-1937. In 1926 he also became Vice Chancellor of the University of London. LSE Archivist Sue Donnelly finds out how LSE commissioned artist William Nicholson to paint a portrait of Beveridge to mark the occasion.

On 25 June 1926 LSE Director, William Beveridge was elected to the position of Vice Chancellor of the University of London. In the following two years Beveridge was active in bringing to fruition plans for central site for the university in Bloomsbury. In May 1927 the site of Senate House was purchased from the Duke of Bedford for £550,000.

At LSE the election was marked by the decision to commission a portrait of Beveridge in his Vice Chancellor’s robes for the new Founder’s Room (Shaw Library) to be opened in 1928. In November 1926 a committee was set up to oversee the commission. Members included the economic historian Eileen Power and student representatives. The Treasurer was Professor H C Gutteridge, Cassell Professor of Industrial and Commercial Law and the young economics lecturer, Lionel Robbins, was secretary.

The portrait was funded by a public subscription so the committee sent out letters to many people who had worked with Beveridge during his civil service and LSE careers. The subscribers included the statistician, Josiah Stamp who became chairman of the Court of Governors in 1935 and Edward Pease the former secretary of the Fabian Society.

On 27 January 1927 the committee met to discuss the selection of an artist. And the decision was made to commission the fashionable portrait painter William Nicholson (1872-1949). No reason was given for Nicholson’s selection but his previous commissions included A C Benson, Master of Magdalen College, Oxford, and J M Barrie, the author of Peter Pan.

The committee met the artist in February when he also had tea with the Director.  The School files and Beveridge papers give no details on the arrangements for painting the portrait but Beveridge was depicted in his Vice Chancellor’s robes and the portrait was completed by June when the committee were invited to view the completed portrait at Nicholson’s studio in Apple Tree Yard. Nicholson received £278 for the painting which was presented to Beveridge on Oration Day 1927.

Beveridge did keep in touch with Nicholson and invited him to dinner in May 1930 – unfortunately the dates had to be changed and it is unclear whether Nicholson attended. (Beveridge/2B/23/3)

Today Beveridge’s portrait hangs in the Shaw Library with those of other LSE Directors.

Posted In: Art on campus | Beveridge 2.0 | People | Running the School 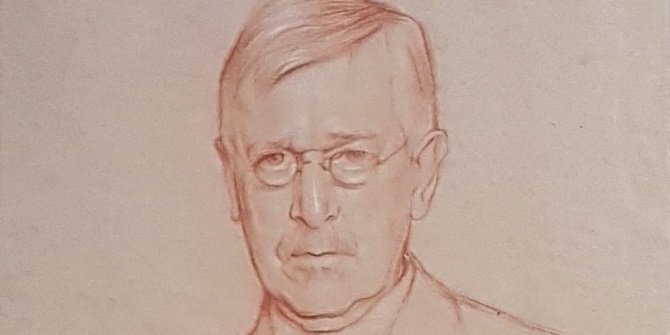 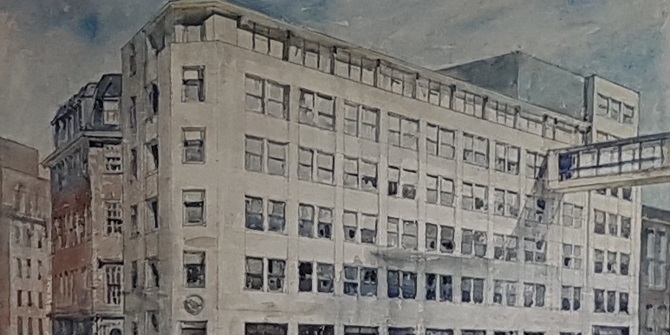