Discover the world of RAF “Gang Shows” during the Second World War at LSE, Houghton Street, as told by historian Philippa Brownsword.

During the Second World War, when LSE had evacuated to Cambridge, the Houghton Street premises were occupied by various branches of the Air Ministry. One section based here was the newly-formed Department of Air Force Welfare, which was concerned with all non-combatant aspects of service life. Attached to Welfare were the official RAF Entertainment Units, known as “Gang Shows”.

The British armed forces took entertainment very seriously. They recognised that large numbers of men, posted far away from home and exposed to serious danger and often miserable conditions, needed to be kept occupied and amused when off-duty. Whilst ENSA (Entertainments National Service Association) was sending civilian artistes to the front line, the services each also had their own official concert parties. In the RAF, these were under the supervision of Ralph Reader, impresario of the Boy Scout Gang Shows in the 1930s. Born in Somerset, he had travelled to America in his twenties and worked as a singer, dancer and choreographer on Broadway, and on his return to the UK became instrumental in producing the popular variety shows given by massed groups of Scouts.

The idea for the RAF Shows came from a conversation between Reader, then in RAF Intelligence, and a friend, Air Commodore Archie Boyle, who told him of his concerns about welfare on RAF stations, especially those in remote areas. Boyle thought that a group of entertainers visiting the bases could have a dual function – to boost morale and also report back on any developing discontent. In 1939 he first asked Reader to put together some men and produce a show to tour. Reader decided to enlist the help of some former Scout Gang Show performers, but he insisted that they be serving in the Air Force (some of them had to be hurriedly called up), to ensure they were distinct from the civilian ENSA parties already doing the rounds. Rehearsals and performances took place in the Old Theatre on Houghton Street.

The RAF shows proved themselves to be first-rate entertainments. In a world before television, and when mail to those serving overseas could take weeks or even months to arrive, it’s hard to overstate the importance of an evening out at the theatre or cinema to these men. Welfare therefore set about increasing the number of its touring shows by seeking out talent amongst the lower ranks of the Force.

Reader and his team were only allowed to recruit men who weren’t aircrew and who didn’t have particular expertise in engineering, or any other skills vital to the war effort. Their advertisements in RAF magazines and on bases were explicit, however: experience in show business was essential.

By 1944 Gang Shows had travelled throughout the UK, Italy, North Africa, and the Far East. There was an emphasis on visiting the remotest outposts possible, many of which received no other forms of live entertainment, and where the conditions precluded ENSA from sending civilians. (At least, this was the theory; by 1944 ENSA parties were also following close behind the troops on the front line, and Britain’s best-known wartime entertainer, Vera Lynn, had travelled all the way to Burma, where she insisted on experiencing at first-hand the hardships of the tropics and the jungle.)

Life for the performers wasn’t exactly dangerous, but it could be quite challenging. Gang Show no.1 travelled to France in July 1944, just six weeks after D-Day. This party included Dick Emery. They were followed in mid-August by GS5, with “Cardew” (real name Douglas) Robinson, and accompanied by Reader. They were accidentally shot at by a passing friendly aircraft during their performance, causing Robinson to improvise: “We’re not that bad, are we??”

One well-known name who served in the Gang Shows was the actor Peter Sellers. He can be seen, aged 19, fourth from the right in the picture below, taken in the Old Theatre before the party left for a nine-month tour of India and Burma. 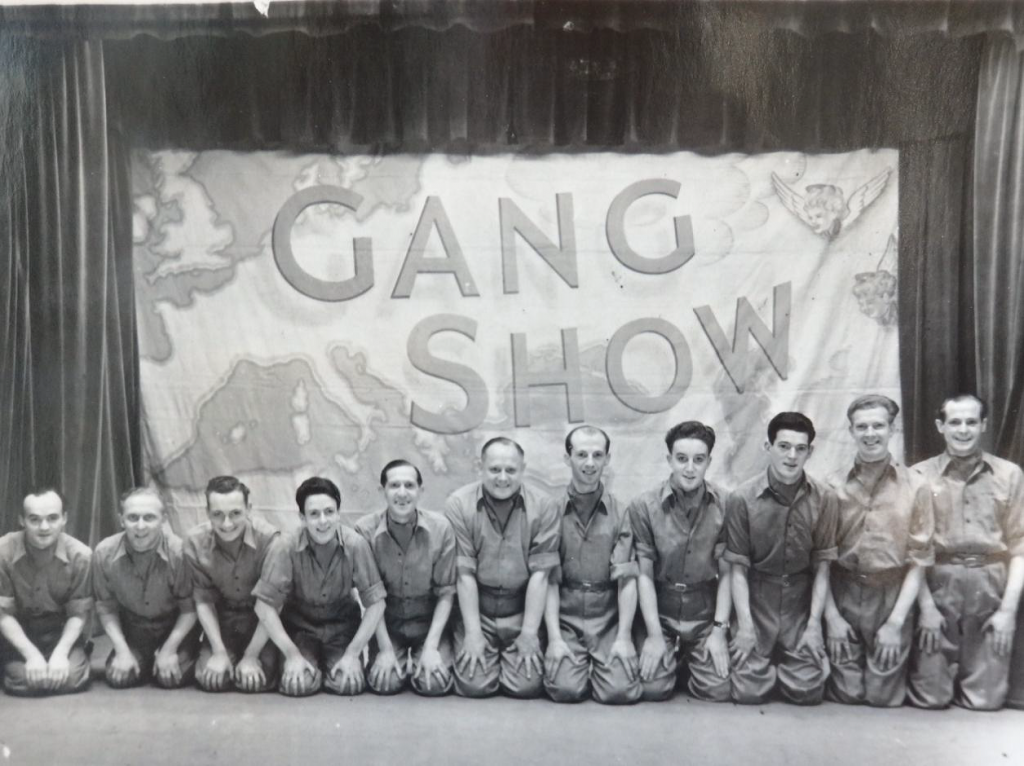