The writer, polemicist and vegetarian G Bernard Shaw is the best known of the School’s founding group, writes LSE Archivist Sue Donnelly. He is the only LSE person to have won both the Nobel Prize for Literature and an Oscar – for his screen play for Pygmalion. But how important was Shaw in the founding of LSE?

G Bernard Shaw first met Sidney Webb in 1879 at a meeting of the debating group the Zetetical Society. Together they went on to be leading members of the Fabian Society after its formation in 1884, both authoring many Fabian Tracts. Their friendship was to last over 60 years with Shaw writing in 1949:

Quite the wisest thing I ever did was to force my friendship on him and to keep it; for from that time I was not merely a futile Shaw, but a committee of Webb and Shaw.

On 4 August 1894 Shaw cycled over to Borough Farm, Godalming, from Tilford and was present when Sidney Webb began a discussion over breakfast into making the most effective use of a bequest from the Derby solicitor, Henry Hunt Hutchinson. Beatrice Webb noted in her diary his plan was “to found a School in London along the lines of the Ecole Libre des Sciences Politiques in Paris”. Though others, possibly Shaw, suggested using the money to make a grand political gesture such as funding all the Fabian Society Executive Committee to stand for Parliament, Webb was firm in his determination to use the money to create a more permanent legacy.

Correspondence between Shaw and the Webbs indicates that Shaw was not immediately drawn to Sidney Webb’s proposal. Shaw believed that Hutchinson had “left his money for Red propaganda by Red vans” and would have preferred using the money to enliven Fabian campaigns. Despite this he did act as Sidney Webb’s spokesperson on the Fabian Society Executive Committee, managing to avoid antagonising Sidney Olivier and Hubert Bland who both objected to Sidney Webb’s proposal.

Sidney Webb suggested giving some of the money to the Fabian Society to fund a programme of lectures and speeches around the country. Shaw wrote to Beatrice Webb warning that Sidney was in danger of alienating the Fabian Society Executive Committee by appearing to bribe them to accept his proposals and allow Sidney “to commit an atrocious malversation of the rest of the bequest”. Shaw later admitted “Sidney Webb performed miracles with his money which I should never have done”.

Unlike the other three LSE founders Shaw never had any day to day involvement in the School, though he gave at least one public lecture on the Norwegian dramatist Henrik Ibsen. In 1896 Shaw was introduced to the Irish heiress, Charlotte Payne-Townshend, when they both stayed with the Webbs in Suffolk. They married in 1898 and set up home in Charlotte’s flat at 10 Adelphi Terrace, over the School. Beatrice Webb’s diary, 30 October 1899 says:

The Shaws have taken up their residence in Charlotte’s attractive flat over the School of Economics, and Sidney and I meet there on Thursdays to dine sumptuously between our lectures. Charlotte and Shaw have settled down into the most devoted married couple, she gentle and refined, with happiness added thereto, and he is showing no sign of breaking lose from her dominion. What the intellectual product of the marriage will be I do not feel so sure: at any rate he will not become a dilletante, the habit of work is too deeply engrained. It is interesting to watch his fitful struggles out of the social complacency natural to an environment of charm and plenty. How can atmosphere be resisted?

Shaw outlived Sidney and Beatrice Webb, Graham Wallas, Charlotte and the first Director, William Hewins. He died on 2 November 1950 at the age of 94 from injuries incurred in pruning a tree. His ashes were mingled with those of Charlotte Shaw and scattered along the footpaths of their home Shaw’s Corner in Ayot St Lawrence.

Find out more about our anniversary: Celebrating 125 years of LSE 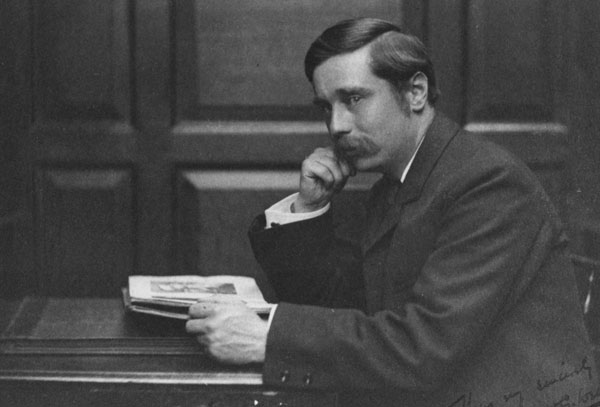