Detained Without Cause is a collection of oral history accounts by six New York based Muslim immigrants who were incarcerated following 9/11. None of these men had any connection to terrorism, and yet as their stories reveal, they were presumed guilty by the arresting officers, the FBI, the court system, the media and their communities. They were held without trial for several years in solitary confinement, in maximum security facilities where their human rights were systematically violated before being deported on trumped up immigration charges. Rory Creedon finds an important book with policy implications relevant far beyond the borders of the US.

Detained Without Cause: Muslims’ Stories of Detention and Deportation in America after 9/11. Irum Shiekh. Palgrave Macmillan. March 2011. 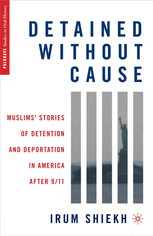 Based on extensive personal interviews conducted by Irum Shiekh, a Visiting Scholar of Asian American Studies at UCLA and a Fulbright scholar at Birzeit University in Palestine, this book aims to dismantle the fabricated link between the six detainees and terrorism in order to show that the government was using detentions to placate a fearful public. In doing so she not only outlines the wide ranging consequences for the victims of the abuse of state power, but also demonstrates how futile such abuses are in advancing national security. This then is what might be termed “activist history” as Shiek gives voice to those who had none. The powerful and tragic accounts that emerge should serve as valuable counterfoils to calls for greater state powers in fighting the war on terror.

The six narratives are diverse in their details and contexts, but they are remarkable also in their similarity. Each man tells of their time in the USA prior to detention as one of opportunity and freedom, and how they fully subscribed to the system of rights they had not been able to enjoy in their home countries. That system of rights was totally suspended for them after 9/11. Having been detained, Mohammed Azmath was not permitted to see a lawyer until he had already been in prison for 92 days. He was left in solitary confinement for over a year when the average human being becomes suicidal after only 30 days in such conditions. All men report that a spectacle was made of their arrest; presumably to assuage, or play up to, fears in the local communities. There was consistent abuse of procedure: searches without warrants, a failure to advise of rights, fabrication of evidence. In one particularly disturbing case US officials explicitly contravened the law in disclosing details of Mohammed E’s asylum application to Egyptian authorities upon his return, in full knowledge that the application contained false information about a non-existent link between him and a terror network called Al-Jihad. This lead to Mohammed being subjected to extreme physical torture at the hands of the Egyptian secret police.

The picture that emerges is one of an out of control state. 1,182 “Special Interest Cases” were rounded up in the immediate aftermath of 9/11. The vast majority of them were Muslims from the New York area. Given that the 9/11 hijackers had planned the attack from the West Coast, and were from Saudi Arabia, and the fact that the majority of men arrested were Pakistanis based in New York, points to the inevitable conclusion that these arrests were made pursuant to racial profiling rather than genuine threat. The narratives show that every level of state from police, FBI, judges, guards and even the media, were complicit in assuming guilt based on nothing more than the origin of these men. None of the cases in question resulted in prosecution under terrorism charges.

The book is not without its faults. The introductory chapter in which Shiek attempts to place the detentions within a broader historical pattern of US scapegoating of immigrants is rather light in detail. Further examination of the history of Muslim immigration to the US would have both strengthened her case, and also provided the reader with a more nuanced background to the issue at hand. Additionally some may take issue with the way the narratives are presented: rather than edited transcriptions, the interviews and diverse other sources are amalgamated into a single first person narrative. Thus there is no attempt at impartiality, this decision having been taken directly in order to allow the reader to “empathize with the detainees”. Stylistically this makes the book an extremely compelling read, but this is so at the expense of a sense that this is orthodox historical research. On the other hand this method is used explicitly to place the work within the field of oral history. Perhaps the most important justification for the approach is that when presenting the stories of these defenseless detainees, any reference to “national security”, no matter how patently ill-conceived, would prejudice the power of the narratives simply through the vast power imbalance that exists between the detainees and the state.

This is an important book that shows the human cost of the detention policies that occurred post-9/11. The important implications it makes for policy are relevant far beyond the borders of the US. In a post-catastrophe environment, it is perhaps natural that those left behind seek people to blame. In order to prevent that tendency from translating into widespread abuse of the individual, a strong and inviolable system of rights is needed to prevent the different levels of state from colluding to restrict liberties. In the UK context we should be asking what exactly David Cameron means when he tells the European Court of Human Rights that it should only be prosecuting the most important cases? Would the men in this book have constituted such cases? Whilst this book may not persuade everyone that state power needs to reigned in, or subjected to the canon of individual rights, it will at least confront national security hawks with the full consequences of the policies pursued.

Rory Creedon graduated from King’s College London with a degree in law. He then moved into investment banking where he worked raising capital for companies listed on the London Stock Exchange. In 2009 he moved to Mexico to learn Spanish and spent three months visiting the remaining Indian peoples deep inside the BOSAWAS rainforest of Nicaragua before returning to London to enrol in the MPA programme at the LSE. He is particularly interested in trade issues, particularly market access for developing world products. Read reviews by Rory.

Posted In: Africa and the Middle East | Contributions from LSE Alumni | Law and Human Rights | Politics | USA and Canada