Europe’s Angry Muslims traces the routes, expectations and destinies of immigrant parents and the plight of their children, transporting the reader from the immigrants’ ancestral villages to their strange new-fangled enclaves in Europe. Cheryl Brumley finds that in the crowded world of terrorism literature, Leiken’s book especially stands out for focussing on individual tales of Europe’s second generation Muslim migrants.

The back-to-back houses in Beeston Hill, Leeds convey living at its most basic: the interiors are dark and cramped, and a resident’s only exit is dependent on whether they live in the house facing the street or the house to back, the latter of which overlooks a diminutive concrete yard. Originally a hasty build for Irish immigrant families, Beeston’s back-to-backs still stand despite several attempts to halt their construction in the Victorian era, when they were declared “unfit for human habitation”. George Orwell once described the domestic set-up as “appalling” and a place that did little to “encourage self-respect” (p. 120-22).

Five thousand miles away in Mirpur, Pakistan, empty palatial homes line rows and rows of streets. The houses gradually grow in height; a virtual one-upmanship to the grandeur of the previous. The homes of Mirpur are mostly void of furniture and play host to residents only a handful of days a year when many of Beeston’s Mirpuri population drop in for the occasional holiday, wedding or funeral. In the case of the Mirpuri abroad, the recognition of relatives and the neighbours-left-behind trumps their day-to-day existence in England. “Remittances build houses and reputations; they carve out a new social hierarchy where England’s hard-working drudge becomes king for a day” (p. 120).

Written by American intellectual Robert S. Leiken, a self-described “connoisseur of slums” named so for his time spent in Mexico as a revolutionary organiser, Europe’s Angry Muslims focuses its attention on immigration as the key to understanding Europe’s growing Islamist problem. The book is not of course about all Muslims, nor is it an examination of Islam’s overall compatibility with European secularism, despite its cover, featuring two veiled French females appearing vaguely angry. The main subject of analysis is the “marginal man” who lives figuratively and physically between places like Beeston and Mirpur, between the alienation felt in his country of upbringing and the expectations of his parents and the “sender village”. This marginal man is Khaled Kelkal, an Algerian-born and Lyon-raised migrant who planted a bomb in a Paris metro station in 1995, killing eight. This marginal man is also Mohammed Sidique Khan, a Pakistani-British teaching assistant and member of Beeston’s Mullah Crew, the recognised leader of the 2005 London transport bombings. And he is also Cüneyt Ciftci, a German ethnic Turk who detonated a bomb near a government building in Afghanistan in 2008, killing himself and four others. Whether in the banlieues, Beeston, or rural Bavaria, for Leiken the marginal man harbours several binary tensions and his resulting alienation from the worlds he lives between ultimately finds vocation in violence.

The opening chapters focus on domestic terrorist Khaled Kelkal, who is portrayed as a victim of France’s assimilation policies. This material on France is by no means the starring feature of the book, but it is nevertheless fascinating for its detail on a country that many see as having completely misread a problem of socioeconomics for that of religious incompatibility. France does not have an organised terrorist cohort the scale of what Leiken terms “Londonistan”, and the riots which first burgeoned in 2005 throughout France had no characteristic element of Islamism, despite the portrayal of such by the French and international press. Leiken argues that it is the physical alienation felt through the ghettoisation of France’s working class that is more likely to be the underlying cause of rioting, or even Islamic radicalism. The author’s inclusion of first-hand interviews with Kelkal prior to his descent into Islamism reveal an unactualised life, made worse by racist targeting throughout his schooling. In the end, the reader wants a different future for Kelkal, not to excuse his actions, but only as a recognition that his story is all too commonplace in a country which struggles to get it right in regards to immigration policy.

Much attention is paid to the idea of “Londonistan” and the radicalisation of mosques in Britain. Sidique Khan is a unique case study, though the exact details of his radicalisation will probably never come to light. The Beeston/Mirpur contrast to show Mirpur’s houses as a sign of rootedness elsewhere is an extremely evocative image, upon which much of the book hinges.

Leiken also includes a controversial chapter on the negative effects of cousin marriages on Britain’s Pakistani community, but only as a means to set-up Sidique Khan as a rebel who rejected his parents’ traditionalism. The case can be made that cousin marriages may have the effect of “sealing off” the British Muslim society from the rest of the country, as argued primarily by Stanley Kurtz (p. 150), but Leiken shows this holds no causal linkage to terrorism. Sidique Khan actually rejected the practice despite several family interventions, and instead married Hasina Patel, an Indian Muslim woman whom he fell in love with at university. Despite his “newfound godliness”, the Islam that Sidique Khan came to follow after his troubled teenage years was not the Islam of his parents. Radical Salafism gave him answers because it allowed him to be “free, pious but autonomous” (p. 204).

The book has some weak points. One cannot help but notice the references are overwhelmingly from Western sources. To discuss Paris and the banlieues without Gilles Kepel would be an unfortunate oversight, and Islamic fundamentalism without a word from Olivier Roy would be also, but the ushering in of Samuel Huntington in the latter parts of the book unfortunately mars an otherwise convincing thesis. Leiken credits the academic in his acknowledgements, saying Clash of Civilizations had been unfairly “reduced to a shibboleth”. If Leiken is so careful not to present European terrorism as a monolith, it is undone by the references to Huntington. Leiken quotes him without the usual reservations of a contemporary Islamist specialist and does not qualify this inclusion with an explanation. Additionally, many may find the singling out of British leftist “mutliculturalism” as a contribution to extremism, ignoring its evolution in a country of increasing heterogeneity, unfair and unfounded.

But ultimately, Leiken finds that real lessons lie in detail rather than in parallel. Leiken champions the case study, the only thing for him that can offer a nuanced understanding of the history of each case, and the following counter-terrorism policies. He asks that governments and policy-makers come to appreciate the diversity in each country and in each constituency, especially the varying degrees of Islam followed by varying types of Islamic communities. Despite a seeming over-reliance on certain canons of the literature, his footnotes attest to a book that is both well-researched and which has plenty more to add to the subject.

When it comes to the overcrowded world of books on terror aimed at the general reader, there is not a gap that needs filling. There are only those books that stand out and those that do not. Leiken’s book is undoubtedly one of the former.

Cheryl Brumley is assistant editor of the LSE Review of Books blog. Cheryl joined the LSE PPG in January 2012 after graduating from the LSE with an MSc in Theory and History of International Relations with a focus on political Islam. Cheryl previously conducted research into social media and the Arab Spring at the Regional Centre for Conflict Prevention in Jordan, and researched for BBC World Service radio and BBC Global News. Read more reviews by Cheryl. 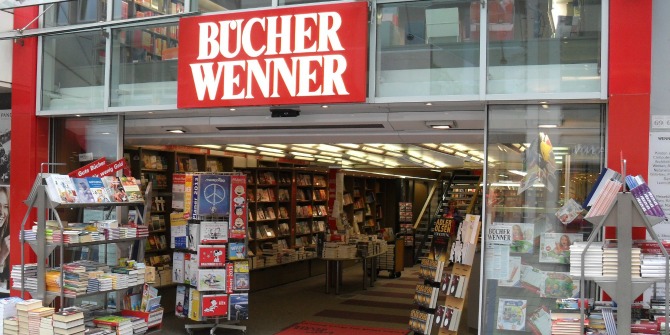 The best bookshops in Osnabrück and Münster, Germany