War and Embodied Memory describes how an amputee and war-wounded community was created after a decade long conflict in Sierra Leone. Beginning with a general socio-cultural and historical analysis of what is understood by impairment and disability, it also aims to explain how disability was politically created both during the conflict and post-conflict, as violence became part of the everyday. Though the book covers vast intellectual ground, it remains compelling and persuasive throughout and effectively contributes essential ideas to studies of disability, post-conflict reconstruction, poverty and anthropology, concludes Kristen Perrin.

Images invoked when thinking of Sierra Leone are often those associated with the bloody civil war that lasted from 1991 to 2002. This was a conflict that became characterised in the western media by images of amputees and pictures of children holding guns, with the guilty verdict in the trial of Liberian former leader Charles Taylor being announced in April of last year bringing a resurgence of attention to the atrocities committed there. While stories of this conflict may have faded to make room for new images of new conflicts, Maria Berghs brings much needed dimensions to understanding Sierra Leone. Her book War and Embodied Memory: Becoming Disabled in Sierra Leone sits among post-conflict discussions saturated with work on memory and reconciliation that ignore the myriad of issues a country like Sierra Leone still faces with regard to the impact physical aspects of conflict can have on communities.

Her extensive fieldwork in Sierra Leone allows Berghs to provide a compelling and well-rounded approach to conceptualising disability. Preconceptions of the conflict are immediately shed by the reader when Berghs recounts an interview with the frustrated chairman of the Amputee and War-Wounded Association (AWWA), a man whom she explains has dealt with countless outside organisations trying to help. He implores her to, ‘Ask us how we survive.’

These words are excellently placed at the beginning of the book, stirring within the reader the implications of what is at stake in such a complex topic. Post-conflict reconstruction and reconciliation is a vast and popular subject in academia, in which this simple but essential concept is often side-lined by what scholars deem to be larger, more profound ideas. Burghs takes this seriously, and sets out her study to examine disability in Sierra Leone not just as a remnant of conflict, but in the wider context of what it means to be disabled in Sierra Leone in a social, political, economic and historical sense. She delves deep into what the treatment and discourse surrounding the Sierra Leonean disabled means for their survival.

Berghs takes a fascinating look at the political background of the creation of disability in Sierra Leone, within the cultural and historical constructions of violence as embedded within a reality of ‘everydayness’. Beginning with Sierra Leone’s post-colonial history, she draws parallels between British colonial rule in the area (ending in 1961) and the rooting of violence in the everyday that enabled patterns of a similar type to become normalised. These patterns would come to encompass the political campaigns of amputation that grew to characterise the conflict.

The author does well to ensure that the nature of the conflict is explained beyond these campaigns of amputation, stressing that this occurred alongside other horrific forms of violence that had widespread consequences. She then explores the symbolic history of amputation, highlighting its role in punishment for theft and significance in battle. Ideas of amputation symbolising government are particularly compelling, as this idea of ‘theft’ is replicated on various levels. Beginning with understandings of governments being corrupt thieves, Berghs states that, ‘by noting ‘theft’ through amputation, you are also symbolically attacking the honour of a political system by shaming it and inscribing it on the body’ (p 75).

But it is the categorisation and defining of the disabled and war-wounded by supra-state actors such as INGOs that supports Berghs initial discussions of the embedding of violence in the everyday through the post-colonial legacy so convincingly. In discussing the roles of outside organisations in creating the identities of the disabled (in a system rife with hierarchy and selective aid), Berghs reveals a group of supra-state actors morally compelled to bring out the voices of the victims not directly, but through the organisations’ own selective mouthpieces. She states that this ‘indicates that a new form of violence is being done’ (p 83). This makes the comment from the AWWA chair at the beginning resonate even more strongly – ‘Ask us how we survive’ indicates that this loss of voice pervades all encounters between those who are disabled and those imposing from the outside, and offers the possibility that this new form of violence is still at work when it comes Sierra Leonean survival. Berghs expertly explores this concept of survival from various angles throughout the book, looking from community aspects of survival to individual issues associated with it.

It is notable that she stays away from ‘victim’ terminology, instead using ‘disabled’ or ‘those with impairment.’ This may seem a basic and logical gesture, but it is important to note that a wide array of post-conflict literature, while careful with terminology, willingly contributes to categorisation that Berghs’ research reveals as causing harm. She deals with these ideas in-depth, most notably when looking at the Truth and Reconciliation Commission and Special Court set up in Sierra Leone. She notes the fact that classification of ‘victim’ in a court setting was linked to physical impairment, the latter often serving as visual evidence to verify this victimhood (those testifying were often asked to show their amputated limb to the court). This led to ‘a medicalised understanding of the body to show truth.’ This demonstrates that regardless of the changing nature of identities, those giving evidence were rooted in the events that impaired them, with the organisations promoting justice tying their identities to the states of their bodies.

The depth and scope of Berghs’ research and analysis cannot be given justice in this single review. Her contribution to this subject expertly moves from straightforward event recounting to complex analyses of the intricate philosophies involved in tackling not only the topic of becoming disabled in Sierra Leone, but the multitude of issues interwoven within it. Though the book covers vast intellectual ground, it remains compelling and persuasive throughout and effectively contributes essential ideas to studies of disability, post-conflict reconstruction, poverty and anthropology, among others. 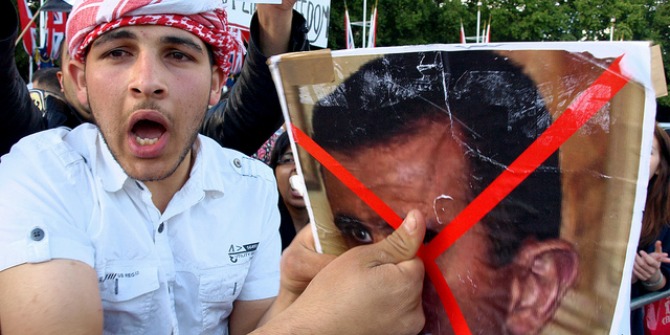