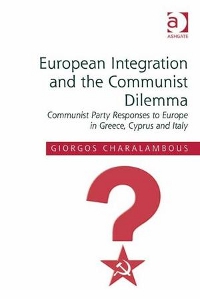 This book makes an impressive and timely contribution to the growing but still underdeveloped comparative academic literature on west European Communist parties. It builds on earlier efforts to study the approaches that these parties have taken to European integration. Other studies have focused on debates on the European constitution or are out of date; this book analyses developments from the 1980s to the present. An extensive amount of case material on three parties adds a great deal to our understanding of their responses to the Economic crises and debates on European integration and their transnational affiliations.

This book will be of great interest to those interested in west European Communist parties, Euroscepticism, Communism, party politics and Europeanisation. It questions whether Communist parties in three countries: Greece (KKE), Cyprus (AKEL), and Italy (Rifondazione) have moderated their positions on European integration and explains how the parties have responded to the challenges it has posed within domestic political debates. The book goes a stage further than previous studies by not only analysing formal changes in party programmatic positions but also the salience that the parties’ leaders have placed on European issues. More broadly it contributes to the study of Communist ideological responses to the European Union.

This study builds on an impressive number of interviews with party elites. These are used to complement the analysis of party documents. The author uses this material to assess how the parties’ responses to European integration were shaped by their ideology, their respective party systems, internal factors and the dissolution of the Soviet bloc.

The book makes the interesting argument that when Communist parties moderate their positions on European integration it tends to be through placing less salience on European issues rather than moderating their formal policy positions and party programmes. The author shows that there is a lack of uniformity between the parties on European issues. He shows a need for future research on into whether other communist parties more broadly, beyond the three cases, have a shared communist identity or internationalist stance.

A major strength of this work is that it explains how theories of Europeanisation can apply to Communist parties, as well as mainstream parties. It shows that while they use European integration as an opportunity structure, it also acts as a constraint on their overall strategy. This work adds to a growing literature that shows that political scientists need to pay closer attention to the comparative study of the radical left and to develop analytical frameworks to study them as parties rather than overlooking them as outliers.

The book’s analysis of three very different cases – the ‘hardline’ KKE, pragmatic AKEL and the refounded Rifondazione – shows how despite the differences between them, a set of variables common to all the parties, including changes in leadership, broad ideological changes and changes in the parties’ domestic party systems shaped all the parties’ responses to European integration. For example, analysis of the KKE’s ‘short-lived pro-EU turn’ ended when orthodox leaders won control over the internal balance of power. Studies of West European Communist parties often struggle to recognise that they faced similar dilemmas and that common variables shaped their development and so this work makes an important contribution.

The chapter on AKEL adds to the growing literature on the party’s complex notion of Marxism/Leninism. This is shown to have been ‘A culture of symbols, intra-partisan dialogue and aphorisms that mostly concern the party’s core members and do not go so far as to touch upon the issue of European integration in any substantive way’. This provides us with insights into AKEL’s ability to combine Marxism-Leninism with broader appeal and closer relations with non-communist left parties.

The book also adds to the underdeveloped literature on the ‘Eurorejectionist’ Marxist-Leninist orthodox KKE party in Greece. The chapter on the KKE makes a welcome contribution to analysing the party’s relationship with the left-wing coalition party SYRIZA.  The author shows, however, how even this extremely orthodox Communist party went through a short, temporary period of moderation on European integration during the late 1980s.

The book’s conclusions highlight that there are huge differences between the responses to European integration made by West European Communist parties. The inability of the KKE to work with more reformist Communist parties or to moderate its Euroscepticism since the late 1980s, contrasts with the other two parties that are studied. A wealth of data is provided to support the argument that involvement in government, internal schisms and strategic calculations based on the search for votes or alliances have shaped the salience that the parties have placed on European integration.

This book is recommended for those interested in the current debates about the Left and European integration. It adds to existing studies and provides ideas that can be used to study other West European Communist parties’ responses to European integration. The book will not necessarily be welcome reading for Communists. Like other recent studies of the Left it shows that these parties have failed to take advantage of the opportunities presented by Europe and the recent crises it has encountered. The study ends by posing the very interesting question of how can an inherently internationalist ideology adapt to the ideological challenges presented by the EU? The author argues that so far the parties’ responses to European integration have been very much influenced by national factors and histories. When their reactions have been so diverse, the author calls into question the principle of internationalism which was a key principle of the Communist movement.

Dr Dan Keith teaches at the University of Sussex. He wrote his doctoral thesis on the role of organisational factors in shaping the diverse programmatic adaptation of West European Communist parties and their successor parties. He has published on the Portuguese Communist Party and the Socialist Party and Green Left in the Netherlands. His research interests include party politics, comparative politics and the radical left. Read more reviews by Dan.