Heroin, Organized Crime, and the Making of Modern Turkey explores the history of organized crime in Turkey and the roles which gangs and gangsters have played in the making of the Turkish state and Turkish politics. James Windle recommends the book to anyone wanting a deeper understanding of the mechanics of transnational policing, or drug trafficking, organised crime and national security in Turkey. The majority of heroin consumed in Europe transits through Turkey on route from Afghanistan. Geographical position at the cross-roads of Europe and Asia undoubtedly presented Turkey with the opportunity to develop itself as a central link in the heroin distribution chain. Corruption is, however, often seen as the key factor in the maintenance of this position. In Heroin, Organized Crime and the Making of Modern Turkey Ryan Gingeras explores the history of organised crime in Turkey, from the Ottoman period up to the present day, in order to better understand this corruption.

Gingeras skilfully analyses a mass of archival data which is expertly crafted into four narratives demonstrating how organised crime groups played a major role in the development of modern Turkey and how the smuggling of opium, heroin and morphine allowed traffickers to amass both wealth and political power. Gingeras also details how social, political, cultural and economic change altered the structure and activities of Turkish organised crime, and how America played a key role in ‘defining and assisting Ankara’s fight against Turkish heroin traffickers’ (p. 3).

As a single case study the book would sit comfortably next to other national studies of organised crime, such as work by Dick Hobbs (Lush Life: Constructing Organized Crime in the UK), Letizia Paoli (Mafia Brotherhoods: Organized Crime, Italian Style) and Peter Hill (The Japanese Mafia: Yakuza, Law, and the State). In fact, the discussion on how changing cultural, economic and political terrains altered the structure, methods and activities of organised crime groups is, in many ways, reminiscent of Hobbs work on East London organised crime.

The book is similar in feel to Alfred McCoy’s classic study The Politics of Heroin. Both authors explore similar themes (symbiotic relationships between state officials and traffickers, and how security interests overshadow counter-narcotics) through mini-biographies of key players, and narratives of smuggling, spying, gangsters and diplomacy. In fact, Gingeras’ description of McCoy’s monograph works equally well as a description of his own: Gingeras ‘constructs an intricate picture of the individuals, networks, and supply-routes’ and ‘introduces the reader to a rich tapestry of actors critical to the construction of this trade’ (p. 120).

While illuminating the linkages between organised crime and the state (and legitimate business), the book is not the work of a nut-job conspiracy theorist. Rather, it demonstrates the complexity inherent in such relationships by showing how different actors ‘battled and collaborated’ (p. 3) and were ‘simultaneously confrontational and cooperative’ (p. 245). Collaboration is here shown to go beyond the offering/collection of bribes to include the employment of smugglers and professional criminals in matters of national security.

The book similarly details the complexity of international cooperation by showing how Turkish police cooperated and conflicted with American counter-narcotic agents. In fact, many of the narratives depict Turkish state employees doing just enough to paint a picture of cooperation whilst undermining joint-investigations by collaborating with the traffickers they purportedly pursued. Furthermore, the book demonstrates how police cooperation can be limited by lack of political will, -under-motivated criminal justice personnel and insufficient drug control laws. Furthermore, in keeping with McCoy, the book demonstrates how Turkish and American security objectives often took precedence over counter-narcotics.

This said, Gingeras demonstrates how America did influence Turkish police practices and state policies. Cooperation between the two states resulted in the professionalization of Turkish law enforcement and improvements in its capacity to counter drug trafficking: even if organised criminals presented a counter influence.

To my mind, the most interesting discussion is of how, within a decade, Turkey’s role in the global illicit opioid market shifted from being a major source of illicit opium to the primary conduit linking Asian heroin to Europe. This is an important example of an adaptive response to law enforcement and preventive interventions. Increased controls over opium production resulted in some of Turkey’s traffickers shifting their attention from the sale of raw opium for foreign manufacturers, to smuggling its most notorious derivative: heroin. Within a decade, Turkish traffickers had become some of the biggest in Europe. The unintended consequence of this shift was that traffickers’ influence over politics increased significantly.

The concluding chapter draws the previous discussions together by investigating the contemporary Susurluk and Ergenekon scandals. The chapter highlights the ‘continuities and discontinuities’ between contemporary organised crime, and its past manifestations. The chapter also provides a brief comparative analysis with other smuggling hotspots to show that Turkey is not alone in forging alliances with organised criminals in the name of national security. By doing this Gingeras calls the notion of Turkey’s ‘deep state’ to account.

Reading the book as a Criminologist I had a few small reservations centred primarily upon conceptual issues. Most notably that Gingeras frames politically motivated paramilitaries as organised criminals and, as much of the discussion centres upon opium and morphine, I found the title’s focus on heroin a little misleading: but then I suppose heroin sells. This said, overall, I liked the book and would recommend it to anyone wanting a deeper understanding of the mechanics of transnational policing, or drug trafficking, organised crime and national security in Turkey.

James Windle is a senior lecturer in Criminology and Criminal Justice at the University of East London. His main research interests are in the area of international drug policy and strategy, and organised crime. His forthcoming book, Suppressing the Poppy: A Comparative Historical Analysis of Successful Drug Control, is an examination of the effectiveness of strategies to tackle illicit opium production in seven countries, including Turkey. He tweets at @JamesWindle6. A selection of his work can be found here. 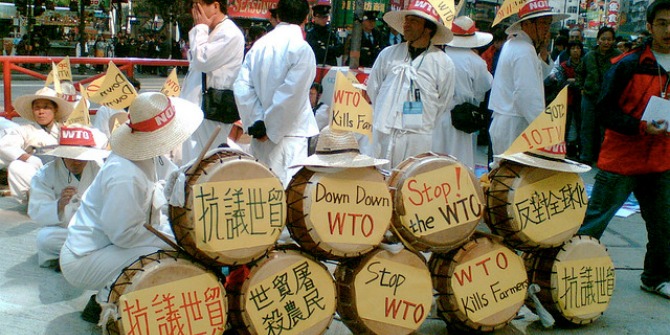