Women in Political Theory is the first volume to explore the intersections of feminism, politics and philosophy, and to consider the contribution of women philosophers to the field of contemporary political thought, claims its author Jane Duran. With a focus on five central thinkers, Sarah Grimké, Anna Julia Cooper, Jane Addams, Rosa Luxemburg, and Hannah Arendt, Duran hopes to show that each woman was in fact an established political theorist of her time. Katherine Williams recommends this volume to students, scholars and readers with an interest in philosophy, political and social theory, feminism, and gender studies. 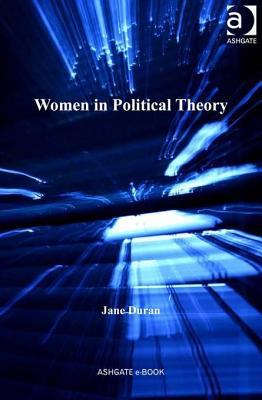 Women in Political Theory by Jane Duran, lecturer in the Department of Black Studies at the University of California, Santa Barbara, illustrates that despite opinions to the contrary, women have been active in the field of political philosophy for centuries.

Duran’s work is split into ten individual chapters; two each for Sarah Grimké, Anna Julia Cooper, Jane Addams, Rosa Luxemburg, and Hannah Arendt. The first chapter concerning each thinker contrasts their work to standard political thought of the time; the second attempts to create a link to what can be considered feminist thinking today. The virtue of this approach, the author believes, is that each chapter can be read out of sequence, but the text remains unified in its approach to the subject matter at hand (p. 2). For each of the women, three of their most famous works are analysed.

The five thinkers who are the focus of Duran’s study span a chronology of 150 years, two continents, and at least two major ethnicities (p. 3). Sarah Grimké and Anna Julia Cooper were two theorists living in the American South concerned about the status of Black Americans. Cooper, as a Black woman, lent her voice to an ongoing debate regarding issues of citizenship and social issues that affected Black women in particular. Jane Addams, Nobel Peace Prize recipient of 1931, was one of the most prominent social reformers of the Progressive Era; championing the rights of women, children, and the poor.  She encouraged women to exercise their right to vote in order to influence policies that had a direct effect on their lives, such as housing. Rosa Luxemburg is perhaps best known as one of the leading Marxist theorists of the 20thcentury. Hannah Arendt, an immediately recognisable figure amongst Duran’s assemblage of women thinkers, already, as Duran notes, has an established reputation as a political theorist in her own right (p. 17). Arendt famously covered the trial of Nazi war criminal Adolf Eichmann in Jerusalem, coining the ubiquitous phrase, ‘the banality of evil’ and wrote extensively on a wide range of issues including violence, race, and human nature.

In her introduction, Duran outlines the role of women in political philosophy from the time of Aristotle and Plato. Whilst Plato may have paid lip service to the role of women in the polis with the notion of ‘female guardians’, the role of women was alluded to but never fully explained (p.4). The status of women as citizens was not fully addressed to at least the Enlightenment period, with the emergence of thinkers such as Mary Astell, and another arguably more famous Mary; Mary Wollstonecraft. Whilst Duran recognises the achievements of the respective Marys, she argues that much of their work is concerned with the attitudes that men held towards women, and are unable to reveal their ‘true’ selves as political thinkers in their own right (p. 6). The value of women like Astell and Wollstonecraft, and their influence on the promulgation of societal perceptions towards women, however, is another debate entirely. Can political philosophy, ‘done’ by women, offer us the answers to fundamental questions? Arguably, what the five thinkers investigated in Duran’s text have in common is the fact that they addressed the political issues that directly affected women which weren’t included in the mainstream political discourses of the time.

Chapter 4 “Anna Julia Cooper and Colour” is particularly illuminating. Cooper remains one of the most enigmatic Black American thinkers; her work is held in high esteem yet is seldom read (p. 81). Cooper was one of the first women of colour to obtain a degree in higher education, and studied at the Sorbonne in France; an experience that would have been a distant dream for many of her countrywomen. Duran states that Cooper showed a genuine concern for the plight of Black women, and their precarious status as American citizens (p. 81). Underappreciated as a political thinker, Cooper was arguably one of the first to recognise the split in society along racial lines. A Voice from the South, Cooper’s collection of essays addressing the issues that faced Black American women, was somewhat of a revelation. She covered a range of topics in her writings, from the French Revolution, the legacy of slavery, and the Haitian revolution. Duran compares Cooper to David Walker, a radical African American abolitionist who preceded Cooper by at least fifty years, leading to some interesting analysis on evolving debates of citizenry and notions of innate rights and obligations. Ultimately, both Cooper and Walker shared a desire to see America ‘live up to its political obligations, and a general sense of outrage at the injustices that human beings inflict on each other,’ (p.88). Cooper is worth the title of political philosopher, argues Duran, because her essays dealt with social issues that had real-world impact on the lives of Black Americans, and on women in particular, and took a stand that would accept no dissent (p. 105).

Chapter 11 “Women and Arendt” held a particular interest for me, as themes of violence and why men and women commit terrible crimes was the focus of my undergraduate dissertation and will form the body of theory behind my forthcoming MA thesis. We often label Arendt as a de facto feminist, but as Duran explores in Chapter 11, Arendt herself would probably have rescinded the label entirely (p. 287). Duran explains that it’s not necessarily her job to uncover what feminist predilections Arendt may, or may not, have had; her role is to analyse where Arendt’s work intersects with contemporary feminist thought (p.287).  Arendt’s ability to traverse over a wide range of positions and issues without losing her analytical nuance, argues Duran, is a necessary hallmark of her work (p. 289), and Arendt’s focus on action can be used to mobilise feminist thinking. Whilst it could be said that Arendt eschewed identity politics, one of her earliest works, Rahel Varnhagen, was the study of a female intellectual and explored at length the notion of ‘Jewishness’. Detractors state, however, that whilst the work questioned the intersection of faith and identity, it does not cover what it means to be a woman (p. 263-4). From Rahel Varnhagen, Eichmann in Jerusalem, On Revolution, and beyond, Arendt’s body of work speaks for itself. It seems, according to Duran, that Arendt might simply have failed to give herself credit as not just a philosopher, but a woman philosopher to boot (p. 279), given her strict adherence to the German school of philosophical thinking.

Women in Political Theory by Jane Duran is a dense body of work that unpacks the contribution of five diverse women to the field of political philosophy. Whilst it may seem like a given that women are active in the discipline in 2014, Duran reminds us that women theorists began putting their thoughts to paper much earlier, and made invaluable inroads regarding the issues that affect women of all demographics today.

Posted In: Gender and Sexuality | Philosophy and Religion | Politics