As road movies have become more prominent in European cinema, in French-Language Road Cinema: Borders, Diasporas, Migration and ‘New Europe’ author Michael Gott analyses a corpus of French-language films that utilise the road to explore the complexity of mobility, borders and identity in contemporary Europe. Ipek Celik Rappas welcomes this as a thoughtful, timely and exciting book that will be an indispensable guide for researchers in European film and mobility studies. 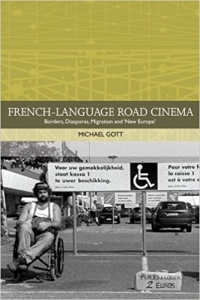 With the collapse of communism, the expansion of the European Union leading to migrations from the East and the Schengen agreement that has opened European national borders, road movies have gained prevalence in European cinema. This well-researched and insightful book points out that road films have become venues for the exploration of contemporary European identity as a means of coming to terms with fluidity. An established scholar on the topic, Michael Gott has previously co-edited (with Thibaut Schilt) Open Roads, Closed Borders (Intellect, 2013), a collection that explores an internationally recognised corpus of European road films. In comparison, French-Language Road Cinema: Borders, Diasporas, Migration and ‘New Europe’ focuses on a less examined yet booming body of films from a larger geography, including French, Swiss and Belgian productions.

Road movies have often been associated with US cinema and US contexts. Rather than searching for the origins of road cinema, Gott pursues a more productive approach: exploring how the road movie format has travelled between Europe and the US to identify its narrative and technical wealth. French-Language Road Cinema shows that European travellers are not the rebels common to US road films; in European road movies, being lost on the road and travelling outside quotidian life become a metaphor for an identity search within and against clearly marked national or communitarian identities.

Informed by mobility studies and cultural geography, the book examines productions that delineate travelling identities that stand against Fortress Europe as well as ‘voyages that construct new, more flexible ways of thinking of home’ (6). Gott also pays attention to particular narrative and formal aspects of road cinema. For instance, European films have more female protagonists and/or directors as opposed to conventional male-driven US road films. They also show diverse forms of transportation (from cars and trains to horse-drawn carriages), displaying less interest in speed than the adventures and possibilities that the road offers.

The first chapter of the book maps out a history of European road cinema from the 1960s—when conceptions of mobility were changing thanks to the establishment of the European Economic Community (EEC), the construction of Berlin Wall and the automobile industry boom—through to the 1990s. Gott detects that European films of the 1960s (for instance, the lesser-known Italian road movie Il Sorpasso (Dino Risi, 1962)) reflect the imbalance between newly-enabled mobility and speed versus ongoing social and economic immobility for certain classes. Especially interesting is the analysis of Les petit matins (Jacqueline Audry, 1962), shot by a woman director and showing the travels of a female protagonist for whom ‘being on the road equates to the opportunity to reinvent herself, to write her own story and to try at least to get outside of the traditional role of women in society’ (33). The chapter also discusses two prominent European directors known for their road films: Aki Kaurismäki and Wim Wenders. Gott argues that both envision identity on the road as a flexible construction; yet, while the former acknowledges the limits of open borders and the difficulties for foreign travellers, the latter fully embraces and celebrates the privileges of Western mobility.

The second chapter explores the characteristics of French-language road films produced in the 2000s. The collection of films analysed—including French production Le grand voyage (Ismael Ferroukhi, 2004), which depicts a father and son’s pilgrimage from a French banlieue to Mecca, and Swiss production La vraie vie est ailleurs (Frédéric Choffat, 2006), which shows encounters through three simultaneous journeys over Swiss borders—indicates that voyages are taken for a wide variety of reasons in French-language road cinema (religious pilgrimage, tourism, business) towards many destinations (Berlin, Portugal, Mecca). According to Gott, French-language travel cinema puts isolated characters in contact with places and people that they would otherwise carelessly pass by, breaks their habits and the personal and spatial boundaries of their quotidian lives, opens up new beginnings in characters’ lives and establishes new communities in ‘voyages towards togetherness, understanding and solidarity’ (84).

The third chapter explores an understudied body of road films by the post-Dardenne generation directors, a flourishing genre in Belgium. After providing insights into the linguistic and cultural issues involved and the complex relationship that the Belgium film industry has with France, Gott analyses five Belgian films of the 2000s. These depict travel towards a wide range of spaces and show many character types, including a woman who travels towards an iceberg to escape the restraints of her working-class life (L’Iceberg (Dominique Abel, Fiona Gordon and Bruno Romy, 2005)) and two wheelchair users who hitchhike towards Finland in a journey that engenders stories from Belgium colonialism to French anarchism (Aaltra (Gustave de Kervern and Benoit Delépine, 2004)). According to Gott, what brings these Belgian films together beyond the unusual choices of places is the parody of oddball characters and ‘absurdist ‘‘abuses’’ of the American road genre’ (103).

The fourth chapter focuses on French productions that reflect the popularity of ‘return’ films, a prevalent subcategory in European road movies that often portray second-generation characters who ‘return’ to their family roots. Gott shows that ‘return’ films display the diversity of French-speaking European citizens. Two French productions that Gott examines —Voyage to Armenia (Robert Guédiguian, 2006) and Ten’ja (Hassan Legzouli, 2004) — show their second-generations subjects’ development of a deeper understanding of their origins, complicate simplistic notions of home, homeland and citizenship and portray diversity without communitarian attachments.

Gott is careful not to glorify the idea of mobility and fluid identity in association with European road films. He develops a useful distinction between two theoretical tangents in road films that explore borders: ‘positive’ and ‘negative’ road movies. The former ‘are more associated with mobility and extension of mobility’, while the latter ‘are primarily concerned with the implications of closed borders and institutionalized restrictions on movement’ (5). Films in the fifth chapter explore the ‘negative’ side of mobility: the mobility of clandestine voyagers. Two approaches make this chapter particularly notable. Firstly, Gott only chooses films with women protagonists (such as Hope tracing a Nigerian woman’s difficult journey towards Europe (Boris Lojkine, 2014) and Marussia portraying a Russian migrant and her daughter as flâneurs in Paris (Eva Pervolovici, 2013)) and manages to avoid films that show the stereotype of the trafficked migrant sex worker from Eastern Europe. Secondly, Gott inquires not only into trips towards European destinations, but also narratives that display the mobile lives of clandestine migrants in European cities as they have to move constantly in search of jobs, food and shelter. Hence, as opposed to other European road movies, Gott insightfully points out, motion in films with migrant protagonists often involves a search for stability rather than a desire to escape the bounds of quotidian lives.

French Language Road Cinema is a thoughtful, timely and exciting book. The wealth of European film analyses it offers is notable in its attention to underexplored women’s road cinema, Belgian and Swiss productions as well as in its care to delineate opposing meanings of mobility for different European residents. The book reveals a nuanced approach to road film as a form that makes its spectators consider the complexity of identity, mobility and borders in today’s Europe, offering an indispensable trans-disciplinary guide for researchers in European film and mobility studies.

Ipek Celik Rappas is an Assistant Professor of Media and Visual Arts at Koç University, Istanbul. She works on the representation of migrants and minorities in European cinema and the role of film and television production in the urban renewal of European cities. Her book In Permanent Crisis: Ethnicity in Contemporary European Media and Cinema was published by University of Michigan Press in 2015. Her articles have appeared in Cinema Journal, French Cultural Studies and Television and New Media.