In The Celebrated Marquis: An Italian Noble and the Making of the Modern World, John Bessler explores the reputation and legacy of Cesare Beccaria (1738-94), a largely forgotten eighteenth-century Italian aristocrat, to show the enduring significance of his writings on equality, economics, law and society. The book underscores Beccaria’s indelible impact on our approach to crime and punishment in the present day, writes Bharat Malkani, and will inspire reformers still fighting against ‘arbitrariness, tyranny and cruelty’ in our legal systems.

The Celebrated Marquis: An Italian Noble and the Making of the Modern World. John Bessler. Carolina Academic Press. 2018. 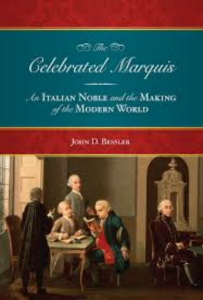 In The Celebrated Marquis: An Italian Noble and the Making of the Modern World, John Bessler sets out to resurrect the reputation and legacy of Cesare Beccaria (1738-94), a largely forgotten eighteenth-century Italian aristocrat whose ‘writings on equality, economics, and law and society’, in the words of Bessler, ‘transformed the world’ (15). This is not the first time that Bessler has turned his attention to Beccaria. In The Birth of American Law: An Italian Philosopher and the American Revolution, published in 2014, he detailed the influence of Beccaria’s writings on the founders of America. This book is more ambitious in scope, however, as Bessler ‘seeks to restore Cesare Beccaria’s rightful place in the pantheon of the world’s most influential historical figures’ (15).

The author largely succeeds in his aim, as it is difficult to finish the book without feeling that Beccaria’s life and writings have had as much, if not more, influence on the concept of liberal democracy than those of Jean-Jacques Rousseau, Montesquieu and John Locke, as well as other Enlightenment figures. Although Beccaria’s 1764 treatise On Crimes and Punishments might be generally familiar to criminologists and penologists, Bessler demonstrates that the Italian writer should also be considered alongside the likes of Adam Smith by economists, since his work in this field has been just as influential.

The book begins with an account of Beccaria’s youth. Although he was born into nobility, the historical record suggests that Beccaria did not live a life of luxury. The accounts of Beccaria’s personal life throughout the book are engaging. In 1760, for example, he enraged his father when he announced that he wished to marry a girl considered to be of insufficient social standing for the Beccaria family, and it is at this junction that Bessler describes Beccaria as ‘a dreamer and […] undisciplined idealist’ (42).

This description goes some way to setting the scene for the next chapter, which focuses on the text that Beccaria is usually associated with: On Crimes and Punishments. This small volume, Bessler explains, was revolutionary in its time for proposing that punishments be proportionate to the gravity of offences. Although we might consider his suggestion of ‘perpetual slavery’ as a punishment to be abhorrent today, we must recognise that at the time of writing, his rejection of torture and the death penalty was idealistic from a liberal point of view. In the eighteenth century, On Crimes and Punishments was quickly translated into many languages and was lauded by revolutionaries, just as it was condemned by reactionaries.

The influence of the text is most clearly apparent in the French and American revolutions of the eighteenth century, and the depth of research carried out by Bessler to support this is astonishing. Bessler draws on letters and notes written at the time of the American Revolutionary War; lectures delivered at Yale University in the 1890s which were delivered with the benefit of distance from that era; and the author’s own close examination of the similarities between the text of On Crimes and Punishments and the wording of newly emerging state constitutions, such as that of New Hampshire in 1784: all serve to illustrate the pervasive influence of the text on the thinking of the founders of America. As Bessler writes: by the time of America’s independence from Great Britain, ‘Beccaria’s treatise had clearly already shaped the framers’ thoughts and views’ (202).

That said, Beccaria’s name does not appear in any of The Federalist Papers, and this would seem to contradict Bessler’s central claim. After all, the framers were not averse to referring to Montesquieu, for example. Bessler can only offer suggestions for the glaring omission. His first thesis – that the framers neglected to mention Beccaria by name because of ‘the haste of their preparation’ (273) – is given short shrift. Instead, Bessler writes that: ‘more likely, simply because the proposed U.S. Constitution was an instrument to govern the structure of America’s federal government, The Federalist Papers never made explicit mention of Cesare Beccaria’ (273). At the time, there were relatively few federal crimes, and criminal law in general was in the province of state governments. While he might not have been referred to by name, though, the traces of Beccaria’s legacy are clear. Alexander Hamilton’s contributions to The Federalist Papers are provided as evidence of the influence of the Italian philosopher.

Another major contribution of The Celebrated Marquis is that it explains why Beccaria’s writings on economics deserve the same adulation as those of Adam Smith. Shortly after the publication of On Crimes and Punishments, Beccaria undertook a short but ultimately important stint in academia, teaching political economy at the Scuole Palatine in Milan from 1769 to 1771. It was during this time that he formed his views on issues such as the division of labour and on wages, and Bessler joins other writers such as Joseph Schumpeter and Adolph Caso in noting that Beccaria’s ideas anticipated the theories found in Smith’s The Wealth of Nations, published in 1776. We can only speculate why Smith enjoys the sort of recognition today that is denied to Beccaria, but Bessler’s account offers some clues. Beccaria’s teaching notes were not published until after Smith’s The Wealth of Nations, as Elementi di economia pubblica, in 1804. We do not know why his notes were published so much later, and indeed posthumously, but it is notable that shortly after his time teaching, Beccaria suffered significant upheaval in his personal life, which most likely had an impact on his professional work. In 1772, just one year after he finished teaching, his fourth child died in infancy. Two years later, his wife passed away amid scandalous stories of infidelity on her part.

While his work on economics has largely been overshadowed by that of Smith, Beccaria’s writings on crime and punishment had, and continue to have, an indelible impact on lawmakers around the world. It is not just Anglo-American legal systems that bear Beccaria’s influence. Once again, Bessler’s research is exemplary in its detail: he has surveyed, for example, judicial decisions in India, the writings of Chinese academics and papers from conferences in Japan and Hong Kong, in which reference is made to Beccaria’s 250-year-old tract. This is not to say that On Crimes and Punishments has had a universal impact, however. Far from it. Even within those countries that unmistakably bear the mark of Beccaria, criminal justice systems do not quite live up to his ideals. America still has the death penalty, which would surely disappoint Beccaria. And although the first Arabic translation of On Crimes and Punishments appeared in 2011 in Lebanon, it is somewhat of an understatement when Bessler writes that ‘the Arab world [is] a place where Beccaria’s ideas have yet to fully penetrate’ (282).

Indeed, although Bessler is generally supportive of Beccaria’s vision, he is not blinded to the fact his ideals are not yet reality. And this is ultimately the purpose of The Celebrated Marquis. If we are going to change legal and political systems so that they are less barbaric and more humane, then we need to return to the ideas of the people who at least set us on the path towards such transformation. It is not enough to just read Beccaria’s words. We must comprehend the social and personal circumstances that influenced the influencer, and to this extent Bessler’s work is essential reading for those wanting to understand firstly, why the world has generally, though not uniformly, moved from the barbarism of the Dark Ages towards more humane legal systems; and secondly, how to continue to push for legal systems that are more respectful of human dignity. Indeed, as Bessler points out, Beccaria does and should continue to inspire reformers:

his admonitions against arbitrariness, tyranny and cruelty, and his cry for the death penalty’s abolition and equality of treatment under the law endure, forever inviting change into the future (326).

Dr Bharat Malkani is a Senior Lecturer in the School of Law and Politics, at Cardiff University. His research and teaching are in the fields of human rights and criminal justice, with a particular focus on capital punishment. He is author of Slavery and the Death Penalty: A Study in Abolition (Routledge, 2018).