In Palestine and Rule of Power: Local Dissent vs International Governance, Alaa Tartir and Timothy Seidel bring together contributors to explore the local forms of Palestinian resistance against Israel’s occupation of the Palestinian territories and the neoliberal strategies deployed by intervening external organisations and Western donors. Beata Paragi recommends this volume for exploring the diversity of Palestinian actors, voices and views when it comes to local political demands and modes of resistance. 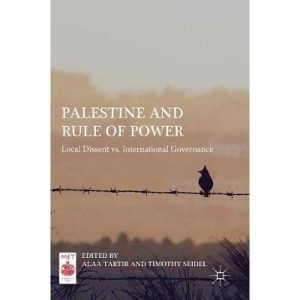 The purpose of the volume Palestine and Rule of Power: Local Dissent vs International Governance, edited by Alaa Tartir and Timothy Seidel, is to contribute to ‘another history’ that introduces the Palestinian question in alternative ways. Neither the editors nor the rest of the contributing authors are strangers to the subject. They are knowledgeable not only in academic terms, but also in their familiarity with the daily experiences of the Palestinians living in the West Bank, Gaza Strip and East Jerusalem. Having spent varying lengths of time in the Palestinian territories, they have observed first-hand how Israel applies various measures and tools to control the lives and movements of Palestinians. For the authors, these measures are not merely expressions of temporary occupation, but instead reflect a much darker reality: settler colonialism encouraged by the State of Israel, the aim of which is not living in peace with Palestinians, but their very outcrowding. This endeavour is supported by neoliberal market logic and assisted by donors. As contributors detail in their important volume, internationally-promoted neoliberal solutions, coupled with ignorance of local Palestinian political demands, are one of the explanatory factors for the lack of Palestinian sovereignty.

The volume is structured into three main parts. While the first section explores Palestinian resistance and mobilisation strategies, the second analyses external intervention and the neoliberal strategies applied by Western donors. The last part of the collection is concerned with the consequences of the donor-supported security cooperation between Israel and Palestinian actors.

The theoretical framework – revolving around the concepts of necropolitics and necropower as coined by Achille Mbeme (2003) – is presented in the first, introductory chapter by the editors Tartir and Seidel. Leaning on these concepts, they identify two forms of external power that constrain any Palestinian movement: settler colonialism enforced by Israel and neoliberalism advocated by international donors.

This conceptual framework is strengthened and complemented by two further chapters. Ben White, using the term ‘apartheid’ instead of occupation, analyses the restrictive measures of Israel’s settler colonialism and the ‘permanently temporary occupation’ in Chapter Two. In Chapter Three, Seidel examines ‘the state decentered as an actor in international politics’ and explores ‘additional [usually invisible] landscapes or maps of resistance’. He argues for ’focus[ing] on bodies [as it] helps us visibilize, helps us see the violence and the resistance as embodied subjectivity’ (11). Here, prioritising embodied subjectivities over the centrality of the state in political analysis leads to a much better understanding of oppressed political claims. Seidel also introduces the realities of daily resistance by sharing the experiences of those affiliated with the Palestinian Land Defense Coalition and the Palestinian Farmers’ Union (56-62).

Yet, I sense some sort of inconsistency with reference to the (in)visibility of the Israeli occupation, which leads to Palestinian resistance (62-63). The reader cannot but conclude that there are ambivalent patterns shaping reality simultaneously. The Israeli occupation is visible and invisible at the same time (‘invisible occupation’, as described by an United Nations Office for the Coordination of Humanitarian Affairs (UN OCHA) officer, cited in Seidel, 62). Being non-existent in some regards (see Tartir’s chapter on Israeli-Palestinian security cooperation), the Palestinian resistance is also very much present – even if in ways that remain invisible to some.

These hidden forms of resistance are further discussed in Chapters Four, Five and Eight that draw more nuanced and personal accounts by focusing on the activities of civil society actors and individuals and the challenges they face. As Nijmeh Ali, Dana El Kurd and Melanie Meinzer demonstrate wonderfully, it is not the visible political institutions (political parties, official actors) that carry the true burden of resistance, but individuals and other civil society actors that try to navigate their own conscience, political convictions and the daily hardships constraining their lives.

Taking Meinzer’s chapter as an example, she examines the relationship between Palestinian educational organisations and their donors. The chapter introduces and discusses some findings of a research project that included 44 original interviews with Palestinian educational NGOs, membership-based organisations (MBOs) and their donors, as well as 240 surveys of Palestinians living in the West Bank, gathered during eleven months of field research between 2014 and 2016 (179-98). Defining the term ’solidarity donors’ and distinguishing ordinary NGOs from so-called MBOs, Meinzer focuses on international cooperation in the field of education that is ‘based on a shared vision of development and education as long-term processes of sociopolitical change’ (176). In these relationships, local organisations, especially MBOs, enjoy more control over their mission and on how funding is used.

In Chapters Six, Seven, Nine and Ten, Anders Persson, Jeremy Wildeman and Tartir discuss the role of donors from various perspectives. Common to these chapters is the conviction that international, official donors, as though acting in a neatly designed laboratory, encourage solutions that respond neither to local interests nor to political demands concerning independence. The majority of donors are interested in producing statistically quantifiable results or economic and institutional development measured by indicators. Palestinian political demands, however, are supported only to the extent to which they comply with Israeli security needs.

Wildeman’s contribution explores how neoliberalism is understood in the Palestinian case, how Western donor countries subscribe to the idea that the weaker side should be blamed for violence and how they demand that the Palestinians renounce violence without making the same demands of Israel (155). Wildeman is not alone in the critical literature in arguing that ‘development was a form of domination controlling the Palestinians’. As he emphasises, donor states ‘specifically ignored the settler colonial context in which the [top-down designed] aid program, totally ill-suited to challenge settler colonialism, was imposed’. This ignorance, or the ‘de-contextualized and ahistorical’ donor approach (169), simultaneously ‘gave the occupation new legitimacy and left Israel with full control over oPt [occupied Palestinian territory], Palestinians and their economy’ and ‘mask[ed] the destructive military occupation in the liberal language of peacebuilding’ (155).

While the purpose of the book and its emphasis on subjective experience is clear, its approach to Israeli-Palestinian relations, however, is a bit confusing. If the main message of the chapters discussing the various ‘subjective’ resistance efforts undertaken by Palestinians is taken into consideration, a similarly humanistic reference to individual actors on the ‘other side’ is somewhat missing. The volume portrays Israel as an external force, a homogenous and monolithic unit, the main feature and objective of which is the settler-colonial project. Hence, it seems as if all Israelis, at least Israeli Jews, were somehow willing to give up their principles of humanity, norms and values, whether these be secular or religious, in return for benefits such as national security or deliberate territorial-settler expansion offered by the Israeli state.

Even if mainstream public opinion has been right-wing for many years, as illustrated by the recent election results, there are many Jewish actors in Israel that campaign for the rights of those Palestinians that live over the green line, work on joint Israeli-Arab programmes fostering better understanding between various segments of Israeli society and aim at raising awareness among Israeli Jews about the daily experiences of occupation. Strategies of Palestinian activists living in Israel are part of the analysis (see Ali in Chapter Four), but Jewish human rights activists, initiatives and organisations are hardly mentioned in the book. B’Tselem, for example, is used as a source of data, but not as a case illustrating that Jewish Israelis themselves are divided over the costs and benefits of the occupation.

Beyond these issues, Palestine and Rule of Power is an excellent volume targeting advanced readers, a valuable contribution to the growing body of literature and a recommended read that explores the diversity of actors, voices and views on the Palestinian side.

Beata Paragi is an associate professor at the Corvinus University of Budapest. She was a visiting researcher at the Hebrew University of Jerusalem and an EU Marie Curie research fellow at the Fafo Research Foundation, Oslo. Her publications include papers published in the Current Anthropology, Journal of Intervention and Statebuilding, Alternatives and a recent monograph, Foreign Aid in the Middle East: In Search of Peace and Democracy.

Posted In: Africa and the Middle East | Development | Law and Human Rights | Politics