The new LSE Library online exhibition Making Modern Women: Women’s Magazines in Interwar Britain highlights the complexity of magazines produced by women for women readers between the two World Wars and the different notions of ‘modern women’ they suggest.

In this blog post, curator Dr Gillian Murphy introduces six items from Making Modern Women. Taken collectively, the examples show the richness and diversity of genres addressed to women readers, offering them a new world of opportunities, as wives and mothers, as active, global citizens and as wage-earners. 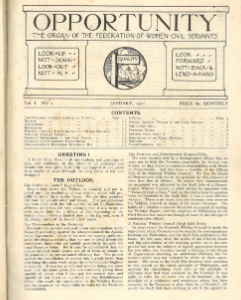 The leading image for the exhibition is taken from the masthead of Opportunity, the journal for the Federation of Women Civil Servants, which was launched in January 1921. Interestingly, the journal was not named after the profession (e.g. The Woman Teacher, The Woman Engineer) but after an aspiration that women civil servants wanted to achieve. They wanted equality, as shown on the signpost above, of opportunity within the civil service. Campaigns for equal pay and equal entry into the service were long, but during the 1920s, women civil servants also campaigned against their dismissal from post when they married. 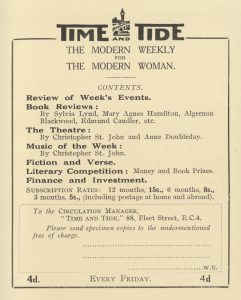 Time and Tide was launched on 14 May 1920 by Lady Margaret Rhondda, former suffragette and a wealthy businesswoman. As shown in this advert from The Woman Engineer, its strapline was ‘The modern weekly for a modern woman.’ It had an overt feminist agenda, seen particularly during its first decade of production, with articles ranging from women’s education and employment, to marriage, to motherhood and birth control, alongside the ongoing campaign for equal franchise. Time and Tide also provided important space to modernist female authors through book reviews and publication of short stories.

Find out more about Time and Tide in our collaborators’ AHRC-funded project, Time and Tide: Connections and Legacies. 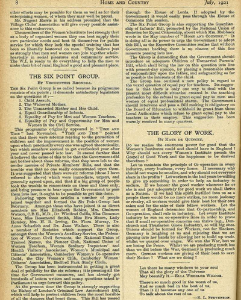 In November 1920, Time and Tide announced a ‘programme’ of ‘six much needed reforms, which especially concern women as women, which they themselves must press for if they want them settled’. This ‘programme’ became the basis for the Six Point Group, which was formally launched in February 1921. It became a leading gender equality campaigning group during the interwar years. This article about the Six Point Group was published in Home and Country, the magazine of the National Federation of Women’s Institutes, itself founded in 1915. It listed the six points for reform, the founding members, many of whom were involved in Time and Tide, and the supporting organisations. 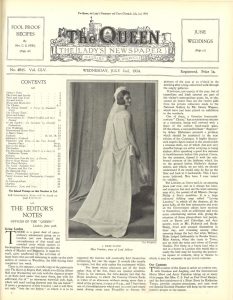 In 1904 Naomi Royde-Smith joined Saturday Westminster as secretarial assistant to the editor. Eight years later she became its literary editor. In 1920, she was writing book reviews for Time and Tide but she was looking for a new job. In March 1924, she became editor of The Queen, an elite society paper for debutantes, founded in 1861. Naomi started making changes immediately. She increased the books and arts coverage by several pages and introduced an editor’s column which discussed policy and politics. In this issue for July 1924, she featured modernist author Dorothy Richardson’s short story, ‘In the garden’. Naomi was sacked in September 1924 as the readers of The Queen were not ready for her editorship. 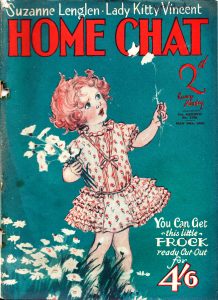 Edited by Maud Bown and her sister Flora Bown, Home Chat was a small format, domestic weekly that aimed to provide titbits of knowledge and reliable information for women at home.

Alongside articles on children, the home and married life, this issue of Home Chat also published articles about the successful French tennis player Suzanne Lenglen and the views of Megan Lloyd George on the forthcoming General Election on 30 May 1929, the first in which women over 21 could cast their vote. 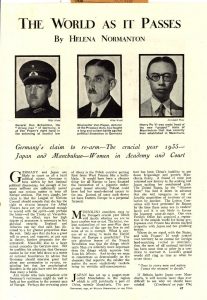 Prominent campaigner for women’s rights, Helena Normanton was the first female student at the Bar in England and became a practising barrister. She was also a prolific writer of articles, particularly for Good Housekeeping. Founded in 1922, it was a magazine for middle-class women providing comprehensive home management advice. Helena’s early articles covered careers for women and discussion of questions of political and legal interest. During the 1930s, Helena wrote a series entitled ‘The World as it Passes’, which offered a summary of world events, often with a pacifist-international outlook. In this particular article from November 1932, Helena asks: ‘Is not the sight of all that is menacing the peace of the world enough to arouse the average woman? It is she who matters […] and she may be seeing the war trains off at Waterloo again if she does not bestir herself more vigorously in the near future.’

You can explore the Making Modern Women exhibition online and pick out your own favourite items.

Note: Images are provided courtesy of LSE Library/London School of Economics and should not be reproduced without the permission of the copyright holder.

Dr Gillian Murphy is the Curator for Equality, Rights and Citizenship at LSE Library.