In They Eat Our Sweat: Transport Labor, Corruption, and Everyday Survival in Urban Nigeria, Daniel E. Agbiboa challenges simplistic understandings of corruption by offering a captivating study of Lagos’s informal transport sector. This deft and rigorous examination is an important read not only for scholars of corruption, but also those interested in transport, urban informality and urban governance, writes Daniela Schofield. 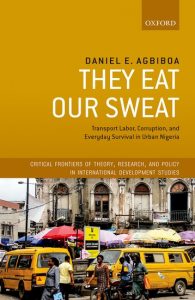 In 2016, when then UK Prime Minister David Cameron inelegantly referred to Nigeria as ‘fantastically corrupt’,  media outlets were quick to point to the inaccuracy of this remark by citing that Nigeria ranked 136 of 176 countries on that year’s Transparency International’s Corruption Perception Index (CPI). In They Eat Our Sweat: Transport Labor, Corruption, and Everyday Survival in Urban Nigeria, Daniel E. Agbiboa argues that approaches to standardising corruption, such as the CPI and comparisons across contexts, are untethered from the day-to-day realities of those living in African cities.

Agbiboa’s examination works to undo oversimplified understandings of grand corruption by offering a captivating study of petty corruption in Lagos’s informal transport sector. Agbiboa explores how petty corruption functions on an immediate level that permeates daily interactions. They Eat Our Sweat is a gripping analysis of how corruption is sculpted by and perpetuates multifaceted social networks upon which scores of Lagosians are dependent for their livelihoods and how these networks are embedded within the Nigerian state.

They Eat Our Sweat is situated in Lagos where informality is pervasive. An estimated 70 per cent of residents live in informal settlements and 75 per cent of the city’s transit needs are fulfilled by informal transport providers. These include motorbike-taxis (okadas), tricycle-taxis and minibus-taxis (danfos). Agbiboa titles his book after the idiomatic expression, to ‘“eat the sweat” (i.e. hard work)’ (31). This encapsulates the relentless extractionist violence experienced by informal transport operators whose labour keeps Lagos running.

Agbiboa highlights the corporeal language of consumption used in reference to corruption throughout the informal transport sector in Lagos as well as other African cities such as Dar es Salaam, Kampala, Nairobi and Accra, among others. Informal transport not only provides a sector for examining corruption, but also a prism through which to interrogate the binary framing of formality/informality and understandings of the borders (or lack thereof) between the two. 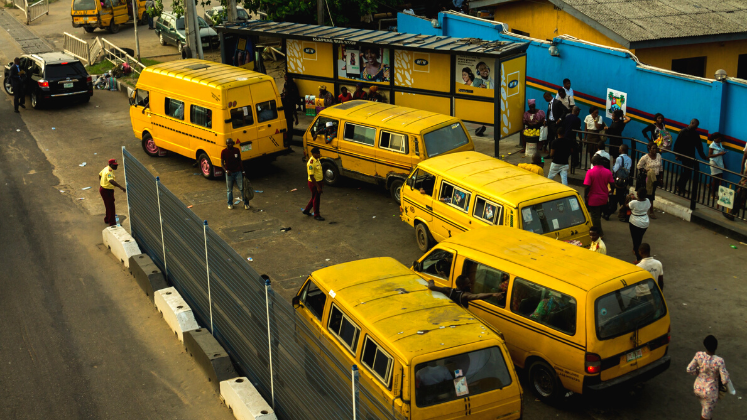 Photo by Dami Akinbode on Unsplash

They Eat Our Sweat explores the embedded social relations and norms that drive corruption within daily interactions and uses the moral economy as a notion that gives corruption legitimacy through the socio-political practices of everyday life (6). The book draws on Agbiboa’s fieldwork in two areas of Lagos: Oshodi and Alimosho. Agbiboa, ‘an omo eko (“child of Lagos”)’ (41), used a critical mobile ethnographic approach that involved simultaneous use of transport and interviewing transport users and operators. He also spent two months as a danfo conductor where he worked to collect fares from passengers, shout names of stops, negotiate ‘fees’ (or bribes) to allow the danfo to continue its route and attended Nigeria’s Union of Road Transport Workers (NURTW) meetings.

Through this approach Agbiboa provides grounded insight into daily manoeuvrings for survival in Lagos and the relationship between these everyday activities and urban governance. An unanticipated, but intriguing, insight is that Agbiboa’s fieldwork was conducted between July and October 2014, a time when Lagos, and the region, was experiencing an outbreak of Ebola. Agbiboa speaks to fears of infection altering patterns of gathering in public areas. He also writes that the ‘tentative mood during this period was palpable in the unwillingness of many Lagosians to be interviewed by a random stranger’ (42). This is interesting not only methodologically for those conducting research during future epidemics or pandemics, but also in finding that calls for social distancing were followed, challenging the perception of informal spaces and activity as chaotic and disorderly.

In the first of six chapters, Agbiboa examines ‘corruption wide’, overviewing the definitional and moral challenges of corruption, and ‘corruption close’, examining inevitable participation in corruptive practices to function in urban life due to the prevalence of elite corruption. He also points to the inaccuracy of categorising corruption as illegality.

Chapter Two reviews how corruption is discussed, morally evaluated, culturally constructed and rationalised to push conceptualisations beyond ‘Afro-Saxon’ interpretations to the sociocultural and linguistic contexts in which corrupt interactions occur (77). This chapter is central to tethering Agbiboa’s study to critical discourse analysis of the idioms of corruption, outlining how the language of food, eating and consumption plays out in African political and social contexts. Agbiboa includes previous articulations of elite capture as ‘belly politics’ and the everyday language of public officials and elites eating, consuming and drinking the ‘sweat’ (that is, the labour) of workers. The text is infused with examples from across different African cities. This bounty of secondary sources provides depth and helpful comparators for Agbiboa’s observations in Lagos. Yet, reliance on long in-text quotations at times distracts from Agbiboa’s voice.

The third chapter explores the politics of informal transport sectors across Africa with a focus on Lagos. This chapter demonstrates the centrality and intricacies of informal transport in Africa’s urban areas. It sets out the importance of the work of transport operators as a vital cog in urban functioning, despite often being stigmatised, penalised, criminalised and regularly subjected to extractive corruptive practices by unions and law enforcement officials.

In Chapter Four Agbiboa highlights the ‘occupational subculture’ (119) of this cog through an analysis of the slogans found on danfos. This is offered as a way to examine relationships between Lagosians and visual articulations of existence and struggles in the urban environment. Having spent many hours in and around dala dalas minibus taxis in Dar es Salaam myself, Agbiboa’s entexualisation (120) approach provides a fresh and rigorous analysis of an aesthetic aspect of urban life that I have often observed but never critically examined.

Chapter Five examines the emergence of agberos, largely male youth who commandeer bus stops, junctions and motor parks as ‘violent extortionists’ (146), extracting bribes from informal transport workers under the auspices of the NURTW. Agbiboa traces their transformation from passenger callers gathering riders for danfo drivers to their implicit integration within the NURTW. This was in response to market logic following International Monetary Fund (IMF) structural adjustment programmes (SAPs) during the 1980s, resulting in their highly politicised role as pervasive ‘tax collectors and foot soldiers for the union’s “dirty work”’ (146). This chapter explores the degree of association between the NURTW and the Lagos State government. Agbiboa argues this ‘patronage politics’ is a tacit sanctioning of violent extractive practices by agberos (146).

In the final chapter Agbiboa demonstrates how some groups of informal transport workers, primarily okada (motorbike-taxi) drivers, collectively attempt to push back against corrupt practices. He highlights the tensions between such groups staking their ‘right to the city’ whilst macro-level forces push neoliberal urban governance agendas aimed at sculpting Lagos into a world-class megacity.

Agbiboa succeeds in demonstrating that corruption is neither simplistic nor uniform. Rather, the micro-level interactions, transactions and exploitations that constitute everyday transport functioning collectively compose the muscles, ligaments and bones of a wider body of corruption. By chronicling the evolution of agberos from young men trying to make a survival income to henchmen of the NURTW and the consequent pervasiveness of bribery and exploitation in Lagos’s informal transport sector, Agbiboa substantiates his central argument that corruption is not a phenomenon of Nigerian culture, but rather a set of interactions borne out of economic necessity that is exploited by elites.

Agbiboa depicts perceptions of how the violent extraction of ‘billions of naira’ (158) from transport operators and passengers persists due to the mutually beneficial relationship by which the Lagos State government is supported by ‘political thugs’ supplied by the NURTW’s cadres of agberos. Agbiboa argues that these ‘close relations between agberos and the NURTW illuminate a model of urban youth clientelism’ (158), demonstrating the entrenchment of everyday petty corruptive practices in state functioning. This shows how an understanding of everyday interactions is critical to understanding urban governance and importantly, as Agbiboa recognises, to move away from depictions of informal transport in Africa as ‘ungoverned and chaotic’ (151). Instead, Agbiboa frames it within the context of ‘double capture’ (149) as his study empirically documents how formal governance links to informal activity and extraction. In this analysis there is a lot to be learned about informality and African cities, representing formality and informality as more complex than ‘homogenous and binarized’ (132) domains.

Agbiboa is successful in challenging the notions of corruption captured and proliferated by perception indexes such as the CPI with empirically grounded findings. They Eat Our Sweat works to counter the risk of corruption and informality becoming buzzwords that are hollowly defined and thinly conceptualised when used in practice by development practitioners, multilaterals and others seeking to ‘harness’ the potential of African cities. Agbiboa’s deft and rigorous examination of corruption in Nigeria is an important read not only for scholars of corruption, but also those interested in transport, urban informality and urban governance, particularly planners and funders of urban infrastructure projects. World leaders would also benefit from reading They Eat Our Sweat to gain insight into the everyday embeddedness of corruption before voicing simplistic and clumsy hyperbolic descriptions on the world stage.

Daniela Schofield is a researcher focusing on gender, informality and climate change in urban areas. She has spent the past decade working in international development and humanitarian programming and is interested in critically examining the interface between the delivery of international aid and everyday lived realities. You can follow her on Twitter @DaniSchofield. 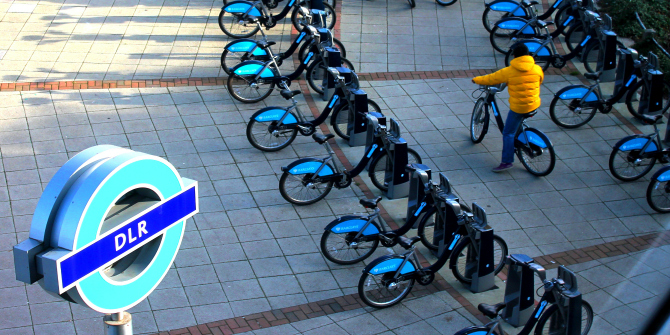