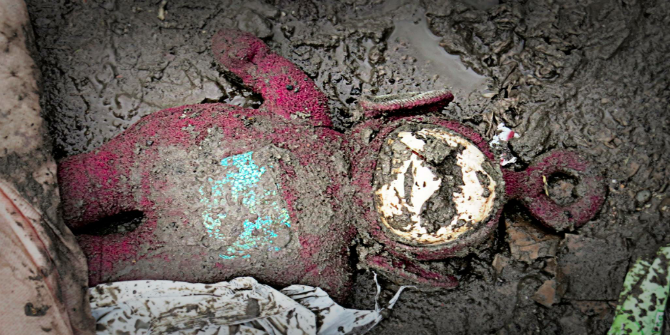 About 30 miles away from Dover, a crazy Afghan boy, Rambo, asks Liz for new shoes. He needs them to jump on a lorry, which is supposed to take him to his paradise. Last week, a friend of Rambo’s died during his latest attempt. Rambo, wearing white forearm protectors, will not die, because he is the king of the universe. Or so he believes. He also believes that he is about 12 years old, but he doesn’t know for sure. Only few of the Afghan boys in the Calais Jungle know their actual age, Liz mentions.

“I’m horribly committed now”, says Liz, who volunteers as head of the Unofficial Women’s and Children’s Centre in the Calais refugee camp. The Centre’s Facebook page has this “unofficial” in its title, a way to subtly point to the fact that despite their being 500 children, one fails to find any official governmental assistance or a United Nations Commission on Human Rights (UNCHR) representative. Thus Liz, a former British fire-fighter who worked with young arsonists in her spare time, must be the camp’s Swiss knife. For the 20 unaccompanied children between the ages of 10 and 13, she is mum, caretaker, psychotherapist, and sparring partner. Liz hates her kids, and she loves them. She swears from time to time when she speaks about them, calls them idiotic, brazen, stupid, and she is right.

Rambo is one of these stupid, unaccompanied children. Son and heir, he was dispatched to reach the so-called Promised Land, Britain, from Afghanistan. For his family, which lives in the rural, Taliban-controlled Logar Province, Britain is a haven. It is the place where NATO does not kill civilians by accident, a region the Taliban surely does not invade. It is a country that has historically been a land of migrants, an island that offers a good welfare system, even for the itinerant Rambo. His family drummed it in him to “Reach the UK at any price. Do not engage with anyone until you are there.” Unlike some of his friends in the camp, he does not have family members in Britain. For him, there is no legal way to fulfil his Mission Impossible. Nevertheless, Rambo wants to be a good son.

Liz admits they call him Rambo here because he takes the greatest risks. In his last attempt, he left Liz’s van, his current home, at 1am, to walk seven hours to the nearby camp in Dunkirk. Doing so gave him easier access to UK-bound lorries. He tried to jump onto them. That is why he needs good shoes and is also why Liz hates her children. She is utterly worried about them, like a mother, and describes Rambo as “scary”. Scary not because he channels his trauma through violent fights with her – she is a former fire-fighter who knows how to defend herself – but because of the uncertainty of his future. “It is a bit of a fucking nightmare” says an impassioned Liz, aptly describing both her circumstances and the humanitarian crisis in Calais more generally.

Liz is a slender woman in her fifties who knows her children. Over time, she learnt a little Pashto, and the boys also understand most of her English by now. The bits they don’t understand are discernible through the different tones of her voice for each scenario. The indignant reproof when Rambo has erased all contacts on her old, grey phone. The fervid plea, mixed with anger and frustration, when she appeals to the French Government to manage the crisis in a humane way. The incredible tenderness that her raspy voice miraculously evokes when she consoles the delicate-yet-hardened souls to make them forget what they have experienced.

On their journey to Europe, the boys have been drugged, beaten and put into tiny spaces by traffickers. Despite this, they were hopeful when they arrived in Calais. They were close – very- close to their goal: 30 miles away from Dover. After months knee-deep in mud, temperatures around freezing point, panic and riots over food distribution, and unfruitful attempts to cross the Channel, they have changed. Now, all Liz and her team can offer them is resilience, because, as she says, they are “fucked, lonely, and frightened”. Like all frightened children, the boys want to talk to their mum. Their real mum, in Afghanistan, if she is still alive. To this end, Liz organised phone top-ups for them because it hurts her watching them gradually fall apart.

The French authorities are impatient. Instead of waiting for the camp or the boys to disintegrate, the riot police will evict a part of the Jungle this week. Countless flashing blue lights on the horizon – police vans that surround the camp day and night – augur through the smoke of wooden stoves that the state is ready to restore its monopoly on power. For the boys, the lights are the sword of Damocles. The lights mean that they will be registered and fingerprints will be taken, along with their chances of crossing the Channel. The state will pack them into containers, far away from the Children’s Centre with film nights, counselling, kickboxing classes, and Liz, she believes. She does not know, the authorities have never spoken to her. No one knows what will happen. In any case, they must run soon to fulfil their parents’ dream. Rambo needs new shoes for that, his pair has holes. Liz gets him a new pair, size 2. 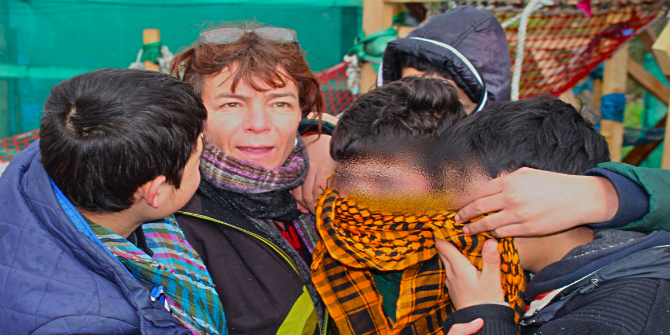 This blog piece was first published here and includes additional videos and podcasts.