Aristotle’s Account of the Place of Women within the Polis

Aristotle’s Account of the Place of Women within the Polis 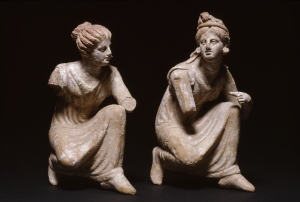 In Politics, Aristotle delves into the role of women in the Polis, their place within the household, and the particular virtues they carry. Aristotle tries to explain the subordinate position of women in society through a natural justification for women’s natural confinement to domesticity, thus women are unable to reach true eudaimonia and participate in the politics for the common good. Aristotle’s ordering of society stems from a masculinist view, although he acknowledges particular attributes and roles of women; he retains the misogynistic distinction between genders and this idea that women are inferior by nature thus cannot contribute to the society. Therefore, this essay will argue that the inferior virtues and attributes that women are seen to possess by Aristotle do not hinder their abilities for political participation but are crucial to a society’s advancement and collective betterment as supported by modern care ethics.

Aristotle in certain respects acknowledges positive attributes that are special to women and distributes them some, although very little, power and authority in the household. Aristotle’s teleological principle, which claims that everything in the world has a purpose to fulfill, aids in the recognition of women and their roles in society but solely from a reproductive basis. These necessary virtues of care and affection are apparent in women from their natural purpose of being a mother, for they allow the good care-taking of the offspring and enable an essential learning environment where they can practice the virtues of friendship, love, and affection (Kraut 2018). Moreover, these virtues that are necessary to be learned for eudaimonia are passed down from mother to child in a household setting. It is apparent that women have positive attributes that are special to them and these virtues are required to reach flourishing; however, women are confined to the borders of domesticity within the polis because they are thought to have no natural capacity to obtain other virtues. Aristotle argues that flourishing is enabled through learning and practicing virtues, however, dictating only a domestic role for women, resists women’s contribution to the state to reach eudaimonia. In reality, women intrinsically carry some virtues thus have fewer to learn and practice to reach eudaimonia, putting them a step ahead and makes them perfect candidates for political activity.

Furthermore, women have a certain amount of governance in the household but not autonomous on the rule over it. A woman’s decision-making capacities can be utilized “to preserve” what the men earn, mainatining the household as self-sufficient and suitable for virtuous activity (Aristotle 1981, 182). Thus, by logical thinking, women can be trusted with some level of authority and can make decisions for the betterment of the household. This then poses an argument against Aristotle’s exclusion of women from the political sphere, for if women are reasonable enough to be trusted with some autonomy in the household, there is no solid barrier disabling them from pursuing political activity. Overall, women inherently have virtues such as affection and care which puts them at an advantage for reaching eudaimonia, and they are given some authority over the household to preserve it. Both of these aspects enable women to participate in politics instead of disabling them.

Aristotle structures the women’s place solely inside the household and justifies the exclusion of women from the political realm. Firstly, Aritstotle compares between male and female that “the former by nature is superior and ruler, the latter inferior and subject.” (Aristotle 1981, 68) Using naturalism to understand the working of the world, Aristotle conveys the existence of dualities that govern one another. The soul has governance over the body, and reason has domination over the soul. Through this natural hierarchy, Aristotle concludes that women are inferior beings who cannot participate in political activity because of their shortcomings in reason. He believes that the “deliberative faculty in the soul” is present in a female “but ineffective”,(95) thus not qualified for politics that requires reasoning and virtues. However, as argued above, women have some decision-making responsibilities to preserve the household which shows women’s reasoning and rational thinking to participate in the decision-making process for the common good. Furthermore, Aristotle’s claim that political activity should be exclusively carried out by reason is not feasible. Human beings are inherently prone to having emotions that invade their judgmentl. Many historical wars, such as the Trojan War, have been the result of selfish male emotions to establish dominance, leading to the destruction. Thus, to assume that women are the only ones that get affected by their emotions is far from being accurate and convincing to exclude them from the political realm.

Secondly, Aristotle (1981) argues that in order to participate in political activity a person has to be impartial to disassociate with personal matters as soon as they step to work at the state level. In “right forms of constitution, which aim at the common good”, impartiality is wanted to ensure that people do not work for their own self-interests but the common good. (214) Women cannot be impartial because they are too intertwined with their emotions with strong attachment to their offsprings and families, too partial to work for the benefit of the whole. However, humans are instinctively tribalist and this fact is not dependent on gender. Humans have been living in tribes since their existence and continue to do so, even if tribes become to be known as families. This instinct drives them to favour their own over any other, therefore posing a threat to impartiality. Unlike Aristotle’s claim that men can be impartial, it can be argued that due to basic human nature, no human being is capable be truly impartial; thus political decisions, made by human regardless of gender, will carry varying degrees of self-interest and partiality in them.

Furthermore, as a matter of fact, the world which is increasingly becoming more hostile and self-centred would be better off with the inclusion and representation of virtues such as care and nurture. Thus, when women are included in political activity, it is possible to see a heightened sense of interconnectedness in society.leading to “better treatment of others” and increase of the living standards of all (Norlock 2019), with lessened dangers of separation and segregation. With a sense of responsibility and care over others, people will act more in the interest of the common than pure self. Therefore, women should not be coerced into domesticity because of these virtues but should be encouraged to participate in politics. Furthermore, care and nurture employed would incentivise people to work for the common good of the whole as Aristotle wants, thus, to be the all-provider for its citizens to reach eudaimonia, the state should allow women’s contribution to the welfare and the environment where people can flourish. Looking at the interpersonal level, feminist care ethics also argue that these virtues are a better way to sustain moral relations between individuals rather than an abstract model of impartiality (Norlock 2019).

A woman’s place in Aristotle’s polis is limited within the household, although he acknowledges special virtues that women possess that are needed for child-care and the running of the household; he does not think that these virtues can benefit the common good. However, these virtues do not hold women from reaching eudaimonia but rather give them a headstart. Furthermore, the ideals of pure impartiality and reason over emotion are not universally feasible concepts. Therefore, these are not strong arguments for the exclusion of women from political activity. Lastly, these feminine virtues are strongly needed for the betterment of societies.

The author, Sumru Nur Elden, is a student of the Department of Government at the London School of Economics and Political Science. Her blog is an edited version of her submission to the GV100, Introduction to Political Theory course, at LSE.