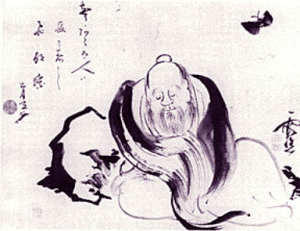 Zhuangzi and Plato seem to hold radically different views on politics: while Zhuangzi is generally considered to be libertarian or even apolitical, Plato’s ideal state is strictly ruled by educated elites and often criticised as totalitarian. In this essay, I will argue that Zhuangzi would agree with Plato’s idea that the ideal rule is the philosopher’s rule, but that he would fiercely resent nearly all Platonic conceptions of it; his ‘philosopher’, dismissive of active interference in politics, is starkly different from the elitist intellectual Plato conceives. Ultimately, the Zhuangzian solution to politics is not political interaction, but philosophical inspiration.

My interpretation of Zhuangzi’s view on politics is based on the cruciality of the Daoist conception of non-action (无为) in his thoughts. I first examine the conversation between Confucius and Yan Hui and argue that Zhuangzi’s point is not that the philosopher should not be in politics, but that he/she should not actively interfere with it. I will then further discuss the Zhuangzian political ideal and show that it does indeed point towards a rule of philosophers. However, I will go on to elaborate how Zhuangzi’s ‘philosopher king’ differs radically from Plato’s.

In the Zhuangzi, a fictional dialogue takes place between ‘Confucius’ and Yan Hui (I use ‘Confucius’ to distinguish the fictional character from the historical figure). Yan Hui plans to travel to Wei, because it is in chaos due to the bad governance of its young ruler, whom he wishes to remonstrate. However, ‘Confucius’ warns Yan Hui that he will only get himself executed. It is not only dangerous to “appear before a tyrant and force him to listen to sermons on benevolence and righteousness” (Zhuangzi and Watson 77), as ‘Confucius’ suggests, it is also useless: Wei would not be in chaos if its ruler is willing to take good suggestions, and if the ruler is not open to suggestions, Yan Hui can achieve nothing.

According to some interpretations, this conversation represents Zhuangzi’s view that Yan Hui should not get involved in the politics of Wei. However, I argue that this is a partial reading: the conversation really aims to show how Yan Hui can be in politics while following the Way (道). ‘Confucius’ does not really reject Yan Hui’s being in politics itself, but instead warns against Yan Hui’s original mindset. It is dangerous and useless to remonstrate the ruler with all his moral indoctrinations, hoping to reform politics according to some ideal. In fact, Zhuangzi’s ‘Confucius’ is rejecting the Confucian approach to politics, because it is against the crucial principle of non-action.

Since Laozi, the Daoists have always rejected action (为) and championed non-action – active actions are ineffective and would cause harm, while non-action is in accordance with the Way. As per the interpretation of Guo Xiang, the collector of the Zhuangzi, to follow nature is ‘non-action,’ while all artificial/civil desires and changes belong to ‘action.’ ‘Confucius’ opposes Yan Hui’s original plan because he believes that Yan Hui has not yet understood the Way and is motivated by fame and glory – all his policies, plans, and teachings are actions that can achieve nothing.

Towards the end of the conversation, ‘Confucius’ points out the path to success to Yan Hui. ‘Confucius’ asks Yan Hui to carry out “fasting of the mind,” so that his mind will be emptied and he will grasp the Way. Only after this, Yan Hui could be in politics without violating the principle of non-action, following the guidance of the spirit (气), and hence he will be free from the dangers and burdens of politics. At this stage, Yan Hui could “make oneness his house and live with what cannot be avoided” (Zhuangzi and Watson 76). This is a direct rejection of the ideal Confucian, who “keeps working towards a goal the realization of which he knows to be hopeless” (Confucius and D.C. Lau 197).

In my interpretation, through this fictional conversation, Zhuangzi does not hope to argue that philosophers should not be in politics, but instead, his suggestion is that one must be a real philosopher to succeed in politics. Politics is useless and dangerous for one who tries to enforce one’s ideal actively or arbitrarily, but a real philosopher follows the Way and is free in politics – just as they are anywhere else.  As I understand, although the principle of non-action means that a philosopher is not obliged to rule or be in politics, Zhuangzi’s utopia would also require a ‘philosopher king’ to exist.

What is Zhuangzi’s utopia, the age of Perfect Virtue, like? The following sentence might be the best summary: “Rulers are like the high branches of a tree; the people, like the deer of the fields” (Zhuangzi and Watson 194). The rulers and the people both merely exist and know each other’s existence, but they do not actively interact. Without active social interaction, there would not arise competitions or civil desires and virtues; this is why in the age of Perfect Virtue “the worthy are not honoured” and “the talented are not employed.” For Zhuangzi, the best form of rule is no active human rule at all, but rather the rule of nature, which follows the Way. Yet, as Zhuangzi repeatedly suggests, it is difficult for a ruler to not be moved by the desire for gains or fame and rest content with mere existence. To refrain from active rule is a greater challenge than any form of ‘good rule’: even the ancient sages Yao and Shun failed in it. Therefore, the ruler of Zhuangzi’s utopia must also be one who understands the Way and masters non-action – a philosopher.

Both Zhuangzi and Plato should then agree with the conviction that “there would be no end to the troubles of states, or of humanity itself, till…political power and philosophy thus come into the same hands” (Plato 192). However, it is crucial to note that their conceptions of the real philosopher and the philosopher’s role as ruler are radically different.  Plato’s Politeia is a perfect meritocracy: education/examinations are the methods that are employed to distinguish the talented from the mediocre, and thus to select the members of the ruling guardian class. His philosopher, then, is simply the wisest member of the educated elites, knowledgeable, trained in reasoning, and thus able to rule. In contrast, Zhuangzi is deeply concerned about the dangers of human knowledge (知), sometimes even treating it as a vice. The true philosopher, for Zhuangzi, has no human knowledge but grasps the Way itself: his/her mind is emptied and is able to “sit down and forget everything (坐忘).” In many examples in the Zhuangzi, those who grasp the Way are not educated elites, but men from lower classes.

In Plato’s Politeia, active governance is pervasive, while true freedom is highly limited: for the purpose of justice, Plato’s philosopher king has nearly unlimited power and entitlement to political expediency. The two most conspicuous features of Plato’s philosopher’s rule are  literary/artistic/musical censorship and the noble lie, both of which represent an attempt to shape or even control citizens’ thoughts. All of these policies, for Zhuangzi, would fall under the category of ‘action,’ which he should firmly reject as bad governance against the Way. Plato’s philosopher actively seeks involvement in governance, and Plato himself went down to Syracuse three times, hoping to realise his political ideal. Zhuangzi, by comparison, declined the offer to become the prime minister of Chu. The critical catch-22 for Zhuangzi is this: once one is driven to ‘action’ by some political ambition, one ceases to be a real philosopher, yet with non-action, the philosopher in minor political roles can have little effect on the reappearance of the age of Perfect Virtue. Therefore, I argue that for Zhuangzi, it is not a problem for the real philosopher to be in politics, but there is no merit to it either. Ultimately, Zhuangzi’s solution to his turbulent time is philosophical inspiration rather than political participation – the king should become a philosopher, but the philosopher should not try to be king.

To conclude, Zhuangzi does not argue that philosophers should not be in politics, but that they should follow the principle of non-action to be real philosophers. Unlike Plato, Zhuangzi’s philosophy does not appear to appreciate the possibility of the philosopher becoming the ‘king’; instead, the rulers must be inspired to grasp the Way. In my view, Zhuangzi’s philosophy clearly avoids the danger of a nearly totalitarian meritocracy suggested by Plato, but his views on politics might not be convincing unless one is already convinced by his metaphysical conception of the Way.

The author, Shunjie Zhao, is a second year Politics and Philosophy student at the Department of Government, London School of Economics and Political Science.