Game-based learning: teaching how to conduct a research project using a board game

Game-based learning: teaching how to conduct a research project using a board game

In January, Dr Kay Inckle was awarded an LTI Grant for her “Game of Research” project. She received funding and help from staff at LTI to design and create a board game to help social science students understand the “essential components for a successful qualitative research project”. Findings from her evaluation of the first stage of this project give us some interesting pointers as to how games can be used to support teaching and learning.

The main aspects of the game are: 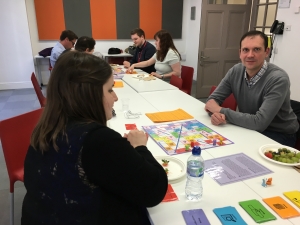 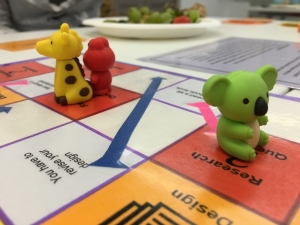 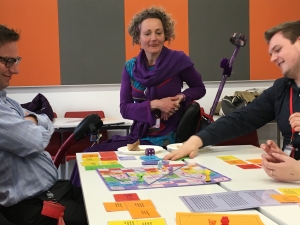 The game was piloted with groups of students, academics and LTI staff. It was also presented at LTI’s Learning Technology Ideas Exchange and attracted interest among academics who attended.

As Kay put it in her report, feedback from both students and staff highlighted the fact that “the game proved to be an enjoyable and effective means of learning about how to conduct a qualitative undergraduate research project”.

Many students identified the activity as being a “fun” way of learning about the key elements in qualtitative research. This was seconded in the feedback from staff: “I think it is a very nice way of presenting a potentially ‘boring’ topic”

The format chosen made it easier to identify and remember the key aspects of a successful research project. The various steps were made clear thanks to the category cards, and the fact that students needed to select a card rather than randomly pick one ensured that “discernment and learning [were] integral to success in the game. ” Even though there is an element of luck, it is not enough to reach the end of the board first. Indeed, if a student reaches the end but some of their cards are incorrect, they return all of the cards to the pile and start again from the beginning. This again reinforces the idea that discernment is key to winning the game/successfully conducting a research project and gives many opportunities to students to familiarise themselves with research methodology.

“it made the issues very explicit”

“it was fun and informative”

The game was also seen as a “creative” and “engaging” way of learning which triggered reflections and discussions among learners. As pointed out in the report, “it was also interesting to see how much the students began to discuss and problem-solve together as the game progressed”.

=> Get in touch with us if you would like to discuss using games and gamification in your teaching.

About the Author: Sarah Ney