As the world awaits the results of the US 2020 Presidential election, here is a repost of a recent piece from LSE’s US Centre’s American Politics and Policy blog on the impact of televised debates. While debates tend to have a limited effect on a presidential election’s outcome, they can nonetheless play an important role in the way that the media frames the campaigns. In new research Lisa Singh, Ceren Budak, Kornraphop Kawintiranon and Stuart Soroka analysed real-time responses of Twitter uses to the first and second presidential debates. They found that the first debate moved users’ support more towards Joe Biden, and that the second debate maintained this support with little improvement for Donald Trump.

Debates are an important aspect of modern election campaigns. Their influence on the outcome of an election may be limited, but they can have an impact on political knowledge and/or perceptions of candidates’ characters and leadership ability. And even as debates may not have a marked impact on outcomes, they are unquestionably an interesting piece of political theatre. They almost certainly influence the way in which media frame a presidential election campaign, either in the days following the debate or more durably.

It is with this in mind in new research we examine the real-time responses of Twitter users during the 2020 Presidential debates. We analyze all Twitter posts containing at least one debate hashtag shared immediately before, during, and after each debate to determine the “stance” or opinion (for or against) of each tweet towards Biden and Trump.

We show two figures below. Each shows the overall proportion of expressed support or opposition for both candidates every minute of the two debates between 8:00 – 11:30pm EST. A score above zero indicates a net supportive stance towards the candidate, while a score below zero indicates a net oppositional stance. Scores range from -1 to +1.

It is worth noting an obvious but important point of caution: Twitter is by no means a representative sample of the US population, and past work has shown the influence of social bots on this platform. That said, Twitter is also full of political commentary by engaged citizens. We thus regard our results as a useful indication of support or opposition that engaged viewers might have felt as they watched the debate and viewed others posts online.

During the hour before the debate began, Twitter users mainly showed opposition to both candidates. At around the 11-minute mark in the debate, pro-Biden expressions began increasing. These expressions continued to increase until the overall stance for Biden became supportive. In contrast, around the same time, stances towards Trump shifted against him and continued downward for the next 10 minutes. These early minutes set the stage for a debate that was a departure from historical debate decorum. Incivility and interruptions were frequent. This early phase also focused on the novel coronavirus—a topic that has been top-of-mind for citizens.

Figure 1 – Stances towards candidates on Twitter in first presidential debate 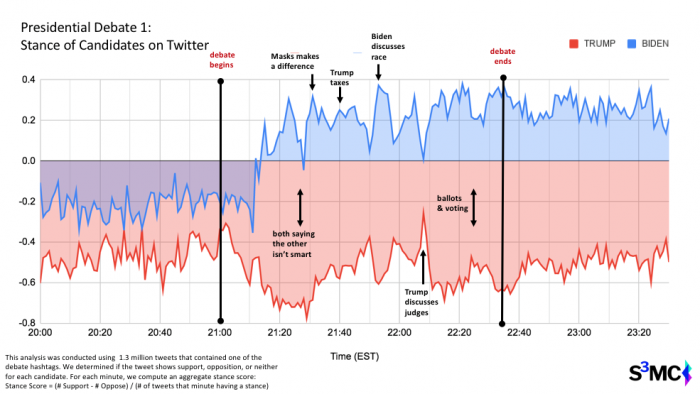 There were specific moments in the debate that appeared to have helped or hurt each of the candidates. When there was perceived bickering, there usually was a decline in stance for both candidates. The moment in which Trump received the most support was when he spoke about judges. Biden’s best moment was when he discussed race relations and the need to support Black Americans.

The difference in pre- and post-debate tweeting about each candidate is striking. By the end of the first debate, the stance of Twitter discussion towards Biden had increased by 0.5, while it decreased by approximately 0.2 for Trump. Biden clearly benefitted from the debate, at least in the short term amongst Twitter users. In contrast, even though there was a good deal of opposition towards Trump expressed immediately before the debate, there was even more negativity towards him at the end of the debate. Overall, the average net stance of Biden during the debate was 0.16 and the average net stance for Trump was -0.55.

In sum, in the Twitter-verse, Biden gained support during the debate, and Trump did not. These Twitter findings are consistent with public opinion polling.  Both CNN and CBS report that the public viewed Biden as the winner of the debate. Given that polls already indicate a debate ‘winner,’ what new information can we learn from these Twitter data?  We suggest that these data make clear the specific aspects of the debate that mattered most. Discussion of the Supreme Court was the only moment of the debate in which Trump appeared to generate some support on Twitter. Discussions of the pandemic, Trump’s taxes, and race all generated increasing support for Biden. 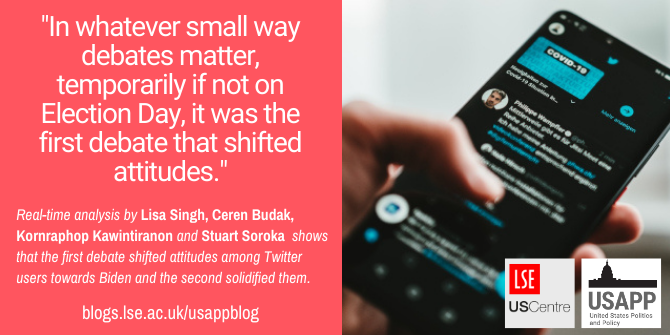 Comparing the second debate to the first reveals marked shifts in stance for both candidates. There were more moments in this second debate in which net stance for Biden was oppositional. That said, there was no moment at which expressed opposition to Biden exceeded or even equaled expressed opposition to Trump. And overall, Biden still had a net positive (supportive) stance, while Trump had a net negative (oppositional) stance, over most of the three-and-a-half-hour period examined here.

Figure 2 – Stances towards candidates on Twitter in second presidential debate 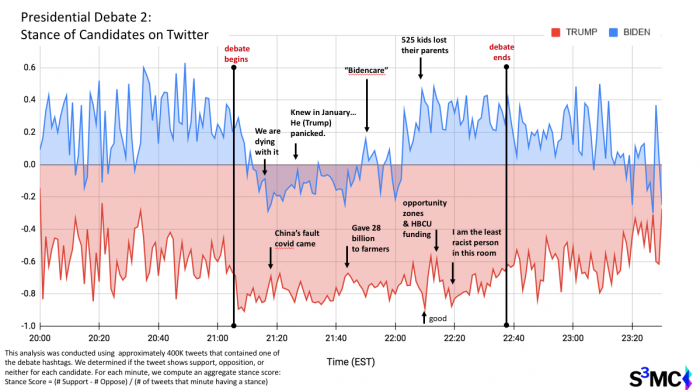 At the beginning of the second debate, Biden’s net stance decreased and remained below 0 during most of the first debate period. The same is true for Trump. This debate period primarily focused on questions related to COVID-19. Unlike the first debate, in which Biden largely benefitted from discussion of the pandemic, Twitter users appear to have been divided during this second-debate discussion. Having said that, opposition to Trump during the first hour of the debate was three to four times the magnitude of opposition to Biden.

There were only marginal and fleeting improvements for Trump for the remainder of the debate. The degree of opposition was reduced slightly when he spoke about giving money to farmers, creating opportunity zones, and funding Historically Black Colleges and Universities. His lowest points came when talking about child separation at the Mexican border, and when he claimed to be the least racist person in the room. The level of support expressed for Biden, in contrast, recovered briefly when the discussion switched to healthcare and his plans for extending the Affordable Care Act (also known as “Obamacare”) with a public option (“Bidencare”), and he then reached durably high levels of support through the discussion of immigration and race relations.

The variance in stance for Biden was greater than for Trump. The difference between the lowest and highest stance for Biden differed by more than 0.7 points, while this difference was less than 0.4 for Trump. One reason for this could be that Twitter users were responding more strongly to Biden’s performance than to Trump’s. It is certainly true that Trump’s performance had only small and intermittent effects on the mostly oppositional commentary on Twitter. Either way, by the end of the debate Biden’s net stance was close to its highest point in the debate (0.26) as was Trump’s (-0.63); but the gap between them is striking.

Trump is an avid user of the Twitter platform, to be sure, but Twitter users active this past Thursday were by no means supportive of the president. By our measure, the debate was a Twitter win for Biden. Again, this finding is consistent with CNN polling about the debate winner. Again, Twitter gives us insight into the topics that were most beneficial for each candidate.

The first debate shifted attitudes towards Biden; the second solidified them

Debates may not have a discernible direct effect on election outcomes, but they are a hallmark of US Presidential elections, and potentially important in framing the way people think about the campaigns. Capturing reactions to debate performances in real time at scale gives us a unique perspective into how different themes and candidate responses resonate with social media users.

What is most interesting to us in these data is the rather different dynamics of the two debates. The first debate clearly produced a shift in support on Twitter for Biden. The second debate largely reflected the distribution of support at the end of the first debate and did not change things much.  This suggests that Trump’s behavior in the first debate was damaging, and Biden’s behavior in that debate was approval-generating. And even as the format change of the second debate made for a more coherent discussion, it did not produce an overall shift in opinion. There were interpretable short-term shifts for each candidate, but no discernable, durable impact. In whatever small way debates matter, temporarily if not on Election Day, it was the first debate that shifted attitudes. The second, if anything, solidified the existing distribution of (Twitter) support.

How we conducted our analysis

This post was republished from the LSE USAPP blog. It gives the views of the author, and not the position of USApp– American Politics and Policy, nor of the Media@LSE blog, nor of the London School of Economics and Political Science.

Kornraphop Kawintiranon is a Doctoral Student in Computer Science at Georgetown University.

Stuart Soroka is the Michael W. Traugott Collegiate Professor of Communication Studies and Political Science, and Faculty Associate in the Center for Political Studies at the Institute for Social Research, University of Michigan. His research focuses on political communication, the sources and/or structure of public preferences for policy, and on the relationships between public policy, public opinion, and mass media.