Last week there were a number of news reports about the harmful effects of social media on the mental health of teens and young people. Responding to this, we are publishing two posts this week that address the topic. The first post was about young people encountering inappropriate content online. This second post by Gianfranco Polizzi looks at the Blue Whale game and digital literacy.

‘Fake news’, as Gianfranco Polizzi explores here, highlights the need for everyone, parents and children alike, to be digitally literate. In light of the viral Blue Whale game, Gianfranco questions the harmful effects of responding to online harm. Gianfranco is a PhD researcher in the Department of Media and Communications at the London School of Economics. His academic background is in international communications studies and his doctoral project deals with critical digital literacy and political participation. [Header image credit:
S. Steuart, CC BY-NC-ND 2.0].

It has been reported in recent weeks that a social media game called The Blue Whale may be a threat to children’s safety in the UK; police forces in the UK ‘have warned local parents that their teenage children may be taking part.’ Begun in Russia, it has been described as a ‘suicide game’, which, after completing a series of tasks, ends with the final challenge for participants to take their own lives. Going viral around the world, news of this game has reached beyond Europe to include Australia, the United States and South Africa, among others.

While 130 teenagers have been reported dead as a consequence of the game, no actual deaths have been linked to it. Not only has the UK Safer Internet Centre ‘failed to corroborate [any alarming] claims’, the fact-checking website Snopes has disproven their authenticity. Although it is a relief that fears around this game have been generated by rumours, what is most worrying is that ‘misinformation about online harm can itself be harmful.’

Who is the most vulnerable here?

Professor Sonia Livingstone, from the London School of Economics, rightly emphasises that, ‘the importance of media literacy to identify and reject fake news is vital for everyone, but especially for parents whose anxieties about their children’s safety make them too easily to fall prey to clickbait designed to trap them.’

The Blue Whale game shows a greater need for parents’ digital literacy, falling under the encompassing term ‘media literacy’. It reminds us that moral panic and public anxiety can spread in the name of boosting children’s resilience to inappropriate content online.

Although news media can be blamed for disseminating panic, parents should learn how to develop critical dispositions towards digital media, akin to those that they can help encourage in their children. Paradoxically, the Blue Whale panic overshadows how dangerous fake news and misinformation are for society, and how important it is to critically consume media content. Digital literacy is essential for everyone, but what does digital literacy mean, and how can we promote it?

Safe engagement online begins with understanding what using digital media entails, which is why research has interrogated parents’ interpretations of internet risks and opportunities along with the strategies they use to mediate their children’s online practices.

Functional digital literacy is a basic layer of the technical, social and creative skills necessary to access, navigate and produce content as well as use social media platforms. While awareness of online safety and security measures is important for adults to be able to engage safely – minimising threats of identity theft, for example – understanding internet-related risks and opportunities is of paramount importance. This helps parents to guide their children, and children to learn themselves how to avoid inappropriate content that can be harmful to their physical or mental wellbeing. While the so-called protectionist approach captures the relevance of digital literacy for protecting minors, consuming content critically by understanding issues of bias, misrepresentation, prejudice and trustworthiness is essential for all.

Moral panic resulting from rumours about the Blue Whale game has not only been illegitimately propagated by news media, but obfuscates how important it is to question authority and information consumed online.

Digital media can be advantageous provided reflective engagement is based on understanding both risks and opportunities. Moral panic about the internet may be detrimental to society at large:

Ofcom’s 2016 findings suggest that 12- to 15-year-olds in the UK are ‘much less likely’ than they were in 2015 to prefer ‘the BBC as a source of true and accurate information’, increasingly relying on Google instead. With 28% of 8-11s and 27% of 12-15s believing that its ‘results can be trusted’, there is a need for greater digital literacy for everyone.

And even the most reputable sources can sometimes be wrong. The BBC, for instance, reported on the Blue Whale game as linked to youth suicide instead of disconfirming fabricated claims, despite providing tips on CBBC (Children’s BBC) Newsround, where the BBC give advice for spotting fake news. Although it may be challenging to tell if a website is credible, comparing media platforms is essential. This practice, however, depends on the user’s familiarity with the biases of various sources. 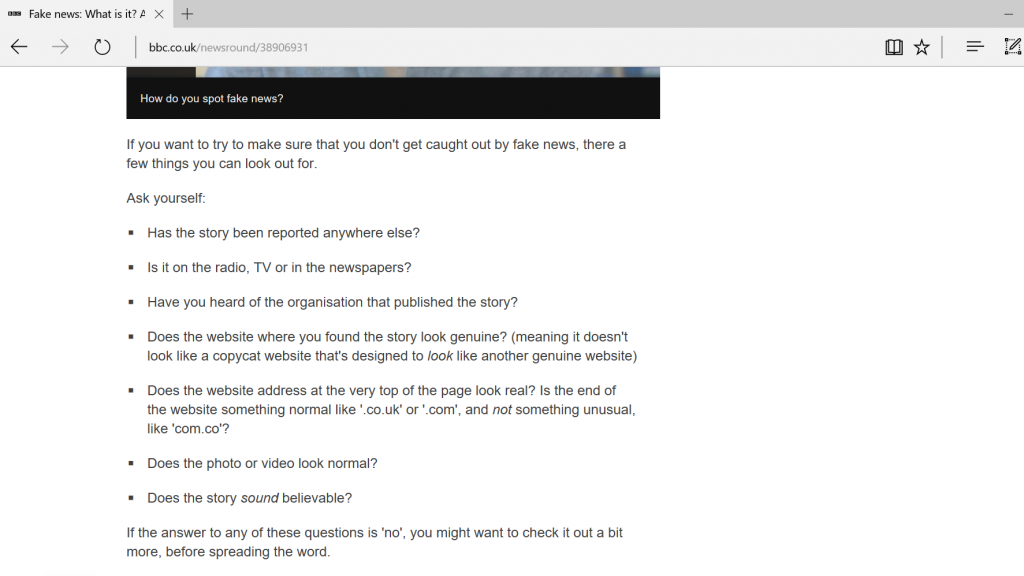 Children and parents must develop awareness of digital media’s risks and opportunities, to enhance their functional digital skills to facilitate safer engagement online. Such awareness may not be about critically understanding content-related issues of power and ideology, but appreciating, for instance, threats of identity theft and inappropriate content. Understanding digital media as technologies embedded within power structures is also crucial, as is our responsibility as citizens to engage reflectively with digital media.

Critical digital literacy should be promoted by educating children, young people and adults about digital media’s transformative, democratising potential, along with the ways in which this potential remains constrained.

As it is challenging to reach adults and parents who are not in an education setting, media literacy for all should be encouraged by creating a dialogue between educators, media industries and institutions. While such a dialogue is central, digital literacy should be:

This incident reminds us that children’s internet safety is important, and that parents’ fears can be exploited. While it illustrates that moral panic can be instrumental in calling for greater internet safety, each party has a different role to play in the process. News media is responsible for checking their sources, and citizens of all ages are responsible for critically interrogating digital media, with an emphasis on digital literacy for all.

Children’s rights and parental responsibilities in a digital world