In this post, Wendy M Grossman reviews two books: First, Screenwise by Devorah Heitner which provides advice on guiding kids through the digital world. Then, Worried About the Wrong Things by Jacqueline Ryan Vickery which urges more focus on the opportunities available to children online. Wendy writes about the border wars between cyberspace and real life. She is the 2013 winner of the Enigma Award and she has released a number of books, articles, and music. [Header image credit: K. Yeznaian, CC BY-NC-ND 2.0]

It’s hard to find anyone talking about children online who isn’t consumed with moral panic and child safety. In the UK, notable exceptions are this Parenting for a Digital Future project, as well as Andy Phippen at the University of Plymouth, and the former teacher Terri Dowty, who for years led Action on Rights for Children. Even Beeban Kidron’s 2013 admirably on-the-streets documentary InRealLife focuses almost entirely on the negative.

Two books from the US take a more positive view.

Screenwise is by Devorah Heitner, founder of Raising Digital Natives, which aims to offer advice to parents and teachers who are struggling to guide kids through the online world. The book is largely practical advice that focuses as much on parent-child relationships as it does on technology. 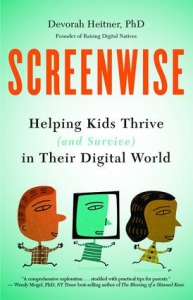 Heitner’s first piece of advice could have been written in friendly yellow letters: ‘don’t panic’. She walks through numerous dangers that children can encounter — not just pornography, but privacy, data-slurping, and plagiarism — and provides common-sense suggestions for dealing with the consequences. A key point she makes is that kids don’t always want the latest technology, and they do want their parents’ attention. As others such as Sherry Turtle have pointed out, parents often focus on their kids’ screen time while failing to notice their own.

Also, while so many focus on the material that kids share with each other, a bigger problem for many children is parental oversharing. Does every embarrassing photo have to go on Facebook so the grandparents can see it? Heitner’s approach of asking your child’s permission before posting their photograph is a good one: not only does it give them control over this aspect of their life, it also offers a model for how your child should treat the privacy of others. 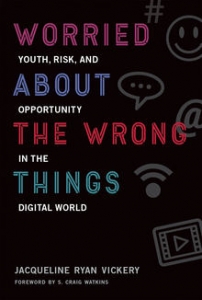 One reason Vickery has that understanding is fieldwork: she and her group of researchers spent nine months in after-school digital media and film clubs at a school she dubs “Freeway High” — a diverse school in central Texas where more than half the students qualify for free lunches and few go on to university. Her work there included weekly interviews with students and additional interviews with parents and teachers; the team also collected observational data. Students like the ones she describes rely more heavily than richer kids on school computers, and the limitations imposed by the filters required by the Children’s Internet Protection Act fall more heavily on them as a result.

Overall, Vickery recommends changing focus from the harms young people may encounter online to the opportunities they may find there. They are — or can be — active participants, she writes, rather than passive victims. As the UK heads into yet another round of “we must protect the children” this is important to keep in mind.

This text was originally published on the ZD Net and has been re-posted with permission.