Given that the book Parenting for a Digital Future was published during COVID-19, Sonia Livingstone was delighted to be invited by Henry Jenkins to compare notes with Meryl Alper and S. Craig Watkins about the issues parents are confronting as they grapple with traditional “screen time” advice at a time when so many everyday activities have gone online. This is how Sonia began their conversation.

This is an extraordinary time for parents trying to ensure their children learn and gain a good education, while also working, and worrying about the family’s income, health and a host of everyday practicalities during COVID-19. Among the problems they need to tackle are how to maximize the opportunities and minimize the risks of the digital technologies they are able to access. Of course, achieving such a balance has long been a concern of parents, but this is hugely exacerbated at a time when, it seems, so much of our daily lives has gone online. This includes, for many, their children’s education, contact with friends and relatives, access to information, and much of their entertainment, all of which are fast becoming digital by default. Also to be contended with is that many commercial and institutional services, including most forms of welfare and support, are now functioning only online, and that isolation is difficult for many, resulting in adverse consequences for mental health.

I’m especially interested in the ways that life online brings its own problems. Digital inequalities are heightened, and lack of meaningful access or digital skills matters more than ever. Reports suggest that online risks of harm of all kinds have increased – from scams and cybercrime to bullying and sexual abuse. Less obvious perhaps but also of growing concern is the fact that life online means ever more of our daily activities and interactions are digitally tracked, with our personal data being collected and aggregated by others and possibly hacked or exploited. COVID-19 is far from the only “digital” problem of the recent period: the challenge of misinformation or false information remains largely unmet, with many parents and children struggling to locate or evaluate reliable information regarding news, learning, health, finances, or other significant matters. All this contributes to a climate of confusion, mistrust, and tension.

On a more positive note, I suggest that this unprecedented turn to the digital has laid to rest some myths that have undermined parents in recent years. Three myths have been of particular concern in our research on “Parenting for a Digital Future.”

The first myth is that “screen time” matters. In fact, the demise of screen time had already been announced by a series of high-level expert pronouncements, including from the American Academy of Pediatrics who originally invented and promoted the notion of screen time 30 years ago. Reviews of the available evidence have been increasingly critical of the quality of that evidence as well as the conclusions popularly drawn from it, that namely that what matters is the amount of time children spend with one screen or another rather than the quality of the content that they engage with, the context in which they watch, or the social connections that mediated engagement makes possible.

As we found our in-depth qualitative research with parents, even though the academics and other experts were voicing doubts, for parents, screen time has been a rod for their backs, a source of conflict in its own right, and a source of guilt and shame regarding their parenting practices and their seeming laxity in “controlling” or, worse, “policing” their children’s activities. But since COVID-19, the mass media and public opinion has radically shifted, and it is at last acknowledged that technology, perhaps like books or bicycles, can be good or bad for children, depending on how they are used and by whom.

The second myth that my research contradicts, and that I believe we now should lay to rest, is that parents know nothing about the digital world and the children know everything. The idea of digital natives and digital immigrants. This idea has been extraordinarily successful, and it has had the advantage of recognizing that, perhaps for the first time in history, children genuinely have knowledge of value in the wider society, well beyond the small private sphere in which they are often sequestered. But it also had two adverse consequences.

Third, it has been often said in recent years that young people prefer the online world to the offline world, that they would rather talk to their friends online than engage with a person in front of them, and there is no natural limit on their desire to go digital. Life during COVID-19 has clearly proved the falsity of such a myth. For young people as for the rest of us, the task of balancing online and offline remains critical and difficult, and the value of seeing friends face-to-face, of going out into the world, into the community, and engaging there freely with others, is as vital to them as for everyone. The “COVID generation,” so-called, is becoming angry, let down by the generations in power on this as in other matters. We may expect them to take increasingly to the streets, and to digital public spaces, as the actuality and perception of generational injustice grows.

You can read the rest of the conversation here: Unequal Struggles and Impossible Digital Choices for Parents During COVID19 – Part 1, Part 2 and Part 3.

A version of this text was originally published on the Confessions of an ACA-fan blog and has been re-posted with permission. This post gives the views of the authors and does not represent the position of the LSE Parenting for a Digital Future blog, nor of the London School of Economics and Political Science. 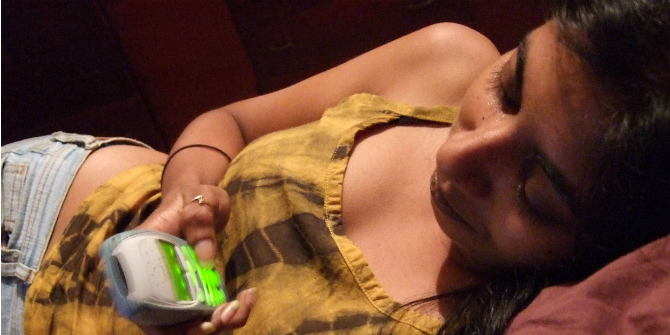 Why you should talk to your children about Cambridge Analytica