The English are 85% of the UK’s population, with London home to a population equal to that of Scotland and Wales combined and an economy that makes up 22% of that of the UK. As Tim Oliver argues, analysing how the English and how Londoners view the EU concurrently is therefore vital to understanding how the UK will vote in the forthcoming referendum and how many different parts of Britain will deal with the outcome.

Back in January 2013, when David Cameron committed a future Conservative government to holding an in/out referendum on the EU membership, he made clear that ‘it is time to settle this European question in British politics’. Today, one of the problems Cameron faces is that his European question is a multifaceted one that is more than to be or not to be in Europe. Look into what fuels the UK’s tensions with the rest of the EU and you soon find yourself grappling with such questions as the future place in the UK of both England and London. Because of its size it will be in England where the referendum is largely won or lost. As the capital city and the UK’s biggest and richest region, what the result could mean for London will be a defining issue of the campaign and how the UK deals with the result.

A closer look at the Union

Breakdowns of the UK’s regional political differences often divide the Union into its four parts. The four may be equal constitutionally, but nothing could be further from the truth when it comes to population and economy. As the Scots, Welsh and Northern Irish know only too well, England dominates the union of Great Britain and Northern Ireland.

*UK Regions and Nations: Populations, Gross Value Added, and Public Expenditure per head around the UK in 2013 and 2014 (source here)

Furthermore we rarely see breakdowns of opinions across England. This is despite 54.3 million English inhabiting a country home to a wealth of cultures, economies, and political outlooks. To be fair, the Scots, Welsh and Northern Irish are not single homogenous groups. But the debate sometimes risks overlooking differences within the English public opinion. Data (albeit to 2012) drawn from the British Election Study Continuous Monitoring Survey shows that support for the EU can vary across the UK and England.

*“Overall, do you strongly approve, approve, disapprove, or strongly disapprove of Britain’s membership in the European Union?”

Amongst the many differences that criss-cross England, London can make a fair claim to being so different as to be the UK’s undiscovered country. It has its own regional government in the form of the Greater London Authority and a Mayor. Its population will within a few years pass the 10 million mark, and if measured by metro area already stands at more than 14 million. That population is also Britain’s most diverse, with 36.7% Londoners born outside the UK, a figure that is growing. Such a fast growing and diverse population makes for distinct social and welfare challenges in terms of housing, policing, the environment and transport. Its economy – 22.6% of all of the UK’s generated by 13.1% of the population – races ahead of the rest of the UK and makes it one of the richest places in Europe and the world. As the BBC’s Robert Peston once argued when explaining why UKIP doesn’t do well in London:

Much of the rest of the UK sees globalisation and its manifestations – such as immigration – as disempowering, impoverishing and a threat. Whereas for Londoners, globalisation is an economic competition they are apparently winning.

London then is an English, British, European and international metropolis, booming thanks to its central place in the UK, Europe and the world.

The English question and Europe

Despite people across the UK sharing some common concerns about the EU, polling data shows the English as a whole to be the most Eurosceptic of the four parts of the UK. No surprise then that UKIP scored well in large areas of England during the 2015 General Election, securing 14.1% of English votes and becoming the UK’s third most popular party by votes. It should also be noted that UKIP secured 13.6% in Wales, reminding us that other parts of the UK are not the home of pro-Europeanism as some might like to believe they are. Nevertheless, compared to the 1975 referendum when England was home to the most pro-European parts of the UK, today it is undeniably home to the parts that are the most Eurosceptic.

This can be put down to a number of reasons, not least of which is the failure of political parties in England, compared to those in the other three parts of the UK, to offer a pro-European message. It can also be attributed to the failure of the political parties to grapple with changes in English identity, with there being an often-noted connection between Euroscepticism and English nationalism. As Ben Wellings has argued: ‘Euroscepticism is the most formed-up expression of English grievance and an ideology that provides the political content for English nationalism.’

Surveys and analyses have shown an evolving sense of English nationalism is connected to feelings about an unfair treatment of England compared to Scotland, Wales, Northern Ireland and London. With no English Parliament or substantial regional governments of its own (excluding Greater London), England is run by a UK government based in London that can seem distant and beholden to other interests whether they be international ones or of the other parts of the UK. UKIP has been able to tap into this.

The European question in some areas of England is therefore not simply one of distrust of globalisation or the EU; it is also about negative views of a UK state and political parties that can seem weak, disinterested or beholden to others.

The London question and Europe

Londoners are not known for being ‘little Englanders’. This is in no small part a result of Londoners being the least ‘English’ in England and the most likely to identify themselves as ‘British’ (according to the 2011 census). Its diverse population, economics and liberal politics make it a metropolis where parties such as UKIP struggle to make much headway. In the 2015 General Election UKIP secured 8.1% of Londoners votes, an improvement on its previous results but still its second lowest performance in the UK after Scotland. Nevertheless, UKIP has found success in some of the outer boroughs, especially in the east. That London suffers from major social, economic and community problems was all too clear during the 2011 London riots. While immigration is an issue, since the 1980s immigration has been key to the metropolis rebounding from its post-war decline. London’s Eurosceptic Mayor, Borris Johnson, has been amongst the UK’s most pro-immigration politicians.

A large part of the material wealth of London is tied to the economic vibrancy of the European market as part of wider transatlantic and global markets. Britain might not be in the Euro, but that does not stop London handling more euro foreign-exchanges than the Eurozone combined. Nor does it stop London being the headquarters of one hundred of Europe’s top 500 companies. Companies such as Goldman Sachs and the Lord Mayor of London have warned of the cost to London and the UK of an exit from the EU. The Mayor of London’s own 2014 report into Brexit and London – ‘The Europe Report: a win-win situation’ – might have argued that whatever the referendum outcome, London could win in varying ways (although see here for a critique). But even it made clear that close relations with the EU would be vital for any post-exit London.

London’s more pro-European outlook, its privileged position within the UK, unique population and identity have not passed unnoticed. ‘London’ has become a by-word for something that is distant, strange and out of control, similar to Brussels across the EU or Washington D.C. in the USA. While London has long been a place slightly apart from the rest of Britain, today people across the UK, and especially England, increasingly view London as a place far removed from the country they feel they inhabit. Suzanne Evans, a former Conservative councillor for Merton who defected to UKIP but lost her seat in the 2014 local elections, blamed UKIP’s poor performance in London on its young, educated, cultured, media-savvy population that can’t understand the heartache felt by the rest of the country. This might have been picked over for her insinuation that UKIP supporters elsewhere are old, not educated (to a certain extent Londoners are indeed younger and on average better qualified) or cultured and that the ‘media-savvy’ were somehow duped by media criticism of UKIP. But her warning that London is becoming a place apart from the rest of the UK has been echoed elsewhere. The EU referendum has the potential to highlight the differences between the capital city and its country and the need for this to be addressed.

A kingdom of many parts

There can be little doubt that the UK’s referendum could have important implications for different parts of the UK. Most notably, Scotland’s place in the union and the Northern Ireland peace process could be changed. But by focusing on such areas we are at risk of missing the larger picture of what the result could mean for the place of England and London in the Union. It will be in England that the referendum is won or lost, and it will be in London and its relationship with England and the UK that we will see some of the most important consequences of the referendum result.

Note: This article originally appeared on BrexitVote. It gives the views of the author, and not the position of the London School of Economics. Featured image credit: Public Domain 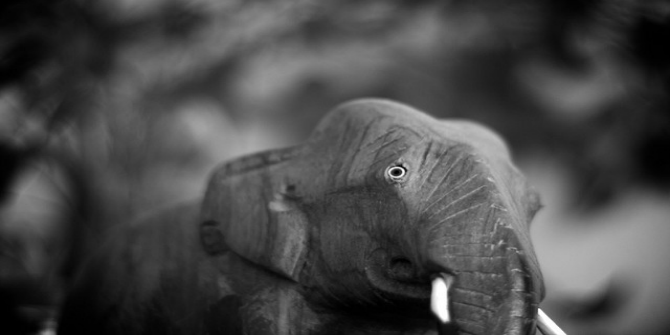