Adrian Pabst recently argued on this blog that Labour has become disconnected from blue-collar voters, with it’s rhetoric and policy appealing to an increasingly narrow segment of the population. He suggested that the ‘Blue Labour‘ movement offers a way forward to address this issue. Here, Ben Margulies responds with a counter to this argument, suggesting the way forward is not to be found in the Blue Labour idea, which he argues is a conservative and backward-looking agenda.

Please note: A response by Adrian Pabst to this piece is available here.

With the end of the recent Labour reshuffle, the party shows signs that it is returning to the wider debate about its electoral and demographic futures. On one side, there are the groups, once represented by Labour leadership contender Liz Kendall, who find Labour’s defeat in its failure to reach out to centrist voters, lost to the Conservatives. On the other hand, there are those who argue that Labour cannot win without offering a clear, left-wing alternative to the Conservatives, represented by the new leader, Jeremy Corbyn.

Running slightly perpendicular to this broader debate is a project called “Blue Labour,” the subject of a recent post on this blog by Adrian Pabst, co-editor of the book Blue Labour: Forging a new politics. According to the associated website, Blue Labour “blends a ‘progressive’ commitment to greater economic equality with a more ‘conservative’ disposition emphasising personal loyalty, family, community and locality.” Put in terms of “cleavages” (as we academics do), it is left-wing on the socioeconomic divide, but socially conservative and collectivist. For me, this immediately brings to mind supporters of UKIP. As a Compass report in 2014 succinctly put it: “Whilst many UKIPers are socially conservative on issues like gay marriage, many stand well to the Left on socioeconomic issues.”

Pabst goes into more detail about Blue Labour’s values and target audience. He criticises New Labour for their full-throated embrace of a neoliberalism that has impoverished and frayed working-class and lower-income communities across the United Kingdom. He charges Labour’s centralism and free-market leanings with eroding community organisations and unions. He attacks “Labour’s metro-liberal identity,” claiming it has alienated the old working class, “emergent service workers (bar staff, carers, call centre workers)” who want to start their own businesses and own their own homes. These voters detest the party’s “disdain for patriotism and its endorsement of a social allocation system which, as [Birkenhead MP Frank Field puts it, ‘favours the newcomer and the social misfit’ over the vast majority who contribute and play by the rules.” There’s no left-wing majority, Pabst says: votes for the Conservatives, UKIP and the DUP outnumbered those for Labour, the Lib Dems, the SNP, Greens and Plaid Cymru (which is technically true – 50.1 per cent to 47.4 percent on a 66.1 per cent turnout). Labour has no future according to Pabst, if these voters continue to see in Labour “the party of the liberal elites plus public sector workers and minorities.” 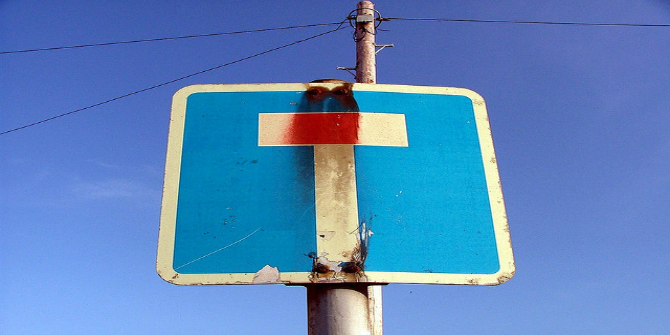 I can see where Pabst is coming from. In the days of mass union membership, Labour was the party of the unions, and its cohesion around a social democratic platform meant it could encompass the socially conservative in its coalition. But the idea of Blue Labour doesn’t correctly outline what happened to these working-class communities, describe their traditional values correctly, nor acknowledge that Labour has tried to reach out to them several times, and failed

Let’s start with the idea that Labour abandoned its working-class voters. Yes, it’s true that Labour embraced Thatcherism to a wide degree under Blair, and did nothing to resurrect the labouring communities of their historic past. But Labour did not author the decline of the British working classes; long-term economic change, the global rise of neoliberal economic thinking (especially around free trade and movement of capital), social fragmentation and Margaret Thatcher all played their role. These communities and their organisational capacities declined over decades.

Pabst conflates these working-class voters with Kendall’s aspirational voters. In short, they are waged workers who want to accumulate capital and move into the middle class. This is a rather shaky claim. Working-class voters had strong communities precisely because they expected to hold a secure waged job in a waged industry throughout their working life, before passing them on to their children (or, at least, their sons). Former mining communities are depressed and angry precisely because they lack both the means and the inclination to be “aspirational” in the way Kendall wants – those values were Thatcher’s, not Old Labour’s.

Arguing that New Labour, and the Miliband-era party, were somehow insensitive to social conservatism is also inaccurate. Tony Blair was “tough on crime, tough on the causes of crime,” and had created more than 3,000 new criminal offences by 2006. His government cracked down on asylum-seekers. Miliband repeatedly offered controls on immigration (remember the mug? The Edstone?). It got Labour nowhere. Even the Conservatives have had little luck regaining socially conservative voters; it was Cameron who offered the holy grail of a referendum, only to see UKIP go from strength to strength. David Goodhart, a leading light of Blue Labour, talks about Labour “find[ing] a new set of leaders who connect culturally with the country it aspires to rule,” but without some sort of organic, organisational link to these communities, any “Blue Labour” initiative will fail completely.

Most worrying is Pabst’s statement about Labour being the party of “the liberal elites plus public sector workers and minorities.” The first two categories would naturally encompass Labour’s existing middle-class support, which, as Jon Trickett noted, remained stable in 2015. Presumably, Labour wants to keep these voters. The comment about minorities is alarming for two reasons. Firstly, said minorities are a growing part of the population; no serious electoral strategist could dismiss them so lightly, whatever his or her thoughts about communitarianism. Secondly, praising working-class “communities” as separately from “minorities” creates an implicit assumption that one is somehow more genuinely Labour, or even genuinely British, than the other (It also ignores the fact that there are plenty of ethnic minority working-class people – the iconic Grunwick strike in 1976-1978 involved a mainly South Asian workforce). The similarities to UKIP, and right-wing populism, are obvious and very unattractive. Is that a path Labour really wants to embrace?

Finally, Pabst makes two more errors, this time of omission. The first is his analysis of the electorate. He is correct that right-wing parties won a majority of votes. However, he did not mention that turnout was only 66.1 per cent. It was younger voters who did not turn out, and Labour’s score would have been much improved if they had, because Labour won those age groups. Blue Labour’s analysis shares the same blind spot as Kendall’s: it assumes the electorate that voted in 2015 is the only electorate, ignoring both the third of registered voters who abstained and the fact that the 2020 electorate will have new waves of young voters and fewer members of older working-class communities. Pabst forgets a cardinal fact of left-wing politics: high turnout is a good thing. Ask Justin Trudeau.

The other error is among the most common in British politics. Pabst largely ignored Scotland, where a socially liberal, civic-nationalist movement dominates politics, and won that dominance by bulldozing the rotten structures of Scottish Labour. The Yes campaign were recording increasing support in working-class sections of Glasgow two years ago, and the SNP was gaining votes among trade unionists. So long as the SNP continues to dominate Scotland, any Labour resurgence will lead to Conservative scaremongering about a Labour-SNP coalition, and this, some studies suggest, will finally motivate those English working-class voters to vote – and they’ll vote Tory. Margaret Beckett’s recent post-mortem of Labour’s defeat also cites fear of the SNP as a cause.

Should Labour try to reconnect with the white working class? Yes, ideally: they are as much in need of a social-democratic political project as they were when Clement Attlee led the Labour Party. But muddled social analyses won’t win English working-class voters back, much less Scottish. And pedalling soft-serve xenophobia won’t help Labour either; it will simply lose the “public-sector workers and minorities” it has now, and at the cost of its soul. The SNP, Trudeau and Obama show that the future of the left lies not in combining social democracy with the communities and values of the past, but those of the future, where we can achieve redistribution and social justice in the more challenging environment of the modern civic, multi-ethnic national community. Blue Labour can no more seize the future by hearkening back to the past than UKIP can, and it shouldn’t try.

This is the second piece in a series of articles on ‘Blue Labour’. The initial piece, ‘Blue Collar voters and the Left: Labour must reconnect with those it left behind’, can be found here. The critique of the article, which you have just read, has its own response which will be available tomorrow.