The European Commission has proposed a quota system for distributing the responsibility for asylum seekers across EU member states. Mollie Gerver writes that while the principle of refugee quotas has generated opposition, a quota trading system, in which states can sell all or part of their quotas to other states, could offer a solution. She notes that although there would remain reservations about such a system, it would ensure that states who accept disproportionately more asylum seekers are compensated for doing so, while those who accept fewer pay for the privilege.

There is a detention center in the Nafusa mountains, 100 miles from Tripoli. In it sit thousands of asylum seekers from Eritrea, Sudan, and other countries of origin. Like in Libya’s other detention centres, none of the inmates can apply for refugee status. Abuse is common, including whipping with rubber strips of tyre, electroshocks, and being hit in the head and torso.

Some will remain in detention, others will face possible deportation, but many more will bribe their way out, living without legal status in Libya. Some will manage to raise money to get on a boat for Europe, some will die on route, but others will reach Italy or Malta. In 2014, 130,000 made it across the Mediterranean, overwhelming the Italian and Maltese asylum systems, which lacked the ability to efficiently process so many new requests for refugee status.

Jean-Claude Junker, the President of the European Commission, has raised the possibility of a refugee quota system for EU states. Under such a proposal, most asylum seekers who reach Europe will not stay in the country they first reach, but will be relocated to other EU member states. Countries with greater GDPs, populations, and lower unemployment rates will need to accept a greater number of asylum seekers. Each country will then interview its allocated asylum seekers, determine if they are refugees, and provide them with residency if they are.

The Commission’s plan would require, for example, that France take in roughly 14 per cent of the total number of asylum seekers that enter the EU, but Malta less than 0.7 per cent. For illustration purposes, imagine that the EU were to relocate the 626,000 asylum seekers who entered the EU in 2014. In reality, France only accepted roughly 60,000 of these claims, or around 9.5 per cent of the total number. Under a quota system, France would be required to accept 87,000 asylum seekers. Malta would need to accept only 4,300, fewer than the 8,460 asylum claims it received in 2014.

In addition to relocating asylum seekers who have already reached Europe, the EU would also fly in an additional 20,000 refugees who are currently in third countries, including in Libya, and these asylum seekers will also be resettled throughout the EU using a quota system. The proposal also calls for funding to third countries, including Libya, to strengthen their borders and asylum systems, so that refugees are settled locally, to prevent onward migration to Europe.

This proposal has the potential to fulfil three important goals for the EU. It can help distribute burdens equally, so that countries like Spain and France, who currently host fewer refugees per 1,000 inhabitants, contribute as much to refugee protection as Italy, Malta, Austria, and Sweden, who host far more refugees. The goal also seems to be to better protect refugees. It provides 20,000 refugees with the option of being flown into Europe, avoiding a dangerous smuggling route over sea.

It also helps refugees who do manage to reach Europe by boat. Today, asylum seekers can remain months or even years in detention in Italy and Malta, waiting for their claims to be heard. Distributing asylum seekers equitably could reduce the backlog. Finally, at least in theory, the proposal will prevent more migrants from reaching Europe. It both strengthens Libya’s ability to prevent migrants from traveling to Europe, and gives refugees one reason to stay. If they wait in Libya, they may be chosen as one of the 20,000 eligible for voluntarily resettlement in the EU.

Though there are benefits, states with fewer refugees, such as Spain and France, oppose the proposal, citing the challenges they would face in taking on more refugees than they currently do.

A quota-trading mechanism may persuade more policymakers to accept a quota system. Under such a mechanism, states would be able to sell all or part of their quotas to another EU state. For example, France could avoid accepting all 87,000 of its quota by paying money to Malta, who would accept all or some of these refugees. Malta would then have more than 4,300 asylum seekers, but would also have more funds to make up for the “burden” of accepting more than its quota. However, for a quota trading mechanism to work, four concerns must be addressed.

There is, firstly, an ethical concern. Some may object to a quota scheme on the grounds that it ‘commodifies’ refugees, rather than respecting their rights. French Prime Minister Manuel Valls has rejected a quota scheme using this logic. “Asylum is a right”, he stated, and so “cannot be subject to quotas”. However, there are many rights that are subject to quotas. One has a right to healthcare, but patients must go to the hospital where they are allocated an appointment, as each hospital has a specified amount of patients it can afford to provide treatment to. We would not find it objectionable for a hospital to pay another hospital to treat one of its patients, if it felt it simply lacked the capacity to do so.

A second concern, of a more empirical nature, is that it is not clear that trading quotas would distribute costs fairly. Were France to pay Malta a very large amount of money to take some of its asylum seekers, the money may still not be enough for Malta to process all claims in an efficient manner, forcing asylum seekers into detention facilities in Malta until their claims are heard.

Another potential worry could be that if a country is paid or required to process an asylum claim, they may refuse to recognise these asylum seekers as refugees, even if they merit this status. The more money a country receives to deal with claims, the greater the incentive for it to process more claims in a shorter period of time: potentially rejecting claims quickly, agreeing to process more, and then rejecting these still. This is especially worrisome for countries, such as Spain, who have a history of abusing refugees and asylum seekers. Other states may accept refugees, but generally deny permanent residency or likely paths to citizenship, as in Germany.

A final concern relates to EU funding for immigration control in third countries to prevent onward migration to Europe. Some of these funds go to detention centres, including the one in the Nafusa mountains. The Libyan government is paid to keep refugees within its borders so that they do not reach Europe, but there is little genuine protection: a key EU goal.

When the EU funds third countries, this may also encourage refugees to try and reach Europe, undermining the EU goal of securing its borders. Though detention in Libya may seem to prevent individuals from getting on a boat to Italy, it may also encourage them to try: paying off guards to escape detention, and then smugglers to escape the country. Even if over 20,000 migrants died at sea over the last two decades, and 3,000 in 2014, it is likely that many more died within Libya, including in detention. Some refugees may be attempting to cross the Mediterranean to escape the very conditions created to prevent them from reaching Europe.

For a quota mechanism to ensure refugees are protected, it must guarantee that EU states do not reject asylum seekers with strong claims to refugee status. One solution would be to create a separate EU body for processing all asylum claims. However, such a body may face political pressure to reject claims because every state would need to accept a proportion of them, thereby ensuring every state has an interest in their claims being rejected. This is not a definitive reason for opposing quota trading, but rather a reason to make certain that the process for determining who is a refugee is especially strong and unbiased.

Furthermore, to guarantee refugees are protected in a trading scheme, no state should be able to pay another state to accept refugees for less money than the cost of processing claims. For example, if France were to pay only 150,000 euros to Malta to take in 87,000 asylum seekers, this would leave Malta with less than 2,000 euros to process each claim and help them locally integrate. If 2,000 euros per asylum seeker is insufficient to provide protection, then this trade should not be permitted.

Finally, payment schemes should not be extended to third countries outside of the EU who have failed to provide refugee protection. Funding detention centres in third countries may fail to protect refugees, and encourages onward migration to Europe.

Ultimately, some may still object to a quota mechanism. If migration is a right, we may struggle to see how it can be subject to quotas, especially ones that are traded and therefore commodified. However, quota trading needn’t be a commodification of rights, but a way of distributing costs. It would ensure that states that accept disproportionately more asylum seekers are compensated for doing so, and those who accept fewer pay for the privilege.

Note: This article originally appeared on our sister site, the LSE’s EUROPP blog, and gives the views of the authors, and not the position of the British Politics and Policy blog, nor of the London School of Economics. Please read our comments policy before posting.

‘The taxpayer’, being young in Briton and ‘Civic Capitalism’: Top 5 blogs you might have missed this week 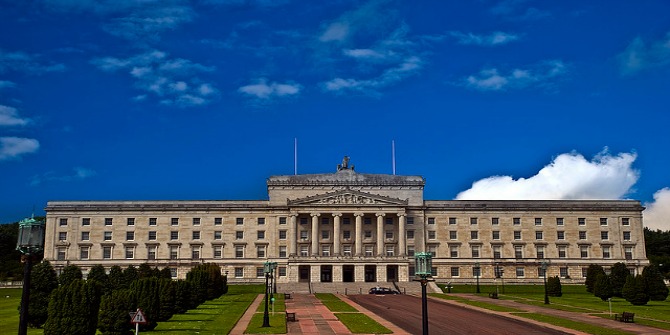