Debates over policy relating to immigration and ethnic diversity in the UK are highly charged and ideological. Many argue that immigration harms social cohesion because it increases the level of ethnic and racial diversity in local communities, which serves in turn to drive down trust and erode norms of reciprocity and cooperation. In contrast to the vast majority of existing investigations, Patrick Sturgis, Ian Brunton-Smith, Jouni Kuha and Jonathan Jackson found that residents of more ethnically diverse neighbourhoods actually reported higher levels of community cohesion than those who lived in less diverse areas, once levels of economic deprivation and segregation were controlled for.

The social and economic consequences of mass immigration have risen in prominence in recent years. For some, immigration is essential for maintaining economic competitiveness and supporting a vibrant, progressive and culturally dynamic society. For others, immigration is seen as a threat to the economic opportunities and living standards of the indigenous population, as well as being damaging to the social fabric of local areas.

Influential commentators from both the left and right have argued that immigration harms social cohesion because it increases the level of ethnic and racial diversity in local communities, which serves in turn to drive down trust and erode norms of reciprocity and cooperation. A good deal of evidence has now been marshalled in support of this claim, with a large number of studies in a range of different contexts finding a negative association between the ethnic diversity of a neighbourhood and the level of trust expressed by individual residents.

Given the highly charged and ideological nature of debates over policy relating to immigration and ethnic diversity, it is essential that the evidence base is as robust as possible and not overly reliant on US-based research which may not generalise to the very different historical context of ethnic composition of neighbourhoods in the UK. Recent research – undertaken by colleagues at the University of Southampton (NCRM Hub), the LSE and the University of Surrey – has provided new insights into this question. If living in an ethnically diverse neighbourhood causes people to distrust and avoid one another, then we should be certain to find evidence of the phenomenon in London – a city which the 2011 census showed has a justifiable claim to being the most ethnically diverse conurbation on the planet.

Data for our analysis were drawn from the Metropolitan Police Public Attitude Survey, which covers a range of topics including police legitimacy, experience of crime, contact with the police, and the social cohesion and disorder in one’s local neighbourhood. After linking the survey data to information from the census and other sources about the ethnic, social and economic composition of neighbourhoods, we used multi-level models to estimate the conditional association between ethnic diversity at the neighbourhood level and individual assessments of social cohesion.

A common limitation of much existing neighbourhood effects research is the reliance on spatial units that do not map well on to peoples’ lived experience of local neighbourhoods. Employing spatial units which are a reasonable approximation to subjective characterisations of ‘neighbourhood’ is important because the mechanisms which are proposed to underlie ethnic diversity’s effect on cohesion and trust are social-psychological in nature. Yet, it is difficult to know a priori exactly what the appropriate spatial scale might be for any particular outcome or mechanism.

To measure ethnic segregation within neighbourhoods, we used Theil’s multigroup entropy index. This compares the ethnic composition of an areal unit to the ethnic composition of the areal sub-units of which it is comprised, with larger differences representing more segregated areas. A methodological innovation of the study was to include a measure of ethnic segregation within neighbourhoods, alongside a standard index of neighbourhood ethnic diversity. Including a measure of segregation alongside diversity is important because a key moderator of the relationship between ethnic diversity and trust is the level of meaningful social contact between groups. Contact has been shown to substantially reduce prejudice between ethnic groups. 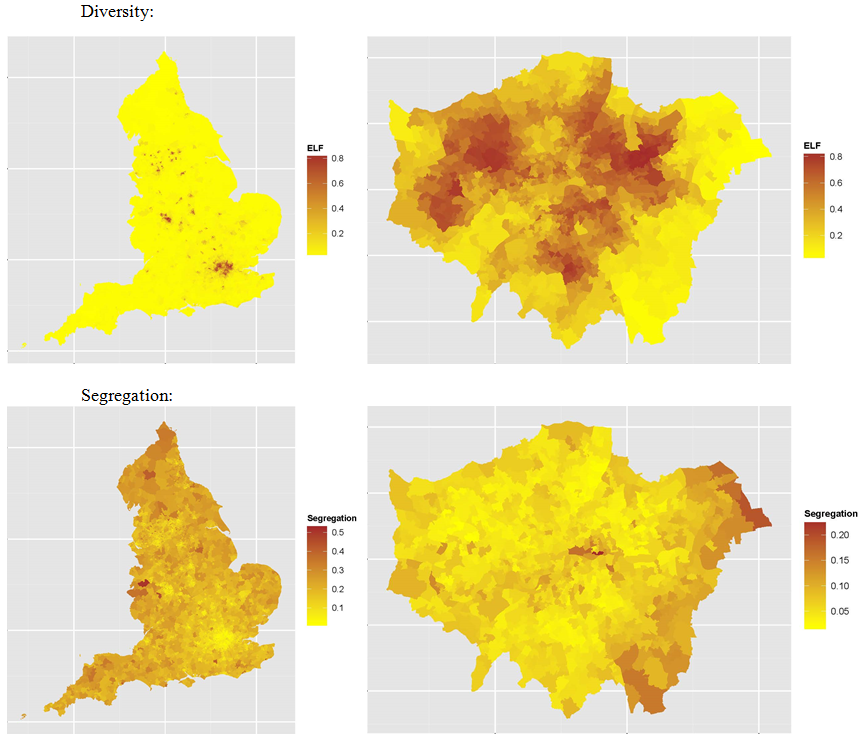 In contrast to the vast majority of existing investigations, we found that residents of more ethnically diverse neighbourhoods actually reported higher levels of community cohesion than those who lived in less diverse areas, once levels of economic deprivation and segregation were controlled for. Those in more segregated neighbourhoods, by contrast, tended to feel their areas were less socially cohesive. An additional insight of the study was to show that these relationships are strongly affected by age. For older Londoners, neighbourhood ethnic diversity is associated with lower ratings of social cohesion, while the pattern is reversed in younger cohorts. This ‘interaction’ effect supports the idea that the way individuals evaluate and respond to ethnic diversity is dependent on their experiences of different ethnic groups during their formative years.

While older Londoners knew a city in their childhoods that was predominantly white, younger cohorts have grown up in and are therefore more comfortable with, a multi-ethnic neighbourhood environment. If the experience of those in one of the world’s most diverse city is tells us something important for public policy, it is that high levels of ethnic diversity within a neighourhood need not result in low levels of social cohesion.

Ethnic diversity seems not, in and of itself, to drive down community cohesion and trust. In fact, in the highly diverse neighbourhoods that characterise modern London, the opposite appears to be the case, once adequate account is taken of the spatial distribution of immigrant groups within neighbourhoods and the degree of social and economic deprivation experienced by residents.

One might, it must be conceded, object to the conclusions we have drawn here on the very grounds with which we have sought to justify them; that London’s unique immigrant and ethnic makeup renders it sui generis and, therefore, of limited utility in understanding how the quantity and distribution of immigrant groups within neighbourhoods will affect community relations in other contexts. While the argument that London’s very exceptionalism makes it of questionable generality carries some weight, it also serves to foreground the coincident imperative: that, the sociologist’s task should not be to determine the effect that ethnic diversity has on community life in some universal sense, but to shed light on the inevitably contingent conditions which give rise to positive and negative outcomes in different contexts.

Ethnic diversity, segregation and the social cohesion of neighbourhoods in London, by Sturgis, P. Brunton-Smith, I. Kuha, J. and Jackson, J. is published in Ethnic and Racial Studies.

Patrick Sturgis is Professor in the Department of Social Statistics, University of Southampton and Director of the ESRC National Centre for Research Methods.

Ian Brunton-Smith is Senior Lecturer in the Department of Sociology, University of Surrey.

Jouni Kuha is Associate Professor of Statistics and Research Methodology at the LSE.

Jonathan Jackson is Associate Professor in Research Methodology and a member of the Mannheim Centre in Criminology at the LSE.